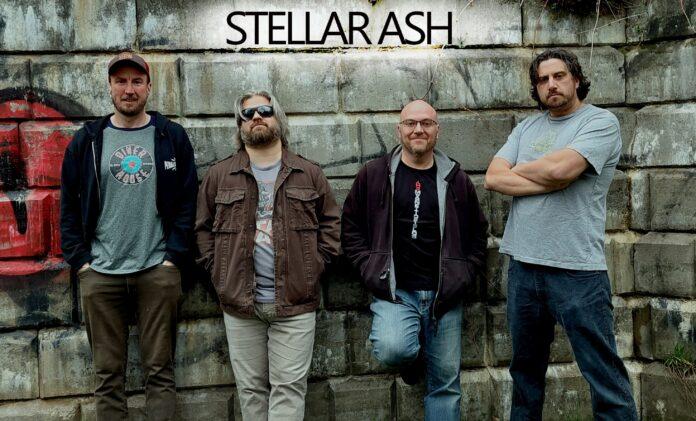 Niagara-based Stellar Ash are finally back to releasing new music since their killer 2019 album, Stellar Ash. Their new songs pack the same punch and depth you’d expect from the band, and their latest single “Be Ok” is no exception. This song boasts a deep groove, sexy riffs, hard-hitting drums, and impeccable vocals. We caught up with Stellar Ash to chat about the song, their creative process, and the coolest show they’ve played.

From The Strait: Tell us about the new single, “Be Ok”.

Stellar Ash: When we were all struggling through the pandemic and lockdowns etc…  It seemed to affect us all in a way that stressed us out and made us more irritable and intolerant.  Everyone seemed to be arguing with everyone.  It’s still pretty much the same now…  This song is a plea to return to common sense while putting the onus on ourselves to make things better.  To have harmony.  To have unity.  To be okay.

Stellar Ash:  For this session, it was mostly Dave Rose tracking every instrument in his home studio and then sending out the demos for us to consume and digest.  By the time the government said we could jam again, we really hit the ground running.  We hit the studio and recorded our 5 song EP in one night and have started releasing the songs this year.  Be Ok was the first one we recorded.  We’re so excited about it!

Stellar Ash:  Right now the whole band is into Conor Gains.  His music is incendiary.  He’s even better live. We played a couple of shows with him this summer and we just love his stuff…  We also really enjoy Mad Mungus, The Minimum Wage, Real Kevin, Ryan Smelle and Whatzername.

Stellar Ash: I think the coolest live show we ever played was  The Smoke Signals Indigenous Cannabis Cup in Tyendinaga Mohawk Territory.  It was like a rib fest-type arrangement but instead of ribbers cooking, it was growers growing.  Everyone would sample different types of cannabis and then vote on the best one.  The winner took home the cannabis cup.  Everyone there was so laid back and really calm…  so awesome!  Plus the organizers went all-out on the sound system.  Stellar Ash is a dish best served loud and thick!

Check out “Be Ok”, the new single from Stellar Ash!