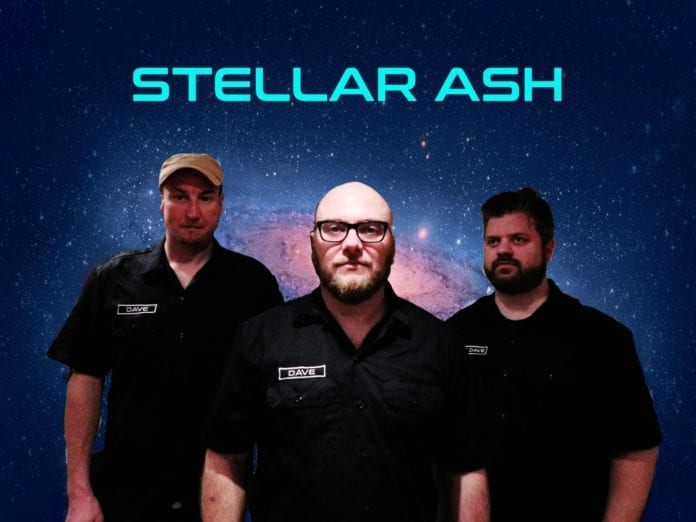 Niagara trio Stellar Ash (comprised of band members Dave, Dave, & Warren a.k.a Not Dave) combines 90s alternative elements with a fresh take on Canadian rock – and the result is unique, yet familiar. A big sound for a small band, with a chemistry rarely found in bands so newly formed.  They’ve just released the lyric video for their track “Watch Me Go”, so we caught up with the guys to chat about the single, their Rock Search experience, and what sets them apart.

From The Strait: How did Stellar Ash get together?

Dave R: In 2018 I booked a show at Mahtay Café to try and get my name out there.  There ended up being a double booking with a YWCA fundraiser, so an arrangement was made for me to open for Don Kerr’s (Rheostatics, Ron Sexsmith, The Dinner is Ruined) band Communism.  I was super stoked, as I was a fan of everything Don had been involved with.  Then the organized messaged me and asked how many people were in my band (I was playing solo).  For some reason, I answered “3”, then started stressing about what I was going to do.  My wife works with Dave, who happened to be playing a cover gig at Puddy’s on the weekend.  She asked if I wanted to check them out, maybe ask if he could join me.  So we went.  I was impressed immediately not only at the bass/drum playing, but also by the smiles on Dave/Not Dave’s faces.  We were introduced, I asked if they would join me.  Not Dave asked, “What kind of music do you play?”  I answered, “Good music”.  He said “OK”, and here we are!

FTS: Tell us about the new single, “Watch Me Go” – what was the inspiration, the recording process, anything at all!

Dave H: This started off as a riff that Dave wrote, them the lyrics came afterwards.  The inspiration for me was to lay a solid bass foundation underneath the driving riff.  Warren and I refer to ourselves as a “bulldozer” rhythm section.  This tune encompasses that.  The approach was the same with recording, we recorded all the instruments as loud and raunchy as we could, and had Frank at Unified Recorders mix it until it was magic.

FTS: If you could play a show with three other bands (Stellar Ash headlining, of course), who would you love to play with?

Dave H: I’d have to go with Pearl Jam, Wilco, and Rage Against the Machine.  Really so I could gear-nerd with the bass players…lol

Dave R: The Monks, Tool and The Rheostatics.

FTS: You guys were in Rock Search last year – tell us about that experience.

Dave H: Honestly, it still feels surreal.  So many bands I grew up listening to were winners or contestants in some capacity.  After we passed each stage and made it to the showcase I kept thinking we were on an episode of Punk’d…lol.  In all seriousness it was great to play that stage with the talent that was included, and great to get the bit of recognition that our music was something to be listened to.

Warren / Not Dave: Rock search was one of the best times I’ve ever had playing in a band, period.  The Warehouse is the best sounding venue around for miles in any direction and we relish any opportunity to play venues like that.  The room sounded great, the audience was awesome, and they said our name a bunch of times on the radio!  That was a real thrill for us…

Dave R: It was a great time. I was a bit shocked at how some bands took it seriously as a competition (I never saw it as a competition, rather as just a chance to play to new people!), but for the most part the bands were like us and there to support each other and have a good time.  The Warehouse is a great stage!

FTS: What sets Stellar Ash apart as a band?

Dave R: We don’t have an act.  We are what we are.  We’ve played with a lot of bands who obviously put on an act on stage.  That’s not us – we love playing, and we will continue to do so whether there are people watching/listening or not.  We have our personality conflicts as people do, but I think the three of us genuinely care about each other.  Outside of my family, these guys are my anchor (and they ground me when I’m being a diva artist asshole – without hesitation).

Warren/Not Dave: We like to have a group-hug when we finish a show.  We smile a lot when we play.  We wear uniforms.

Dave H: We love each other and love what we do.  No matter what happens in the realm of external recognition and success we love playing together and just hanging out.  That is an achievement unto itself.

Check out the lyric video for Stellar Ash’s single, “Watch Me Go” (also available on all streaming platforms).