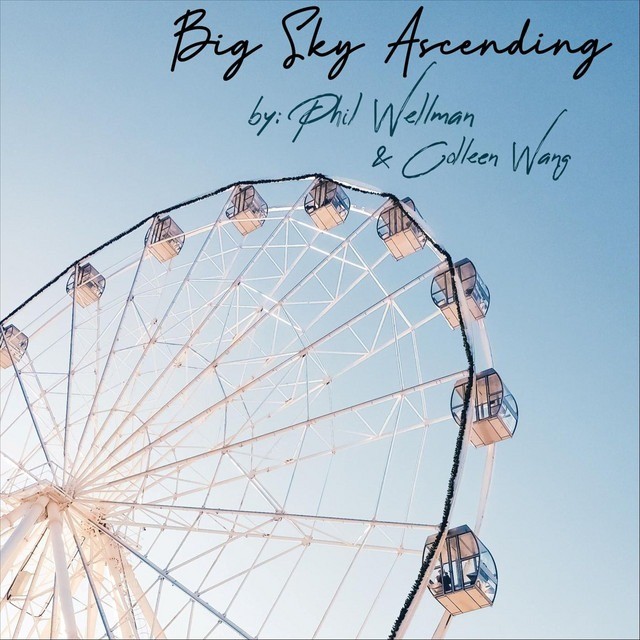 Niagara instrumental musician Phil Wellman has been keeping busy, steadily releasing music and reaching new audiences. His latest release, “Big Sky Ascending” is an indie rock art piece featuring talented violinist, Colleen Wang. We caught up with Phil to chat about the song, what made him become a musician, and his current favourite Niagara bands.

From The Strait: Tell us about the new single, “Big Sky Ascending”.

Phil Wellman: I recorded the initial song in my basement, playing bass, guitar and programming an old drum machine until it sounded right. I called it “Big Sky”.  Around that time I developed a friendship with Colleen Wang through the various instrumental artist circles. We started talking about a collaboration and I pictured her playing on a different song, but she asked to hear some of my new songs. After hearing several – she asked to play on that song. She had a melody and within 24 hours had it recorded. We put it together and this is the result. I knew she would be able to make the chorus take off or lift it and I told her so. Well she didn’t disappoint. “Big Sky Ascending” is part 2. Both “Big Sky” and “Big Sky Ascending” are on my new release Starlight and Rust.

FTS: What made you want to become a musician?

Phil Wellman: I became a musician simply because I fell in love with albums, bands and music around the age of 10. I was constantly buying records and playing them from morning till night. So the idea of me becoming a guitar player or musician was a very natural transition for me. Early on it was the Beatles, Rush, ACDC, Van Halen, Yes, Max Webster – guitar playing seemed exciting, especially after I started to go to concerts. Luckily for me it is still inspiring.

FTS: What sets your music apart from others?

Phil Wellman: My music is all instrumental and features several genres. I try and keep it listenable – sometimes the melody is clearly stated and sometimes it is implied – I do this to keep it a different experience- almost everything heard is usually guitar but I try and avoid the usual guitar clichés.

FTS: Describe your sound in one sentence.

Phil Wellman: Some of my music answers the question- what would the Smiths sound like as an instrumental artist without Morrissey.

FTS: What Niagara bands or artists are on your radar right now?

Phil Wellman: I really like a bunch – Niagara is full of talent. Real Kevin is a great band with catchy songs, The Cabaret Quicksand is another ultra cool band Craig has really found his voice as a songwriter on his new material. Stellar Ash have a great album, Brad Battle, Rival Town, JR Hardy and of course Christian Lalama is super talented and young. There are many more as well- I’m sorry if I forgot you!