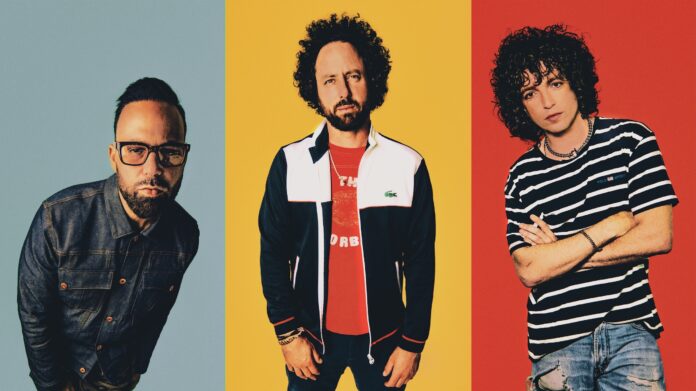 When you take talented musicians from different bands to create another (dare we say) supergroup, you can often expect something unique. With Left Field Messiah, Steve Bays (Hot Hot Heat), Jeremy Ruzumna (Fitz and the Tantrums), and Erik Janson (Wildling) have created a refreshing blend of genres and mix of sounds all their own. They’ve just released their latest single, “Feels Like Summer”, so we caught up with Steve Bays to chat about the music, how the band came to be, and what superpowers each band member would have.

From The Strait: Tell us about the new single, “Feels Like Summer”.

Steve Bays: Ever since I toured on and off for the majority of 17 years, I’ve struggled with enjoying traveling and leaving home, even if it’s for what is supposed to be a relaxing vacation in the sun. Home feels like such a luxury to me, and that is where my studio is, and where I create almost everything I do. So that was the origin of FLS. No matter where I am or what life adventure I’m lucky enough to be exploring…deep down, all I wanna do is go back home. But as the pandemic raged, the song’s meaning started to change to me a bit. I knew that we’d most likely all be able to go out and socialize and be free once again this summer, but I already could anticipate my going out to parties etc, but wanting to just run back home.

FTS: How did Left Field Messiah get together?

Steve Bays: We met in LA on a songwriter’s blind date and we immediately hit it off. We all had similar instincts and ideas about not only what music we thought was cool, but also what gear and pedals and synths we loved. It just flowed in a positive direction from the first minute. No “no’s” and all “hell yeahs!”

FTS: Who were your musical influences growing up, and how to they differ from your current ones?

Steve Bays: Growing up I had a huge box of 45rpm vinyl singles that my dad bought at a garage sale for $2. They were all 50’s doo wop. Which I consider to be the most sugary sweet form of pop music. So my pop bar, for what I considered “catchy” was set pretty high from an early age. As I got older, I started leaning towards listening to artist’s that have their own unique stamp on the production and mixing of their music. I guess I’m a nerd like that. But it leads me to be pretty opened minded as to what I listen to, because there are so many things that can stimulate me from a production standpoint. I love hip hop production cuz it gives me that feeling of pushing the boundaries of acceptable production that punk music gave me as a kid. It could be aerial pink, QOTSA, Mark Ronson’s latest project, Post Malone, Juice Wrld, local bands, French gypsy jazz, 60s /70s Brazilian.. like Antonio Jobim, a lot of old jazz stuff and new hip hop,… I’m usually either looking for songs, production, or overall mood/vibe that gives me a feeling and somehow achieves messing with my emotions. I also like film soundtracks a lot these days…

Steve Bays: This is a weird one but Angelo Badalamenti’s Twin Peaks soundtrack always grounds my vibe..puts me in safe place for some reason. It’s a trigger for something positive from my youth. Django Reinhardt … ideally with Stephane Grapelli. Tribe Called Quest’s Midnight Marauder, Astrud Gilberto and Stan Getz’s ‘Getz/Gilberto’

FTS: If each band member was a superhero, what would their superpower be?

Check out the latest single from Left Field Messiah, “Feels Like Summer”!