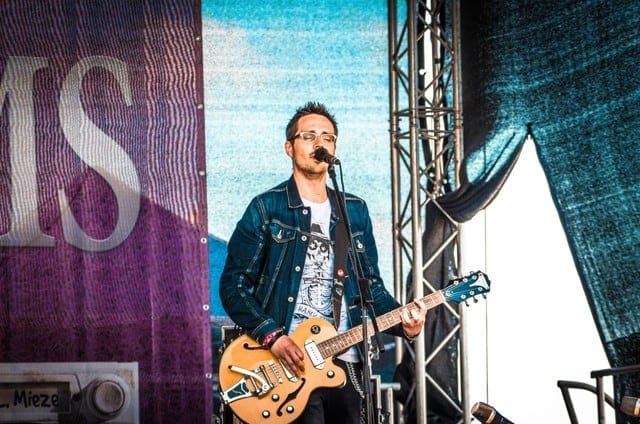 At From The Strait, we come across some great music from all over the world – so we’re kicking off an international section of the site called “Beyond the Strait”, dedicated to artists outside of Canada.

To start, we’d like to to introduce you to Kristaps Bakis – a talented indie musician, songwriter and producer, based in Riga, Europe. He’s been playing for over two decades, in hard rock and punk bands before releasing his two solo albums. He recently released his new single “Apollo 8”, so we caught up with Kristaps to learn more about him and his music.

From The Strait: How would you describe your sound to someone who has never heard your music before?

Kristaps Bakis: I think it’s a blend of everything I like and what has influenced me so far – there’s folk, punk, hard-rock, blues, post-punk, but in the end it sounds pretty much like folk mixed with rock. And even though my music sounds simple and has a common signature, in every song, there’s always an experimental element (experimental for me) – like trying out a new production technique or simply playing mandolin for the first time.

FTS: In your 20 years as a musician, what has been the highlight for you? What are you looking forward to?

I try not to plan too far ahead, because it’s easier to avoid disappointment that way. And it’s easier to change your plans without feeling like you have given up on something. Now, I want to finish my third studio album. And then… I don’t know, maybe I’ll buy a horse.

FTS: If you could tour with any band or artist (living or dead, any genre), who would it be?

KB: Great question. I have never thought about it. It’s really hard to choose… In my perfect world, it would be a new band “The Glorious and Ugly” with Nick Cave, Damien Rice and guys from “Tiger Lillies” performing Elton John’s songs. That would be a really, really cool show.

FTS: Tell us about your latest single, “Apollo 8”.

KB: I’ve always wanted to write a song about astronauts. And I think, “Apollo 8” was the greatest mission in the history of space with all the background, complexity and the way they changed the perception of our planet with the Earthrise photo. And William Anders, the guy who photographed the Earthrise, is still alive today. When you come to think of it, it was 1968 when he went to the Moon, and he’s still alive and can compare the time back then and where we are now. I think, he’s one of the most interesting people on Earth and… beyond Earth.

You Heard It Here – The Window View “Sunset Paradise”

You Heard It Here – Unstuck “Anne-Marie”