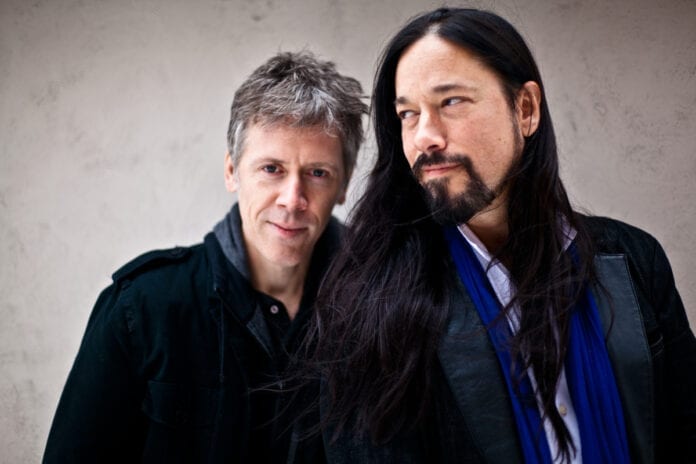 Nearly a decade since their last release, Strippers Union is back with a brand new double album, The Undertaking. We caught up with band members Craig Northey (Odds) and Rob Baker (The Tragically Hip) to chat about how the band began, their unique dynamic, and and (non)guilty musical pleasures.

From The Strait: How did Strippers Union get started? And now, three albums later, does the project feel different?

Craig Northey: Rob had a bunch of music that existed outside what the Hip were using and was looking for someone to collaborate on words and melodies. We were longtime close friends so, through nepotism, I saw my opportunity and snagged the gig before the open auditions even happened. I’m a pretty cutthroat mercenary dude as anyone who knows me will attest. I’m pretty much a music biz wolverine.

Three albums later we still have as much fun doing this as ever and maybe each note means even more to us. The first album was a great diversion and excursion from our regular creative situations. The second one was more of the same and we laughed just as hard. Both of those were made relatively quickly with a band in a room in a world before pandemics.

This third album was written in much the same way but Rob did a lot more work in Kingston, by himself creating finished tracks. These later benefitted from a trip to Vancouver where the rhythmic ESP of Doug Elliott and Pat Steward was added. A lot of the singing and post production was then done remotely and collected over the net. We weren’t together in the same way but we can have a party later. This album feels both hard fought and easy. Hard fought because it took a while and any double album takes work. Easy because our collaboration is a well oiled machine…if you don’t look the wolverine in the eyes.

Rob Baker: Ive never wanted to be a solo act. I love bands and I love being in a band, so when the musical ideas were starting to back up and clog up my creative pipes I needed to call in a professional plumber… maybe Craig is like my Marie Condo, bringing order  – helping me figure out what is of value and what goes in the dumpster. At any rate, music has never been a job for me – it’s a love that’s shared between friends. It only made sense that I’d call up a beautiful friend who also happens to be a musician that I’m a fan of.

FTS: Being from such iconic Canadian bands, do you ever get sick of hearing people cover your songs? (And if so, let me apologize in advance for a cover we posted last year of “Someone Who’s Cool” with an interlude of “Blow At High Dough”.)

Rob Baker: I love it. One night I walked into a bar in Vermont and a full on metal band was doing a medley of Hip tunes – it was weird and wonderful. Recently I received links to a Dutch band covering “Bobcaygeon” and an Italian gentleman doing a really moving version of “Long Time Running” en Italiano. It is so gratifying to see the songs grow up and move out and go to work – have a life of their own independent from their parents.

FTS: Every songwriting collaboration has its own unique dynamic – how would you describe yours together?

Rob Baker: The simple breakdown is music and lyrics. I play Craig, or send him, pieces of completed music – I don’t really think of them as demos because I put a lot of time into trying to make them complete or finished, but I try to leave space for Craig to do melody and lyrics. If he responds to an idea then it happens very quickly, usually after a conversation about what the music might suggest on an emotional level, or perhaps whatever we feel we want to write about. If were sitting face to face well get 2 or 3 songs done in a day.

Craig Northey: There are no musical guilty pleasures. All music is valid. Is there something I absolutely love that might surprise someone that I love it? I love classical music. I grew up on it. I loved a lot of disco when the man told me I shouldn’t love it. I’m a retro soul music freak…and guess what…so is Rob.

Rob Baker: Yeah, I don’t feel guilty about any music that I like. I love Barry White, early Bee Gees,  Roadhouse Country like Merle Haggard, George Jones, Faron Young, Ray Price… Ive always loved Big Band music – Artie Shaw, Tommy Dorsey, Benny Goodman. Theres just so much good music and style names and boxes are primarily only of use in the marketing of it.

FTS: If The Undertaking was released during non-pandemic times, what would your ideal release show have looked like? Venue, openers, etc.?

Craig Northey: Well…the Stones would be on the road too so we’d probably be on that bill. We would have to flip a coin to see who opened. If there was a disagreement then I would release the wolverine.

Rob Baker: Personally I love the format of the old style musical revue – a house band like Booker T and the MGs in a bunch of different permutations with different vocalists and guests. Ms Emily could step up and take the lead for 4 or 5 tunes, feature the horns on a couple of numbers, throw in a couple of Odds and Hip tunes, get some friends to guest – a few tunes each.

Check out “We Are The Underworld”, the first single from Disc 1 of Strippers Union‘s new album, The Undertaking!