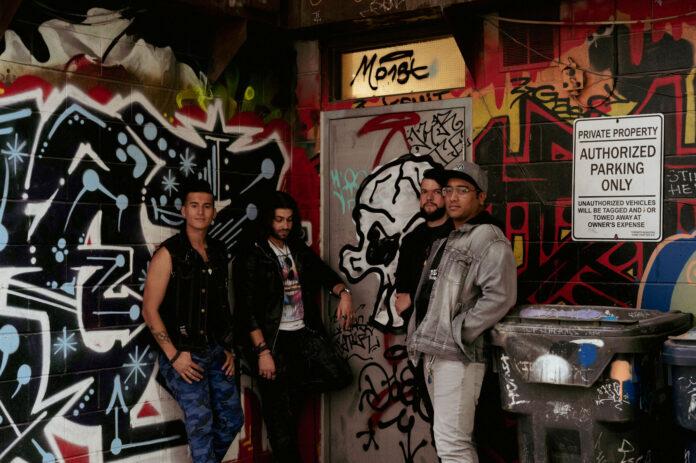 Toronto-based rock ‘n rollers One In The Chamber have recently released their long-awaited sophomore EP, Reload. The new release offers the raw, hard-hitting, classic rock-tinged sound fans have come to expect, but with a fresh approach. We caught up with Gerrod and Christian to chat about the EP, their recently announced spot in this year’s 97.7 HTZ FM Rock Search competition, and the Canadian bands they currently can’t get enough of.

From The Strait: Tell us about your new EP, Reload. What was the creative process for the songs?

Christian Dotto: Reload is a collection of our best material, following our debut EP, I’ve Got Something To Say…, which we slowly began writing in late 2018.

Gerrod Harris: Most of the songs on the album came together organically – often jamming on a riff or progression someone brought into practice. It’s a really fun and spontaneous way to make music. The album itself was recorded at Phase One Studios with Murray Daigle back in early 2020. Words can’t describe how exciting it is to finally have it out there.

FTS: You’ve just landed a spot in this year’s Rock Search competition from our own local Niagara station, 97.7 HTZ FM – how does that feel, and what would it mean to win?

Gerrod: Rocksearch has become an institution for Canadian music. Just to make the cut for the top 16 – let alone the idea of winning – is a massive honour.

FTS: How did One In The Chamber get started as a band?

Christian: One In The Chamber was formed in late 2015, when Cecil and Mike had met at a songwriters event. Soon after, Cecil had approached Gerrod, while working at a York University pub called The Absinthe. Gerrod was filling in as a drummer for the bar’s jazz band that night. Finally, I knew Cecil in high school, so eventually, I’d reached out to him after his brother told me that Cecil was looking for a bass player for his new band. Thus was the beginning of One In The Chamber.

FTS: What has been your favourite venue to play? (And what, in your opinion, makes a venue great?)

Gerrod: Last weekend at The El Mocambo was a major milestone for us. We celebrated the release of Reload at one of Toronto’s coolest venues; something that was at the top of my list of goals for the year. It was incredible! That being said, The Hideout and The Bovine Sex Club are always a good time.

Christian: For a long while, The Hideout was one of my favourite venues to play at. However, I’m with Gerrod in saying that playing at the newly renovated El Mocambo was absolutely thrilling. I’m eagerly looking forward to returning there in the future. What I find makes a venue great is its vibe. The late Hideout felt like a music venue, a bar, and a lounge all in one, and it really felt like home, every time I walked into it. For me, the stage doesn’t have to be massive, as long as the venue feels comfortable. That being said, though, getting to play at The Rose Theatre was an amazing experience, as well.

FTS: What are some other Canadian bands you’ve been listening to lately?

Christian: Oh yeah, the new Drop Top Alibi rules! I’ll also throw on some Sumo Cyco every once in a while. The Jailbirds, and Stone Cold Crows are great listens, as well!

Gerrod: All of those and more! There is so much amazing independent Canadian artists making some really unique music right now.

Check out the video for “Blow”, from their new EP Reload!