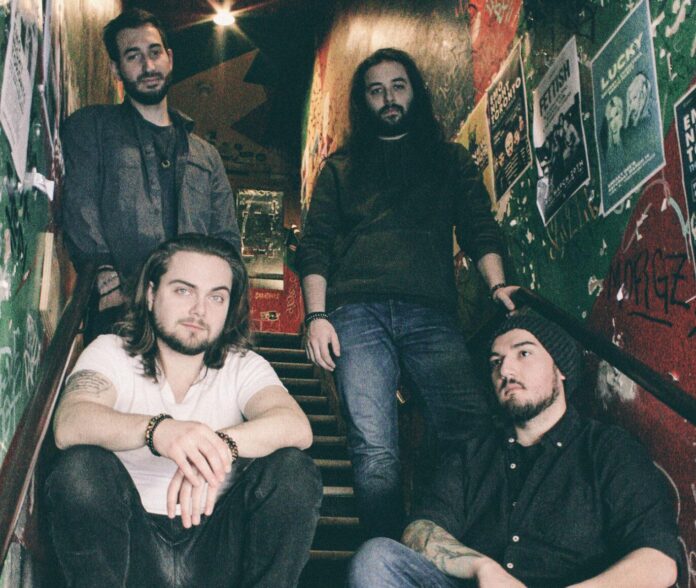 Toronto-based rock band Drop Top Alibi have just released their new single, “Dylsong”, the first release in the “new era” of the band. After having to cancel their 2020 Canadian tour, they spent time writing and experimenting with new sounds and ideas, using more vintage methods to record their songs. We caught up with the band to chat about the new singles, how winning Rock Search in 2019 changed things for them, and what’s next for DTA.

From The Strait: Tell us about the new single, “Dylsong”.

Drop Top Alibi: “Dylsong” is the first single for a new era of the band. We spent a lot of time writing and rethinking our production approach during the pandemic, and we’re now sitting on a ton of new music! This tune was very collaborative, with all members contributing either melody parts, or musical parts. It was our first pandemic baby really haha.

It’s a song written about the depths I (Brando) went to mentally during the first part of the pandemic in 2020. It was a new world to process, and coping was difficult early on. This song was a raw and authentic story about that experience for me.

We used “Dylsong” as our trial run for working with our producer Graham Shaw. We wanted to start recording our music live off the floor, to really capture the energy and dynamic of our live show. Needless to say, we were really happy with it, and have launched full force into recording all the songs we’ve written over the last 2 years.

FTS: How did Drop Top Alibi become a band?

Drop Top Alibi:  Dylan and Brando have known each other for over ten years now and have been involved in different projects over that time. The idea of DTA really started to come together in 2016, especially once Jeff came on board to help get the first EP recorded. Once the Gilby Clarke sessions were done, and the EP was rounded out we were introduced to Luc which really solidified the line – up moving forward. Everyone crossed paths organically, and in musical settings. We were all drawn to each other’s abilities and things just came together naturally over a couple of years.

FTS: Back in 2019, you guys won the Rock Search competition here in St. Catharines – how did that change things for the band?

Drop Top Alibi: Yea that was a really fun time for us. Growing up listening to HTZ, obviously we had always wanted to participate in Rock Search, and 2019 was the year they selected us to their Top 16. Once we made it through to the Live show rounds, we had a lot of confidence in our ability to go all the way. We were dialed in, had been playing a ton, and had a lot of new songs coming out at the time as well.

When we found out that we won, immediately they placed “Burn” into their permanent rotation for what ended up being close to six months! We got to play with bands like I Mother Earth, Finger 11, and The Wild! And we found ourselves being able to book a national tour across Canada with some radio support as well. Unfortunately, that tour was scheduled for 2020, and didn’t end up happening, but the Rock Search win helped us make some big steps forward, which helped make other things happen. We’re looking forward to getting back to that place with our new era of songs now.

FTS: Who would you say are the band’s biggest musical influences?

Drop Top Alibi: The bands that have always had an impact on the band, regardless of where our songs were at are Soundgarden, Queens of The Stone Age, RHCP, Alice in Chains, Tool, Deftones, Jane’s Addiction, and Oasis. Obviously, the classics like Zeppelin, and AC/DC have played major roles too. But Drop Top has definitely taken on a heavier and more alternative approach to song writing and creating.

FTS: If you could curate a festival (with Drop Top Alibi headlining, of course), what other bands would you want on the bill?

Drop Top Alibi:  Damn, well we’d definitely want some of our homies on the bill like “We The Crooked” “Ready The Prince,” and “Cleopatrick.”

But we’d want all our hero’s there too haha likely be a three day festival. Get QOTSA, RATM, RHCP, Jane’s Addiction, Turnstile, Tiger Cub, Tool, Pearl Jam, Idles, try and get an Oasis reuniting to happen lol it would be the greatest festival ever.

Drop Top Alibi:  We’re locked into the studio and getting set to release a ton of new music this year and next. The summer times got some exciting live shows happening, and hopefully some touring discussions come together for the fall, but we’re focussed on new music. Whatever happens with this covid thing, we have our next 18 months locked into getting new music out to as many people as we can!

Check out “Dylsong”, the latest single from Drop Top Alibi!