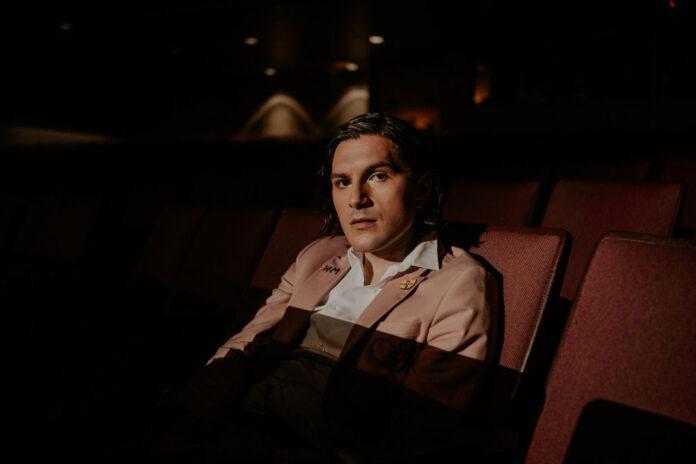 Here at FTS, we’ve had Hotel Mira‘s Perfectionism album on repeat since it first came out. They’ve recently dropped a fantastic new video for “The Eyes On You”, featuring a bit of a farewell to their Perfectionism era. We’re always glad to chat with frontman Charlie Kerr, so we caught up with him to talk about the making of the video, what he’s been up to while the world shut down, and what he might be doing if wasn’t a musician.

From The Strait: Tell us about the process of making the video for “The Eyes On You”.

Charlie Kerr: It was a lot of fun. The crew were really kind and creative people. So, lots of cracking jokes. And Lindsey is just immensely talented so it was easy to let her drive the ship. We had some great discussions in terms of what we were going for leading up to it, so it was mostly just a good time.

FTS: Our last chat with you was right before the world shut down. How has the past year and a half changed things for you?

Charlie Kerr: I wrote a lot. I wrote a screenplay and an album’s worth of material and filmed a starring role in a tv show that comes out not long from now. We were lucky enough to have success on the radio and had a lot of people consider “Perfectionism” their quarantine album. Which was cool for a bunch of reasons. At times I thought maybe I would never get to perform live ever again which I weirdly came to terms with but I still practiced my singing for hours a day. My dad had a health scare which kind of put a lot in perspective for me. It was a whirlwind that’s for sure.

FTS: If you weren’t a musician or actor, what do you think you would be doing instead?

Charlie Kerr: My set of skills is almost comically limited. This is pretty much the only thing I have ever excelled at. But maybe I would try my hand at stand-up or something? I am a good listener, maybe I would make for a decent counsellor. But for better or worse I kind of feel as though I am right where I belong, telling stories etc.

FTS: What would you say is your all-time favourite Hotel Mira song? Are there any that you’re no longer a fan of?

Charlie Kerr: I think my favorite HM song is either “Speaking Off The Record” or “This Could Be It For Me”. They both did a lot for my career and I felt like I never compromised while writing either. Some of the really early songs I don’t really recognize myself in anymore. But I think that is healthy. I like growing and changing. And I think everything was necessary, creatively to get to this point. The trial and error of making The Matt And Sam’s Brother record comes to mind as it was an amazing learning experience that I think taught me a ton. Essentially, it all feels valuable in retrospect even if it’s not exactly how I wanted it to sound. I listen to Circulation and I am proud of how bold we were but it feels like I am listening to someone else’s band. It’s surreal but I kind of love it.

FTS: If each Hotel Mira band member was a superhero, what would their superpower be?

Charlie Kerr: I don’t know if they count as superheroes but I feel like the band dynamic is almost identical to the teenage mutant ninja turtles. With me Being Leonardo, Cole being Raphael, Clark being Donatello and Mike being Michaelangelo.

Check out the brand new video for Hotel Mira’s, “The Eyes On You”!