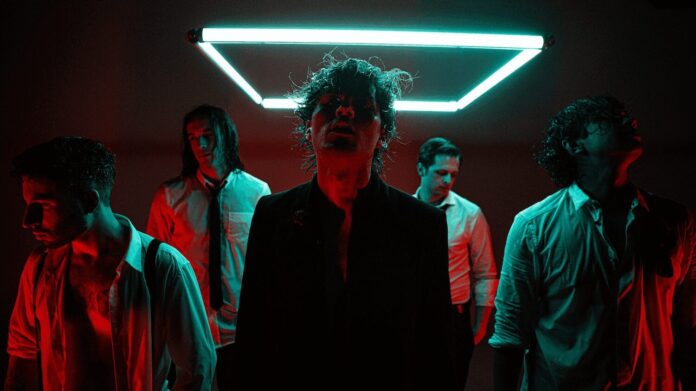 If you’re a regular FTS reader, you know how much we dig Hotel Mira. With the release of their new album Perfectionism, we had the chance to preview the record and have another chat with frontman Charlie Kerr.

At first listen, the entire album offers the pop-rock sensibilities and the clever, personal lyrics you’d expect from Hotel Mira (Charlie and fellow band members, Colton Lauro, Mike Noble, and Clark Grieve, respectively). But there’s much more to it than that. In some ways, the album unfolds like a story, each song acting as a chapter with its own subject, building to a satisfying and epic conclusion with the ending of the final song, “You Know Best”. If you already know and love the released singles, the rest of the tracks on the album are gems as well. It’s a perfect package.

We talked to Charlie about the new album, the artists who influenced him most, and the importance of talking about personal fears.

From The Strait: Tell us about Perfectionism – what the album means to you, the process of making it, how you chose the title… anything!

Charlie Kerr: The album was inspired by love and loss and making it was actually a pretty exhausting task. And ethically I didn’t know what I should hold back on in terms of revealing things about my personal life and others around me. I picked the title because “perfectionism” is a horrible condition but it is pretty glorified societally and I wanted to shed light on that. Also I thought it described the glossy nature of the music and the jagged feel of what was being said.

FTS: With streaming services making it so easy to consume music so quickly and move on, how do you manage to keep fans loyal and invested?

Charlie: I think I try to think of what I want to see out of the art I like and then do that. Big risks, write from the heart, fearlessness? Freakyness? Our fans are incredible and they have stuck with us in the most caring and cool ways so I don’t know I just keep trying to top myself and give people something new

FTS: You are one of the few singers these days who is born to be a frontman – what live shows have influenced you throughout your life? Is there a standout one that made you say “yes, that’s it, I want to do THAT”?

Charlie: First of all thank you. That does wonders for my ego to hear that. I think Julian Casablancas, St. Vincent, Iggy Pop, Kurt Cobain and Jim Morrison come to mind, and also Frank Ocean and Karen O. I like any sort of performer that makes me go “oh my god I didn’t know we were allowed to do that”. But yeah, Julian and Kurt in particular, they were kind of my roadmaps in terms of what I wanted to represent when I hit the stage.

FTS: We love the video for “This Could Be It For Me”. Your explanation for the single is “This song was written about when I went to a concert, and I was in a spell of PTSD and I no longer wanted to be alive. But I kept a straight face and tried to enjoy the concert all the while wondering how many other people in that room were feeling the same dread as I was.”
As someone who has experienced this exact situation more times than I’d care to mention, it speaks to me on a very personal level. What’s your advice to others who can also relate? How do you get through those moments?

Charlie: Oh man, I think those moments and situations are so overwhelming that the only advice I have is “don’t do anything drastic” and be gentle on yourself. Like mostly if I am in that state I try to remind myself that these states aren’t permanent. I find venting or talking my fears out to someone who will listen is better than bottling them up, too. I have a lot of self-destructive tendencies so I just try to let those tapes play if they need to. I hope that makes sense.

Check out the video below for “This Could Be It For Me”, and have a listen to their new album, Perfectionism, out today!