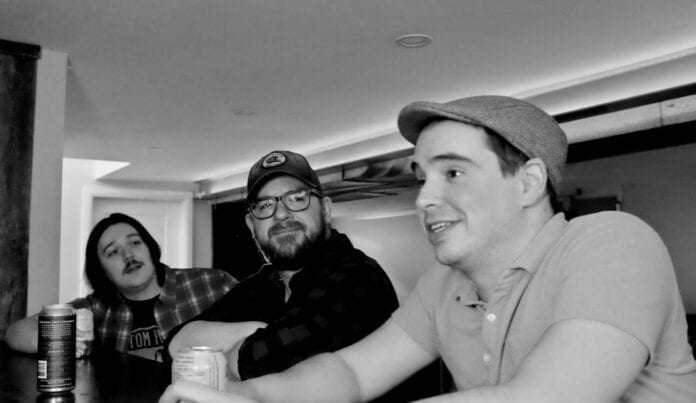 Niagara trio The Minimum Wage are an indie alt-rock band with an eclectic range of musical influences that come through in their music. They’ve just released their debut single “White Rabbit”, so we had a chat with the guys to talk about the new release, how the band got together, and each member’s superpower.

From The Strait: Tell us about the new single, “White Rabbit”.

Nolan: We record/write all our stuff remotely because of Covid. We were just finishing up a different song when Sandro (who’s a bit of a machine when it comes to recording/writing) sent over WR basically fully formed. Sterling and I just had to put our signatures on it and it was done. I knew I wanted this to be a proper single so we enlisted the help of Ryan MacDonald at Lionheart Studios. Aside from being the frontman of The Honest Heart Collective – Ryan is also a producer/mixer/master wizard and we gave him the reigns to put his spin on WR. He worked his magic and the result what you hear now.

FTS: How did The Minimum Wage get started as a band?

Sterling: Really it was just a matter of the love of music and good timing. Jodes and I had been social for a few years leading up to the band happening and any time we talked music there was always a mutual appreciation. Once he introduced Sandro things just kind of clicked. Everyone has drastically different tastes and styles which somehow is complementary, it’s a lot of fun to write music with people who challenge themselves.

FTS:  Who were your biggest musical influences growing up, and how do they differ from your current ones?

Rocco: I was stubbornly routed in classic rock and alternative rock staples growing up. Picking up and learning different instruments really broke that. Today, my listening choices are very scattered. In any hour, I’ll go from Buck Owens to Drake to Niels-Henning Orsted Pedersen to IDLES.

Sterling: My first musical obsession was MC Hammer. Michael Jackson is still the King Of Pop, a lot of alt rock and MuchMusic in the 90’s, nu metal, the birth of rap rock… I’ve seen some shit. Over the years learning new styles and articulations is something that never gets old. I would say that a lot of the music I used to love I still do, but I used to too.

FTS: What sets The Minimum Wage apart as a band?

Nolan: I think what sets up apart is the lack of ego or expectation we have as a band. Certainly we want to be heard and eventually seen by people who dig our music – but that’s not the end goal I think. I feel we’d be just as happy having a database of songs that just our family and friends hear as we put them out there into the ether. The other thing is that we aren’t afraid to write genre bending music – what’s pop? What’s rock? What’s country or folk anyway? We don’t care – it’s just music that moves us an any given time. Genre is over!

FTS: If each member of The Minimum Wage were a superhero, what would their superpower be?

Rocco: I am not a superhero person, at all; but I’ll give this a shot. Nolan would be seeing into the future. He’s got this really incredible foresight and uses that to navigate the ship. Sterling would be regeneration. Since I’ve gotten to know him, he has been in a constant cycle of unfortunate events resulting in some kind of injury. Somehow he just bounces back, good as new. For myself? The power of… waking up early? I’m generally up by 4am and using the few hours I have to myself to record demos and practice.

Check out “White Rabbit”, the debut single from The Minimum Wage!