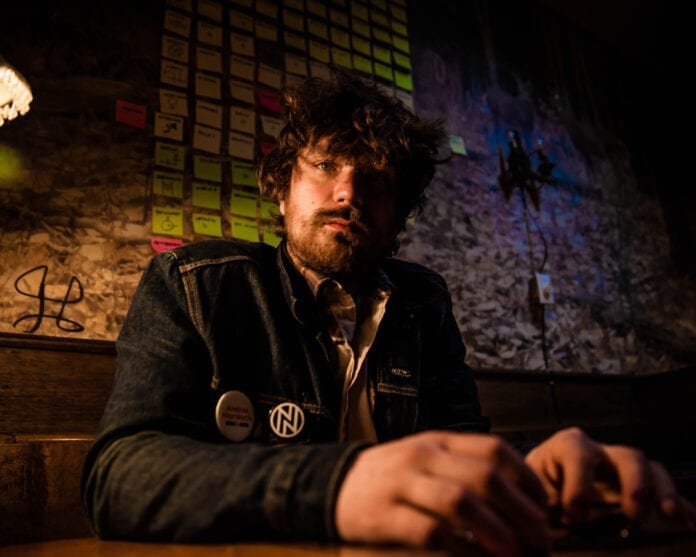 Toronto-based musician Eamon McGrath has a body of work that would impress even the most cynical music fan. Having just released his new single “April” (fittingly in April), we had a chat with Eamon to learn more about the music, his most memorable show, and what first influenced him to become a musician.

From The Strait: Tell us about your latest single, “April”.

Eamon Mcgrath: “April” was recorded last spring in my own studio in downtown Toronto. I gave myself a quota of writing one song a day and have more or less kept up that regiment. At this point, I have more than enough new songs to release a new full-length record every six months for the next five years. The first of these I titled Bells of Hope, from which the track “April” resides on. The release date is to be announced.

I made a point of involving everyone I could in the recording of these songs, and tried to find some musical freedom or liberation at being un-beholden to a recording budget or time schedule. For example, when John Paul Peters and I were recording Guts at Private Ear, lots of ideas got tossed around about trying to bring a horn section, or a string section, and people kept on turning up unavailable for the time we had the studio booked, so those ideas sort of fell to the cutting room floor. We encountered the same situation with Young Canadians, and some vocalists who we tried to bring into JCDC to track. They ended up never being able to show up.

A nice thing that came out of having all the time in the world and all the availability in the world to record was that no one could really say no, and because no one was touring, no one wanted to say no. Everyone wanted to collaborate. Joyful Joyful are my favourite Toronto band, and Cormac was available to do some vocals on the song, so I sent them the track and they sang on it, and we had this amazing collaboration that might have never happened if I’d paid a lot of money for a long studio session.

FTS: What first influenced you to become a musician? Was it a song, an artist, or were you just drawn to it?

Eamon Mcgrath: The first and foremost influence was undoubtedly The Clash, both musically and as a concept. The Clash was like an international force of rock and roll that tore down every border, both politically and musically, by traveling to every corner of the world and playing every type of music in it. Funny enough, the first Clash record that really blew my mind wasn’t any of their studio stuff, it was From Here To Eternity, a compilation of jaw-droppingly energetic live recordings from places as diverse as London, Ho Chi Minh City, New York, Rio de Janeiro — at least as far as I can remember — during the 80s when the band was at their absolute peak. It fascinated me how you could amalgamate all of these sounds and influences into one, distinct style and also export that in such a way that found universal appeal and also contributed to politically inspiring quite literally millions of people. I’m still blown away by them and that record in particular to this day.

FTS: Thinking back to “before times” (when shows were still happening), what was the most memorable show you’ve played? Good, bad, weird… anything goes!

Eamon Mcgrath: There’s just so many. One that sticks out though was a show on April 19, 2019 in Okayama. We were playing this tiny little upstairs venue and had to be up at some ungodly hour, like 5am the next morning to catch a train to Kagawa for an afternoon show. The show was packed. My record, Guts, was being released the next day internationally. At that show, about as far from home as you could ever be, we played the title track from the album and everyone in the crowd started singing along. Just yelling “GUTS!” at the tops of their lungs. Barely anyone there spoke a word of English, and despite that, they all knew the song. Maybe it was the jet lag, or the hangovers, or the constant non-stop twenty-four hour barrage of neon lights in Japan’s huge cities, but when we got offstage everyone in the band was kind of awestruck by it. It was a really magical moment.

Eamon Mcgrath: A musician gets to a point in their lives where it’s hard to separate the listening of music from the studying of it. All my favourite songwriters and bands (The Replacements, The Clash, Neil Young, Bob Dylan, Gram Parsons, Black Flag, Minor Threat, Wolf Eyes) have been so heavily scrutinized and mulled-over by me that it’s hard to just sit back and enjoy it without examining it and still after all these years trying to figure out how they pieced it all together and came up with those ideas. My favourite music as of late — and I mean this in a good way — is the stuff that I can just put on and ignore and enjoy. Lately I listen to nothing but Alice Coltrane, Stars Of The Lid, Hiroshi Yoshimura, Talk Talk, Brian Eno. All that stuff is at times incomprehensible to me in its creation, as in I really do have no idea how a lot of it was conceived or made, but it’s just so fucking beautiful that that’s all I end up thinking about. That’s the kind of music I want to make, I want to just make people concerned or focused on nothing else but the sound of the song.

FTS: You have a rare ability to change musical styles without compromising quality – how would you describe your overall sound to someone who has never heard you?

Eamon Mcgrath: Gram Parsons had maybe the best term to describe what he did: “Cosmic American Music”. He took soul, blues, gospel, country, and rock and roll, and funnelled it through the psychedelia of the 60s to come up with the unique and unprecedented sound that he championed. I like to think that if Gram hadn’t died before the punk movement, or American hardcore, or Detroit techno or Chicago house, or Seattle grunge, he would’ve thought that all of that was probably Cosmic American Music too. I like to take that spirit and assign a colder, northern tone to it, its darker, younger, more brutal Canadian cousin.