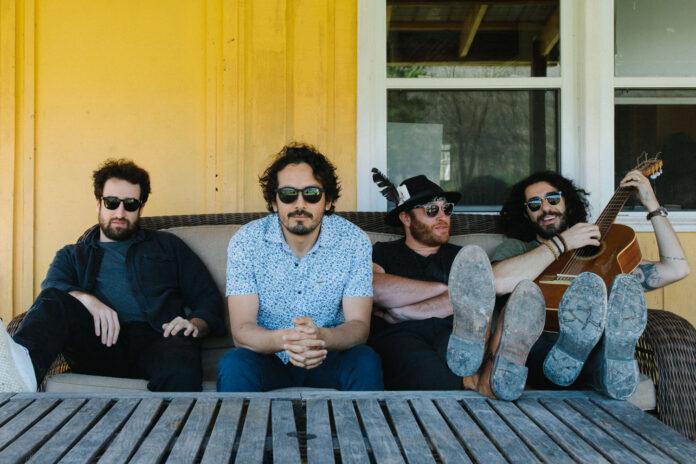 Offering a Northern take on southern Americana, The Honeyrunners are set to release their debut album this October. They’ve just released “Mixtape”, their latest single from the album, so we caught up with them to chat about the new music, guilty pleasures, and advice for musicians just starting out. Plus, singer Dan Dwoskin shares a playlist of his favourite current tunes.

From The Strait: Tell us about the new single, “Mixtape”.

The Honeyrunners: Mixtape is the brainchild of Guillermo Subauste; he brought this infectious rhythm to the studio one day with a crisp bass line, and the song took off from there. There are too many influences to name when it comes to the melody lines and the pacing – it was an experiment in 80’s glam with modern production, breakneck drums, and a Springsteen-esque pop vocal delivery. We emerged with something new and old, all the same. And we loved it.

The cherry on top were appearances from singers Carleigh Aikins and Meg Contini. Their harmonies are insane on this track; so many ranges. Watching these two lay down vocals in studio is nothing short of a masterclass.

For months, we have been working with Toronto animator Mathew den Boer on a music video for “Mixtape”. It’s a nostalgic free-for-all, with classic style blends of Saturday morning cartoons and the haunted inner workings of an old tape deck. It’s nothing short of work of art, surfacing online in mid-October.

FTS: How did The Honeyrunners get started?

The Honeyrunners: It all started with a porn-rock band on Universal called Wank Punter in 2009. It’s a really long story for another day. In short, after WP, we began to collect great players until we had ourselves a Canadian rock n’ roll band.
So many great players have come and gone; bands are often a river, and that’s just fine. The music of The Honeyrunners continues to evolve, and we continue to discover sounds that excite us, players that teach us, and great stories that need telling.

FTS: What can we expect from your upcoming album, Everything is on Fire?

The Honeyrunners: “Everything Is On Fire” is a roller-coaster, lots of highs and lots of lows. In short, “we write songs for the times we need them”. The album exists at the intersection of pop, rock, Americana, blues, and soul. Three years in the making, this 9-song body of work is a testament to great collaboration, obsessive production, and musicians with a lot of heart. It stemmed from anxiety, love, fear, and an obsession with finding new sounds that excite us, with a nod to music’s rich history. Production has been a huge part of our project – it makes all the difference, both on record and on stage.

The Honeyrunners: I don’t feel guilty over music any more, perhaps when I was a teenager. Here’s a playlist I make with my current obsessions: https://open.spotify.com/playlist/7lVkavu0NOG4RU9kwR7i21?si=3239fea834f043fa

FTS: If you had any advice for new musicians, what would it be?

The Honeyrunners: To the new musicians – no one here really knows wtf they’re doing. We’re all imposters; some of us have just been doing it long enough to actually learn a thing or two.

Learn the ropes, be humble, understand the merits and shortcomings of your own character, push for your good ideas, always listen to the muse, and enjoy the ride. There is still magic out there, but it ain’t free.

Check out the latest single from The Honeyrunners, “Mixtape”!