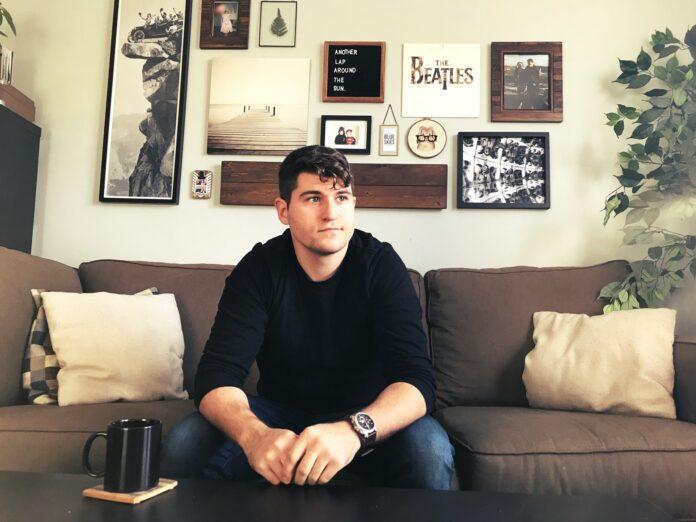 Canadian alt-rock artist Contour (also known as Kayle Goguen) has taken his music in a different direction with the brand new single, “The Lighthouse and the Sea”. Known for heavy guitars, pulsing rhythms, and fierce vocals, the latest offering takes on more of a polished, singer-songwriter approach. We caught up with Kayle to chat about the new song, how he got his start as a musician, and what question he’d like to be asked in an interview.

From The Strait: Tell us about the new single, “The Lighthouse and the Sea”.

Contour: Well it’s definitely a departure from my usual sound. I’ve been writing a lot more acoustic stuff lately, probably from being isolated during COVID i think. I really wanted to stay outside my comfort zone on this one. No drums, no heavy build up. Just good lyrics and tasteful guitar and some subtle stuff for sonics.

It’s a love song, but i think what makes it different is that it’s riddled with hesitation. I think it’s more about learning to let yourself be vulnerable and open to love.

Contour: It all started with a shitty Nintendo-sounding Ibanez Gio I got for Christmas when I was 13. I played that thing everyday and learned every Billy Talent & System of a Down riff i could.

I started writing songs and playing in bands as a guitarist around 15 and eventually I picked up drums and bass because I hated trying to program them for demos. I was too shy to be a singer but a band I was in needed a replacement singer and I just tried it out.

Contour: As I mentioned, Billy Talent & SOAD were big for me learning guitar but I also grew up listening to Pink Floyd and Zeppelin in my dads car. My older sister and brother turned me on to more alternative rock type stuff, I’d always steal their big shiny tunes cds.

In high school I branched off with a mixture of sad/heavy music: Brand New, Thrice, Radiohead, Matthew Good, Mogwai, & Underoath.

Contour: Usually starts with a riff or chord progression I like and then either vocals or drums come next. I just build an arrangement in my head or start demo’ing parts into my Mac. For lyrics it’s usually a concept or something that interests me and I’ll just build and see what fits.

For me the instrumental comes easy. I think I could write the basis for an instrumental rock song in an hour but then comes the long arduous task of writing lyrics, which takes me far too long.

Contour: Uhmm… I guess it’d be
What do I want Contour’s music to stand for?

I really want my music to be diverse but to still stay grounded in being human. I want to make music for the people who appreciate what a real band sounds like and enjoy the imperfections and push and pull of rhythm.

I think pop sensibilities are starting to make a lot of new production sound so inoffensive and bland. I think things are too focused on “vibe” and aesthetic. So I want to keep writing stuff that bends on different genres but keeps the focus on raw emotion and doesn’t shy away from instruments and the actual music at play.

Check out Contour’s latest single, “The Lighthouse and the Sea”!