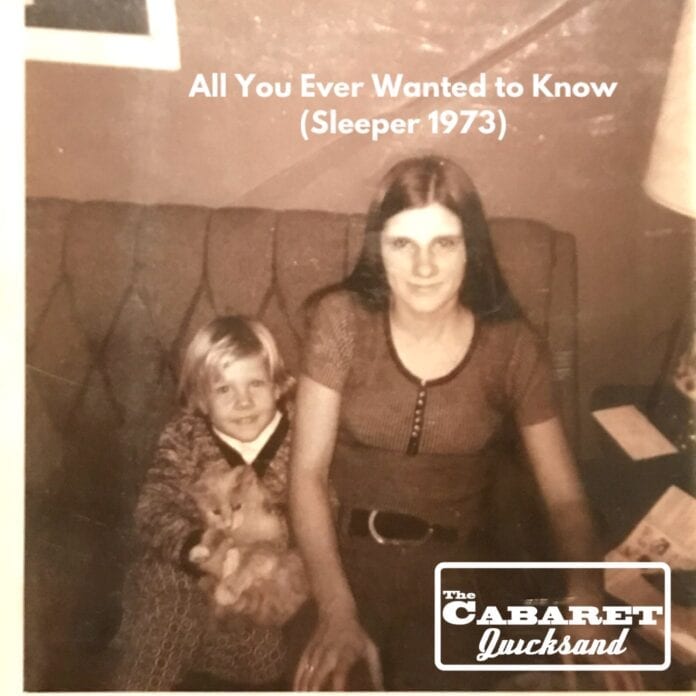 We’ve got Craig Rewbury of The Cabaret Quicksand back on FTS! With the brand new single “All You Ever Wanted to Know (Sleeper 1973)” out now, we chatted with him about the new song, musical influences, & filling out his dream bill.

From The Strait: Tell us about the new single “All You Ever Wanted to Know (Sleeper 1973)”.

Craig Rewbury: The song is a fantasy about what it would be like if your older, experienced, wiser self could advise your younger self about the decisions you should make while living your life.  Would it be a good or bad idea to push you through all of that stuff undamaged or should you fall down and make those mistakes on your own? Does that give you your character and individualism you need to grow? In a nutshell, the mature character is preaching to his younger self. What would it feel like waking up say hundreds of years later in the world and trying to exist? It’s almost an even comparison I think?

That idea came from a Woody Allen film from 1973 called Sleeper. We thought originally that the song might have been recorded in a fairly basic form until it started to take on a life of its own in the studio with a sitar, Moog synths, aboriginal instruments and a plethora of percussion.  That’s my favourite part of the recording process.  You’re not sure where it’s headed but it’s pulling you in a direction that you just go with.

Craig Rewbury: I think you always circle back to your roots of influences when you mature since they are the ones that got your blood moving and your heart racing for the first time.  I grew up in a family where my parents were only 16 and 18 years older than myself so they were discovering themselves as well.  The stereo was on 24 hours a day in our house.  The dial for the radio was set to Q107 and the turntable spun a lot of 70’s rock records.  I was listening to a lot of Zeppelin, The Who, Genesis, Pink Floyd, The Beatles, Queen, Bowie, Peter Gabriel, Steely Dan back then solely because that’s what my parents were listening to.  I really loved that stuff back then and still do today.  I broke away from that genre in high school trying to discover and experiment with newer bands with my friends. I discovered CFNY and then started digging bands like The Smiths, The Cure, REM, Blue Peter, Chalk Circle, XTC, Killing Joke, Elvis Costello, U2,The Clash, The English Beat, The Jam, Stone Roses, Housemartins, and Squeeze etc.

In the 90’s I started listening to a lot of artists I was opening for at the time which was typically Canadian. 54-40, Tea Party, Crash Test Dummies, Northern Pikes, Leslie Spit Trio, The Odds, The Pursuit of Happiness etc. Martin Streek’s Thursday 30 played a pivotal role in me discovering new music and what an era that was. I was tired of the old rock of the 70’s because of terrestrial radio shoving it down our throats.  I want to hear deep tracks and something fresh. The 90’s brought probably my favourite era in music with a shit ton of amazing bands. That era introduced me to The Catherine Wheel, Jeff Buckley, Radiohead, Teenage Fanclub, Dinosaur Jr and the list goes on and on. I was a fan of all of these artists for a reason.  They all made me feel that thing in the pit of my stomach just like those first records at my parents’ house growing up.

That said, I think all of those artists and eras were essential to me to broaden my horizons and understand music better. You eventually circle back to your roots because you realize how good that stuff really is. Good is good and timeless.

FTS: Imagine you were selling out stadiums – what would you put on your rider?

Craig Rewbury: I’m a minimalist in that respect these days. If you were to ask me that question when I was 20 I would have said limos, unlimited booze, a puppy and wax lips but now I require nothing lol.  Ok maybe some sushi or Thai food and a  decent bottle of red zin with a comfortable chair to consume it all on.

FTS: If you could play a show with three other bands (with you headlining, of course), who would you love to play with?

Craig Rewbury: Neil Young with Crazy Horse, Ryan Adams and some form of Neil Finn whether it’s with Crowded House, solo or with Fleetwood Mac.  With that line-up, the body of work would blow my mind every night and I could watch and drink that wine on my comfy chair side stage

Check out The Cabaret Quicksand’s latest single, “All You Ever Wanted to Know (Sleeper 1973)”!