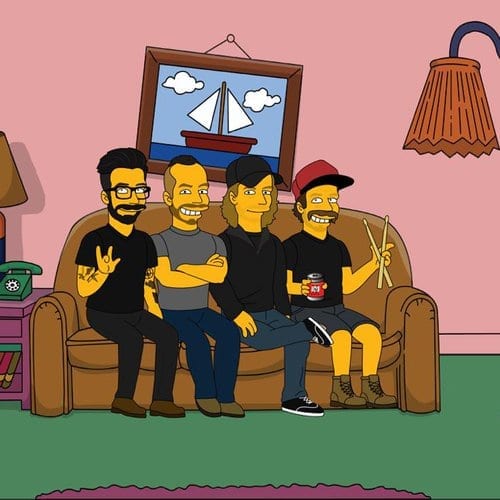 Here at FTS, we speak fluent Simpsons. It’s entirely possible that this site wouldn’t exist otherwise, because how would we communicate? And why did I have the bowl, Bart?

And so, when the latest song from Canadian all-Simpsons band The Be Sharps passed my way, my heart was embiggened, and I had to share it with you all. We caught up with the band’s singer and guitarist Adam Carter to chat about everything from Chimpan-A to Chimpan-Z.
It’s a perfectly cromulent interview.

From The Strait: How did the The Be Sharps get started?

Adam Carter: The Be Sharps got started a few years back after we found our bassist on the men’s room floor. The band was a bit of a joke to begin with, but people keep coming to shows, so we’ll keep playing them.

FTS: If Kirk Van Houten were to hear your cover of his song, “Can  Borrow A Feeling?”, what do you think his reaction would be? And as a follow up question, do you sleep in a racing car?

Adam Carter: I think dear old Kirk would complain that he’s not seeing any royalties, then maybe ask if we could give him a lift home. We’ve tried to do him justice here as best we can, as his anguish is very near and dear to our hearts.

And yes, we all sleep in racing cars. Don’t you?

FTS: Would you recognize dignity if someone drew it for you?

FTS: I was originally going to make this entire Q&A just random Simpsons quotes, but I sometimes forget that not everyone in the world speaks Simpsons (& they probably work for Allied Biscuit). So, instead, here’s a hard question – what are the top Simpsons quotes you reference most? Take your time, I’ll wait.

Adam Carter: Oh hell, that’s a difficult question. I say “yoink” pretty much every time I pick something up, and “who shot who in the whatnow?” is shorthand whenever I don’t understand something in a conversation.
“This is going to get worse before it gets better” is definitely up there too, even when my tie isn’t caught in a hot dog roller.

FTS: What future Simpsons songs can we look forward to hearing from you guys?

Adam Carter: We have a fairly wide repertoire at this point, so anything from Dr. Zaius to Kamp Krusty is on the table. Drop us a line if there’s something specific you’d like to hear!

Check out The Be Sharps’ cover of Kirk Van Houten’s “Can I Borrow A Feeling?”