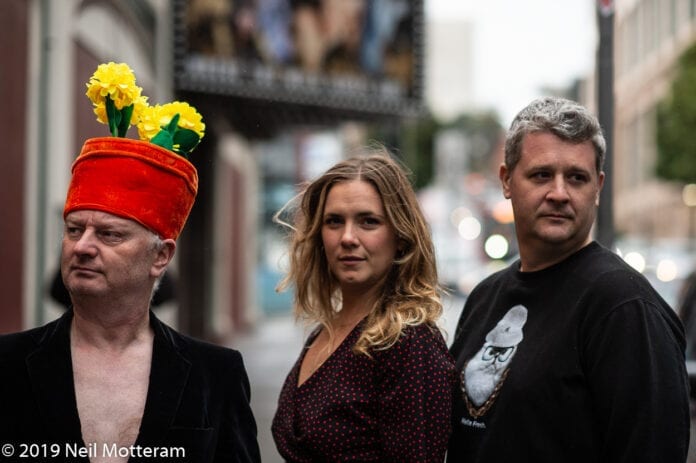 San Francisco-based trio Katfish is not your average band – they’re known for covering songs and putting their own unmistakable spin on it, and for bucking the typical band processes. With the release of their latest single, a cover of Bill Withers’ “Use Me”, we caught up with Fish, Katmeho, & Katya to find out what being an “antiband” is, and to learn more about the new song and their biggest musical influences.

From The Strait: You consider yourselves an “antiband” – what does that mean to you?

Katmeho: We’ve done all the “music biz” crap. Fish was super successful at it. I was not, but still did it. He was signed, I worked for a major label. Blah blah blah.

Its all exhausting and has nothing to do with actual MUSIC! So we are done with all that. We are done with studios saying we have to use ProTools, done withproducers who demand that our friends come in to record the “claps” on a track, done with having to use this pedal or this compressor or all that shit. We know what we like, we know how to make it and make it sound the way we want it to…and we know how to have fun onstage and put on a good show. We also know that for the majority of people in music, or in bands or at live venues, this is their livelihood…so we want to buy into that, to support them in those lines of work.

We put the fun and the investment into the local music and venue community as the top priorities. We will never get spun nationally or have a PR team or any of that nonsense. But that doesn’t mean we just want to take over an open mic night. Watch us fly to Japan for a gig…cause we can and it would be fun. Share some music, party, support a new music scene. If we can get some fans who like our sound to come to a venue and buy out the bar, support the headliners and somehow make it on your early morning flight home after a killer night out, that’s a win. Thats very Katfish.

FTS: Tell us about the new single “Use Me” – what was the inspiration to
cover it, the recording process, anything at all!

FISH: We are drunk most of the time so the actual process, if any, is hard to
describe and even harder to relate. Usually Kat proposes a song and Fish is like “no way that is bullshit we can’t do that” and then the gin hits and we start futzing with the main themes and somehow a cover version happens. In this particular case I think Kat fed the chord progression through every instrument plugin he could find and showed up with a glorious cacophony. Then Fish tried and failed to come up with a bass line, but then had another G&T and the end of the world bass line came out of his backside.

Katmeho: I’m actually a huge Bill Withers fan and an even bigger fan of his band. James Gadson was the naz. Their story was epic. I wanted to do another “groove” song with the band and this came to mind. Initially, I thought we would do a slow moody version, try to get into something brooding. But it just wasn’t right. I think Katya said, “why so slow? Jack that up” and we did a tempo change and that brought all the things together. We were working on this track before Bill passed.

Katya: Like Katmeho, I love Bill Withers and “Use Me” is just the most savage song. It felt on-brand.

FISH: I started listening to music in the mid-70s and was fortunate enough to have older neighbours who lent music around. So I grew up with Genesis, Yes, ELO, Floyd, all that, and thought they were all similar (hey, I was young). Then they lent me Ricochet by Tangerine Dream and my entire world turned on its head. From there it was Kraftwerk, OMD, Thomas Dolby, Visage, Ultravox, Human League, Tears for Fears, all that. I wouldn’t listen to guitars for another 25 years, and still regard guitars as a middling source of heat during the winter.

Katmeho: I grew up on Too $hort, Waylon Jennings, Mac Dre, Dolly Parton and Afrika Bambaataa. Seriously. I was lucky enough to be able to listen to KALX, KPOO, KUSF growing up along with whatever records my parents had around. So I was all over the place. But I heard “How Soon is Now” by The Smiths and was floored by Johnnys tremolo guitar sound. I had to ask the kid in Jazz band what that was. He took me to Guitar Center to show me and that spawned a deep love of British music that runs from Radiohead to Leftfield to Anna Calvi to Pulp to New Order. The perfect song is just an acoustic guitar and a TR808. These days I’m mostly into soul, funk, rap and vocalists that jump out…so Jeff Buckley, Al Green, Isaac Hayes. I have been listening to Willie Nelson, Eddie Hazel and UNKLE a lot since lock down.

Katya: My dad raised me primarily on the Beatles, classic rock, and 70s funk/soul. In my pre-teens I was all about Britney. Now, I still love pop and classic rock, but mostly vibe with R&B and contemporary soul/disco — H.E.R., Jessie Ware, Nao, and Sade are my always-on ladies.

FTS: Describe Katfish in one sentence.

Katya: Sake-fueled and and just barely under control

Check out the latest single from Katfish, a cover of Bill Withers’ “Use Me”!