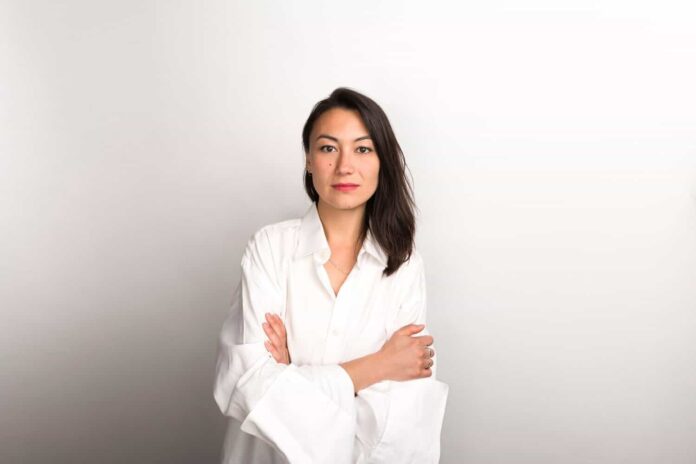 Sheenah Ko is making a name for herself, beyond being a member of Besnard Lakes. With her solo project, she marries a sophisticated synth-pop sound with visual artistry, creating something that is unmistakably her own.

We caught up with Sheenah to chat about her new single “Wrap Me Up”, her inspiration, and dream collaborations.

From The Strait: Tell us about your brand new single “Wrap Me Up,” and the video/short film that accompanies it.

Sheenah Ko: Wrap Me Up is the first single off of my new album, Nowhere In Time, which I will be releasing early 2020.  It is accompanied with a really ambitious short film/dance production that was in development for almost 2 years with my live show partner, dancer & choreographer Brittney Canda, and director Vincent René-Lortie with his company, Telescope Films.

The song was born out of a time when I was spending a few years in and out of various therapy and self-help groups such as Al-Anon and the video coincidentally takes place at a type of self-help group with this weird guru lady played by me, and shows a group’s process with dealing with their pain to finally reaching a place of acceptance and love. The short film was written as a hyperbolic and fantasized rendition of mine and Brittney’s live performance, where Brittney usually starts out in the audience and, while I begin singing, almost becomes possessed by my voice and begins moving around the audience.  The short film manages to blend seamlessly the genres of music video, dance film and narrative story telling, and the diverse team, both in cast and creators, has resulted in a powerful work that doesn’t fit into one particular genre.

FTS: What is your biggest inspiration as an artist, and what inspired you to start creating?

Sheenah: Creating music is necessary for my mental well-being/happiness.  I grew up improvising piano and singing for hours and as long as there is a piano or keyboard around, I will play it.  Playing music is a form of release; it enables me to express whatever feelings I am experiencing and is also a way to work through harder times when they happen.  I feel very fortunate as an artist that I have a way to express tougher feelings like pain, anger, sadness; it is a very healthy outlet. In terms of inspiration, I get super inspired by all forms of art, including dance, visual, photographic, film, and I enjoy diving into what other people are expressing and sharing in their art.  The more genuine and deep, the more interesting and inspiring.

Sheenah: I’d be an actress.  I actually started dabbling in the film world this past year after I was recruited to play a musician in a movie, my first “role,” and as a result, got an agent and started getting gigs/auditions.  I find the film world fascinating and it is inspiring me to study more about the art of filmmaking and acting. I am starting to develop short films with some filmmaker friends just to dabble with story making and playing my dream roles (the less-glamorous and more crazy/strange/funny characters).

FTS: What other artist would you like to collaborate with?

Sheenah: It would be a dream to collaborate with a producer like Thom Yorke or Trent Reznor, two male artists I was heavily influenced by musically growing up, and I’ve always enjoyed collaborating with male musicians because it’s a nice blend of masculine/feminine energy, vocals and sounds.  And in terms of having a dream mentor, it would be amazing women like PJ Harvey, Tori Amos, or Sarah McLachlan, super strong women who I greatly look up to.

Check out Sheenah Ko’s new single, “Wrap Me Up”!