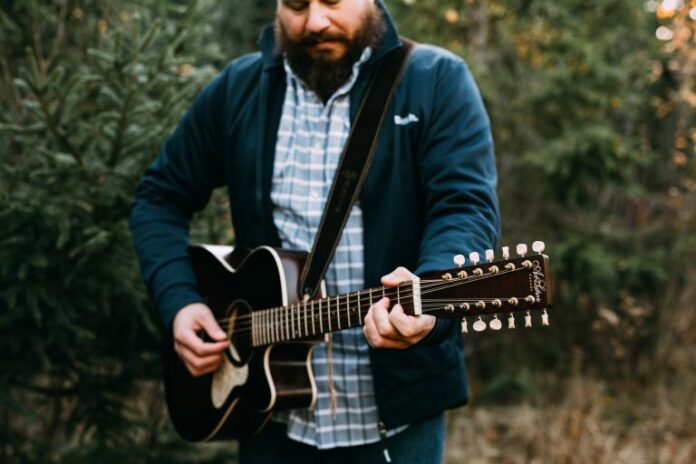 For the past two years, Niagara artist Ryan Thomas Smelle has been posting live videos every week for his Songbird Sessions On Sundays series. As a support to his 2022 album In The Homestretch, he has just released a full album featuring some of these live songs; Songbird Sessions – Volume I is now available on Bandcamp, and will be available as an audio-visual album on January 31st. The first single from this project is “Shame Shame”, which was also a fan favourite from his previous album. We caught up with Ryan to chat about the single, the new album, and his favourite songs to play live.

From The Strait: Tell us about the new single, “Shame Shame”.

Ryan Thomas Smelle: It’s exhausting to see how everyone seems close minded to others’ own religious beliefs.  It’s a little bit of a rant to practice what you preach. It’s OK to have a difference of opinion and still be respectful and kind.

FTS: This is the first single from your live album, Songbird Sessions – Volume I. How did you get started with your weekly Songbird Sessions, and what made you want to create this style of audio-visual album?

Ryan Thomas Smelle: Songbird Sessions On Sundays (SSOS) was an idea I had to push myself to become more familiar with recording as I was a newbie to it, having built my own studio during the pandemic.

The rules are simple, I give myself one hour to record, mix and edit the video.  This often leads to it being done in one take, off the floor and very raw with imperfections.  This can be my own take on a cover tune or an original I was working on.  I’m coming up on 2 years (104 videos), so lots of videos to choose from of all genres.

The idea of making a live album occurred when all of sudden I had 8 originals that lended nicely as support to my ‘In The Homestretch’ album with 5 songs being alternate versions.  I spent some time mastering each track but stuck to the rule of not adding anything new to the track that wasn’t there from the original session.

The audio-visual album was just the next extension and links all the videos together in one large format. I added the lyrics to each and this pays homage to following the bouncing ball sing along kids videos from back in the day.

*The Audio-Visual Album Release will be January 31st on YouTube and clocks in at just over 20 minutes.

FTS: What is your favourite song to play live? For fun, let’s say one of your originals, and one cover.

This song has been around for quite some time and people in the audience seem to sing along even without ever hearing it before.  Definitely an upcoming single as I’m currently recording it with Paul Gigliotti in his studio.

Covers:  I currently have 4 and they switch all the time.  These ones seem to garner the best crowd response and surprise.

my version is down a few keys with a finger slap rhythm. It always turns heads.

I’ve been told for years I sound like Brad Roberts so I thought I’d learn this one and yep I do.

brilliantly crafted song that has 3 keys. Tough to pull off on an acoustic, but is so fun and challenging to play and sing.

George Ezra – Blame It On Me

another singer I sound like, and this song is always enjoyable to belt out.

FTS: Your name comes up often among Niagara musicians, referencing how hard you hustle, playing more shows than most musicians could fathom. How do you keep up the energy to play so often, on top of your day job? (Please give us tips, we’re tired just thinking about it!)

Ryan Thomas Smelle: In all honesty, things have snowballed quite quickly over the past 2 years.

Due to the pandemic and my daughter being immuno-compromised, my wife had to take a leave from work. As mentioned previously, this reignited my music career (after a lengthy hiatus) by filling a need to make some extra cash.

Now, there is quite a bit of demand for my talents around the Niagara Region and gigs come relatively easy.  I also have created little pockets of fans that frequently come out to my gigs (Crystal Beach, NOTL). This incentive makes each show exciting and highly motivating knowing that people will be there to see you.

The other way I look at it is I would probably be sitting at home playing anyways, so why not in front of people.

Tips: Be open minded and push yourself outside of your comfort box when playing and try new things.  I mash up songs frequently and know close to a 1,000 cover tunes.  I try to never play a song I played at the previous show.  It’s a fun game.

Lastly, I have some talented supporting musicians who come in on the fly and offer their own take on the tunes I’m playing which makes for an always interesting live performance.

Ryan Thomas Smelle: I have set a few goals for my original music in 2023 and hope to release a high quality professional music video, play some summer festivals and record with some new people.  As far as cover gigs, the calendar is pretty full already.