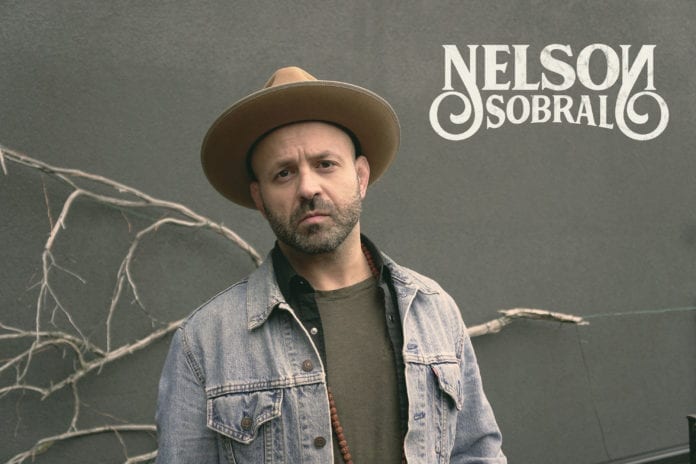 A friend and FTS favourite, Nelson Sobral just released his latest single, “Yours & Mine”. You may remember it from a “Live From The Strait” he did with us last year, when he gave us a sneak peek of the unreleased track. Now it’s out, and it’s fantastic – so we had a little chat with our talented pal about the new music, his tips for other artists, and… Rocky III vs IV, obviously.

From The Strait: Tell us about your new single, “Yours & Mine” – inspiration, writing process, recording experience, anything!

Nelson Sobral: The song is called “Yours & Mine” and it’s a song about loving someone regardless of their faults especially since we all have ‘em!

I wrote this one about a year or so ago and it was always kicking around and getting beaten into shape the more I played it out and about until I settled on the version that you’ll hear soon.

I originally tracked the whole song (drums, guitar, bass & vocals – with Rafael Rodriguez on drums) over at Story Arts Centre with Mike Langford engineering/producing. Unfortunately the track proved to be unusable, not because of anything Mike or Rafael did or didn’t do but because I had recorded it in the wrong key! I realized after letting the recording sit for a few months that pitching it up would benefit my voice and the track so I set about re-recording all the guitars, bass & vocals at my home studio “Bowery Sound” with Mattie Leon helping to engineer & produce and he also recorded a sweet organ track that sits just right in the song…we were fortunate to not have to re-do Rafael Rodriguez’s swaggering, soulful drum track!

My favourite recordings have little pieces of “ear candy” throughout so that every time you come back to it you notice a little something you didn’t before. I think this track has that and I also think its a natural evolution in my sound, this swirling mess of rock&roll, blues, country, pop, r&b and whatever else gets filtered through my head and my heart.

FTS: You’re one of the hardest working musicians we know (and we know many!) – what tips do you have for other musicians when it comes to hustling?

Nelson: The short answer is to do what you love.The longer answer is I love music and everything that’s involved with it writing, recording, performing so it makes it “easier” there are ups and downs as with anything in life but i am constantly aware of how lucky i am to put food on the table and a roof over my head by doing what i love and what I’ve wanted to do since i was a child. Being eternally grateful for that makes the hustling really easy.

FTS: You’ve been a friend and bandmate of Mattie Leon‘s for a long time. What was it like to have him produce your music? (And feel free to be brutally honest, it’s about time someone outed Mattie as the secretly evil dude he must be. No one is that much of a great guy! We want the skeletons in that organized closet.)

Nelson: I am a constant checker of people in that I like to vet them and push their buttons to see where their boundaries lie. I like to know who will be there when the chips are down and who is just an acquaintance. Theres nothing wrong with acquaintances but if I’m going to invest time and energy into being friends with someone I like to know where i stand in the grand scheme of things. All this to say, I’m sorry to disappoint but Mattie is that great of a guy and not just him but everybody in the Leon clan and everyone in their world are just good people.

Musically, I have a lot of respect for him and I believe its mutual. We balance each other out and most importantly I trust him and his instincts so if he wants to try something out I know it’s not a waste of time, which is important so as to not add strain to the recording process. Pressure doesn’t always produce diamonds.

FTS: (We’re just kidding Mattie, we love ya!) But speaking of great musicians, who are a few up & coming artists that we should be listening to?

Nelson: There’s a lot of friends and contemporaries in the scene and a lot of up & comers that come to the weekly open mic i host… too many to mention plus… I though we were talking about me!!! hahahaha

FTS: In one of our first “This or That” interviews, you and our own Nolan Jodes had words over a debate about Rocky III and Rocky IV – it got pretty heated. He wants to know, have you had time to change you mind and come to your senses yet, that Rocky IV is clearly superior?

Nelson: You tell Nolan Jodes that I’m always down for a good fight. That being said I’m a huge Rocky 4 fan but I like the grittiness of Rocky 3 and how he had to get back the Eye of The Tiger, I love a good resurrection story! Although to be fair all the Rocky movies are about that. In closing… the song from Rocky 3 beats Rocky 4… “Eye of The Tiger” by Survivor trumps any argument Nolan Jodes has.

Check out Nelson Sobral’s latest single, “Yours & Mine”!