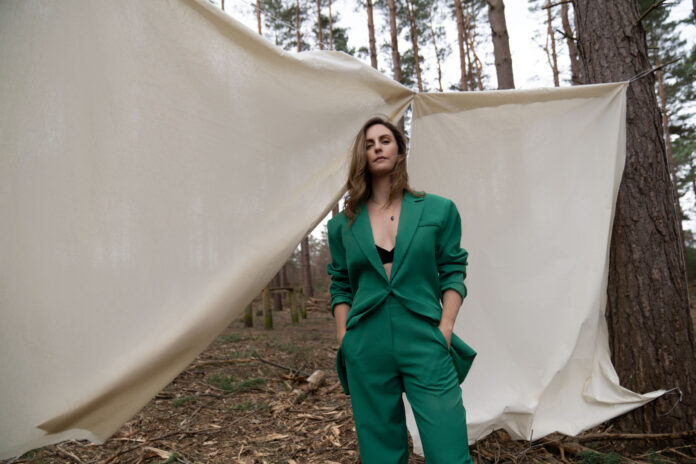 London & New York-based multi-instrumentalist and singer ICEBERG has just released the debut single from her upcoming self-produced EP, Swim. The new single is a dreamy indie rock song, with gorgeous stand-out vocals and an ethereal vibe. We caught up with ICEBERG to chat about the new single, her deserted island album picks, and her production company that was created to help female, gay and trans artists release their music.

From The Strait: Tell us about the new single, “Swim”.

ICEBERG: Swim is the first single off my 7 song self-produced EP also called Swim. I received an arts grant last August from the UK government to create the project, so I spent January through April writing, producing and retracking the EP. I went into the studio with my good friend and co producer Oscar Moos in April/May to retrack the songs and do final production. A lot of the EP is about my love affair with music and my life as a producer in London. Swim in particular is about the desire to arrive at the thing I’ve been chasing for 8 years. I recently posted this about Swim…

“Swim… late one night after coming back from a 12 hour day in a studio in London, I sat in my living room with a glass of cheap red wine thinking about the artists I’d just recorded. It was past midnight and I was so spent I was seeing spots, but I got that familiar itch to write that often comes after working with other artists. I love writing, and the itch comes sporadically and without warning, always without intention. it just shows up like a neighbor with my mail. Sometimes unwanted when I’d worked a long day. more music? my brain and ears would say. sometimes i ignored it knowing that if i started i had to finish. but today the feeling was really strong, so i stood up from the couch and grabbed my blue fender off the wall.

I’d recently fallen in love with drop D tuning. I messed around until I found a few chords I loved. Then Swim just poured out of me. like it had been waiting to come out for a while. an overwhelming desire to arrive at the thing i’d been chasing for 8 years before it was too late. like an unquenchable thirst. I got this idea that a pool is like a stage. they create the same sensations. pressure, lack of air, they both make my eyes sting. they’re dangerous if you lose focus and they require submersion to work.

Swim is about the double standards placed on women, and more about society’s obsession with youth. My love affair with music started when I was 4, singing loudly to Annie in the car, and it has become, in recent years, just about the only thing I care about. nearly the only thing i think about. My guess is many people feel this way about something. they’d give everything to swim. for better or for worse the thirst keeps getting stronger. thanks for reading.”

FTS: As a multi-instrumentalist, which instrument speaks to you most? (Or is your favourite to play?)

ICEBERG: I’ve been playing piano since I was eight, so piano is the instrument that feels as easy to play as frying eggs. I taught myself to play acoustic guitar at 20 and electric at 26. I’ve played a LOT of guitar in the past six years, partly to improve but mostly because I love the sound. I write on both but I get very different results. Swim was written on guitar while “I Can’t Forgive Me” and “Blood Bank”, both out in the next 7 weeks, were written on piano. Piano is magical and intimate and nostalgic, but the sound of a fender guitar through a Twin amp with lush reverb and delay on it is, for me, electrifying. It touches my soul and makes me feel immediately emotional.

FTS: You opened Glassnote Productions to help female, gay and trans artists release their music – tell us about that.

ICEBERG: I lived in Nashville for 4 years and wrote and recorded two albums while I was there. I also played nearly a thousand shows as an independent artist, booking and promoting everything myself.  Nashville is a great place to witness incredible songwriting and guitar playing , but it’s sexist. Deeply sexist. I’m not interested in rehashing the daily belittment I experienced, but when I went into studios I felt that I wasn’t always heard and, in the end, the music I put out wasn’t a true representation of me as an artist. It was frustrating because I spent so much time writing the music and perfecting every line. I wanted more control over my own sound, so after four years in Nashville I decided to move to London to go back to school for music production/engineering. I packed up my things and flew to London with my cat where my sister and aunt live. I knew I’d at least have a place to crash. I hadn’t enrolled yet when I arrived, so I rushed the paperwork and a week later I was accepted to BIMM. I followed the degree with an intense year-long internship where I got to watch experienced producers work with artists on everything from songwriting to final mix tweaks. I wanted to open a production house myself. I was already producing artists including this wonderful band called Westfoord, a gay and transgender band. They’re wicked good singers and songwriters and they’re only 19. I’d worked with a lot of artists at this point but working with them was the most satisfying. I reflected on why and realized that I was producing for artists who might otherwise not be heard in the studio. I’m so careful to not override an artist’s vision. I might disagree sometimes and I’m not afraid to say so, but if an artist feels that they must have a fifth chorus or 50 harmonies, hey, it’s your art so your call. Taking these unique things away makes an artist more generic. In my opinion, these eccentricities are the artist. It’s what makes them them. This was at the start of Glassnote Productions so this became the obvious motto or mission of the company. Work with and listen to artists who might otherwise be told to sit on the couch and watch while some old guy with long hair completely changes their song.

ICEBERG: I would take Bon Iver’s For Emma, Forever Ago, Missy Higgins’ On a Clear Night, Black Pumas, the self-titled album, Phoebe Bridgers Stranger in the Alps, and anything by Khruangbim. I love clever songwriting, atmospheric guitars, and soul grooves.

FTS: What’s coming up next for you?

ICEBERG: I’m releasing 6 songs, 4 music videos and 6 live studio sessions with a cellist over the next 6 months. Then, I’m opening for some bigger artists at the end of 2022 and touring in 2023. Dates haven’t been announced so I can’t say who or when but it will be the high point of my career so far. I can’t wait.

Check out “Swim”, the latest single from ICEBERG!