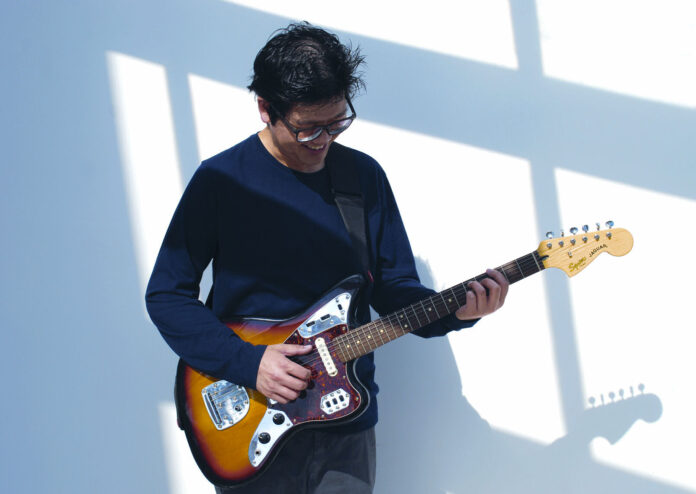 Toronto musician Justin Chee was a solo artist who went on hiatus to focus on his career – but when the pandemic hit, he returned to music, this time with his project Ordinary // Colours. He’s just released his first single, “Pacific Division”, an indie folk-rock gem with poppy brightness, featuring synth bass, MIDI drums and glockenspiel melodies. We caught up with Justin to chat about the song, what made him switch solo projects, and the Canadian bands he’s listening to lately.

From the Strait: Tell us about the new single, “Pacific Division”.

Ordinary // Colours:The song comes from a demo where I improvised a bunch of guitar chords and glockenspiel melodies on top of a drum loop. For the lyrics, they began from singing stream-of-consciously while imagining the story of someone leaving their hometown to escape a bunch of problems and seek out new opportunities in another city. However, when they actually get there, they receive a harsh blow of reality and end up falling back into a similar situation, coping instead via a cycle of endless consumption and consumerism. At least for the theme of “seeking new opportunities”, I drew from some parallels in my own life, as I earlier considered moving to California in search of those opportunities. Though I ended up staying in Canada, the thoughts I had about the difficulties of relocation became one of the sources of inspiration for the song. In terms of musical accompaniment, I wanted to make it more upbeat and pretty sounding because I felt it would be a good contrast that could play out well against the lyrical themes.

FTS: You were previously releasing solo material under your name – what made you switch to this project, and the name Ordinary // Colours?

Ordinary // Colours: I think that when you release music under your own name, it can sometimes lead people to make the mistake of conflating every idea expressed in the lyrics to the artist’s personal experiences, which is not necessarily the case all the time. I felt that having a different moniker could afford me the distance and ability to tell stories from perspectives other than mine because it is a more interesting challenge to write that way. Musically, it also signifies a greater expansion in the sounds that I wanted to express. When I first started off, I was still in the middle of finding my comfort zone in terms of writing, as well as learning how to engineer, record and mix. As a result, though I imagined the songs to be much fuller within my head, my first set of material was much more barebones and less technically adept than intended. With Ordinary // Colours, I went into the project thinking that I wanted to realize the songs to their full potential without any restrictions and also not think about how to replicate them perfectly within a live setting. As for the name itself, it was actually my significant other’s idea for a website she planned to build which ultimately didn’t come to fruition. When I asked her for a name suggestion, she provided that one and ultimately lent it to me, so one day I might need to give it back!

FTS: What are some Canadian bands or artists you’re listening to lately?

Ordinary // Colours: Luna Li’s new record has been on heavy rotation lately. I recently discovered Poolblood, so I’ve been enjoying their latest single, “Twinkie”. They sound kinda like Alvvays, whose new record I’m also looking forward to hearing when it comes out. And I fall back frequently on Broken Social Scene and Owen Pallett within my playlists. I realize this ended up being a very Toronto-centric answer, so I’ll also give Montreal an honourable mention in that I went on a very heavy Godspeed You! Black Emperor kick last year with their last few records, as they sounded very appropriate for the situation at that time.

Ordinary // Colours: When I first encountered them as a teenager, I was enamoured with Radiohead because I loved all the strange sounds that Jonny Greenwood and Ed O’Brien were creating, so they really started me off on a path of further musical discovery. In university, I really got into My Bloody Valentine because Kevin Shields’ sound felt so visceral, yet at the same time, beneath all the layers of distortion and reverb, it was also very harmonious and beautiful. Even though I took piano lessons for about ten years, I found myself connecting to the guitar much more because of the physicality involved in playing it and MBV definitely contributed to that way of thinking. Shugo Tokumaru’s first two records (“Night Piece” and “L.S.T.”) and Sufjan Stevens’ “Michigan” record are important to me because they demonstrate that even with very few instruments, arrangement and composition are the most important factors in terms of writing a good song. They also gave me the confidence to believe that you don’t necessarily need to go into a studio to record because you can learn how to do it yourself at home, with whatever tools are available to you.

Ordinary // Colours:  Whenever I feel challenged, I jot down or record the idea as is and then leave it for a few days so it can stew in my subconscious for a bit. I find that if I force myself to write, more often than not, it doesn’t end up being very good and I end up scrapping and restarting anyways. I also make a habit of trying to write down lyric ideas in a journal or recording / videotaping any riffs and melodies on my phone as soon as inspiration hits, so that as much of the original essence is captured as possible. It ends up becoming a useful repository of ideas I can turn to if I’m truly stuck. Working on another song can also be a good distraction and sometimes, the inspiration from that cross-pollinates with those ideas that are still stewing in the back of my brain.

Check out “Pacific Division”, the new single from Ordinary // Colours!