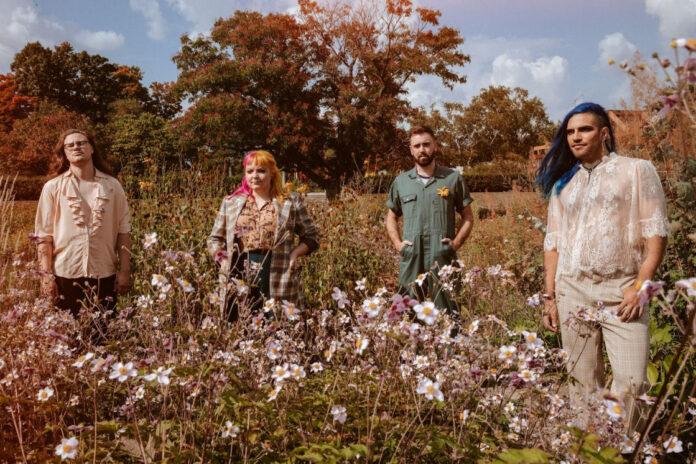 Hamilton-based indie band Basement Revolver have just released their latest single, “Dissolve”, the shoegazey focus track from their new album Embody. We caught up with them to chat about the song, how they became a band, and the weirdest show they’ve ever played.

From the Strait: Tell us about the new song, “Dissolve”.

Basement Revolver: Dissolve is a song about my partner and I starting our lives together. Through vulnerability and doing live together, through seeing each other at our worst, we continue to grow closer. The pandemic has only amplified this. We continue on with the merging of our lives, like sugar into a good cup of Earl Grey. It is about the feeling of no longer knowing where I end and my partner begins.

FTS:  With the release of your second LP, Embody, how would you say that your sound has evolved since the first record?

Basement Revolver: I don’t know if maturity is the right word, but we have definitely finessed. I feel like we stopped caring about trying to sound like anything in particular and just let the songs have their own life and personality. I think that is where the best songs come from. I have always been a pretty open book about the life behind the songs, but I think the pandemic gave me so much more time to explore and work on myself and I hope that it comes through in the music.

FTS: How did Basement Revolver get together?

Basement Revolver: Back in the day, it was just Nim and I. We started it as a fun little project, I wanted to experiment with some vocal effects and was learning how to play electric. Brandon joined the band, we recorded and did our first little baby tour, and it grew from there! Jon hopped on after the release of Heavy Eyes, and really influenced our sound in the best way. Brandon left the band at the start of the pandemic and Levi hopped on to fill in. We recorded ‘Embody”, and here we are! I still can’t believe that we started in 2015.

Basement Revolver: I have been over-listening to Valentine by Snail Mail. Lindsay just has some lines in there that truly stuck and resonated with me – in particular when she sings “I’ve got the devil in me” over and over, it’s just so badass and so relatable.

Basement Revolver: We have played many many shows over the years, but recently, my favorite would have to be a little DIY ish show we played behind the Casbah in Hamilton – in the parking lot last summer. It just felt so good to play music for human beings again. Truly, it felt like a drug, and I cannot wait for more. The weirdest show would have to be at the start of the pandemic when we played a drive-in show. Playing to a bunch of cars is weird as fuck. I honestly hope that I never have to do that again.
—-

Check out “Dissolve”, the latest single from Basement Revolver!