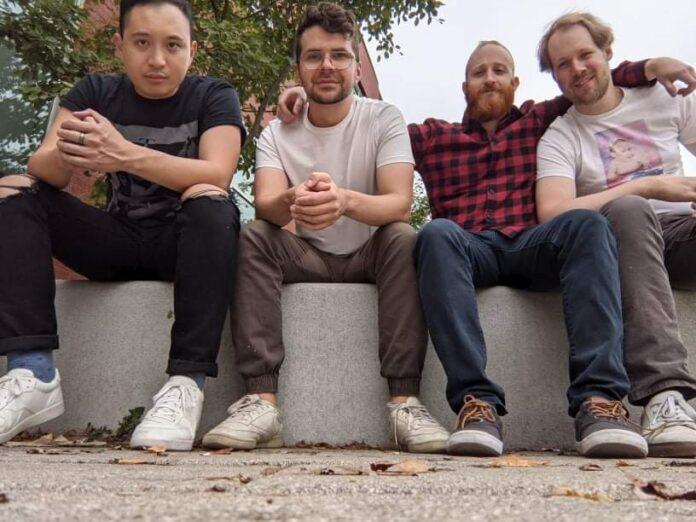 Though they may have started out playing At The Drive-In covers, alt-rockers Horse Doctor soon realized that the band members’ chemistry and collective musical strengths created something unique. The new single, “Sinking”, is their “Soundgarden meets frantic Fall of Troy guitars mashup” – we caught up with the band members to discuss the song, bands they dig, and the best and worst parts of being in a band.

From The Strait: Tell us about the new single, “Sinking”.

Binh: Sinking was written in two sessions that tapped into our common vein of angst, coming out in dissonance and hard hits that try to capture the feeling of giving in to your own toxicity.

Jake: We were doing a one-new-song-per-practice experiment – a pretty productive songwriting period for us that was sandwiched between two hiatuses (hiatae? hiates?). You hear about songs that “write themselves”, but none of us really remember the songwriting process because it just kind of happened, and that was that. The lyrics were a collaborative effort.

Liam: I don’t remember writing this song at all. I just remember Jake telling me just to do chromatic descent, which I resisted at first, then gave in to.

Arsenii: Like Jake said, it came out of a time where we were trying to write music as quickly as possible. That’s something that works for us, because we’re all pretty persnickety people in general who get overly caught up in details – especially me. So having the time pressure of working quickly helped us to keep things moving along.

FTS: Pretty safe to say that you’re all fans of At The Drive-In, since you started out playing ATDI covers. What are some other bands that are high on your list?

Jake: That would be a pretty long list because we’re all into different bands. I would say for this current song, Chris Cornell/Soundgarden was a big influence for the chord progressions and melodies. Cornell had a penchant for singing pretty bluesy melodies over unusually complex and jazzy chords, which altogether, somehow sounded like hard rock.

Binh: I loved The Fall of Troy and other post-hardcore bands since I was a teenager, there’s something about riffs that are all over the place but still completely obvious and driving and fun to play that I love. A lot of the riffs on this track came together very naturally in that way to me, sort of fitting in and driving forward without standing out jarringly. I’m also fascinated by and trying to capture emotions in the same way as the expressive guitarwork from Mineral and Sunny Day Real Estate.

Liam: Like Jake said, we all like pretty different things. I think we were all influenced by Radiohead, and by alt-rock radio one hit wonders. I bring a lot of noise rock and post punk to my parts for Horse Doctor. I love the bass sound in bands like Metz, KEN Mode, and Daughters, but the parts I play are often more melodic.

FTS: What’s your favourite thing about being in a band? Least favourite?

Arsenii: It would be really cool to work with Neil Young. I think he’d be really easy to work with and I just imagine it being a good time. Our music isn’t really similar but we would make something happen.

Liam: I’d like to work with Rick Rubin, maybe because I imagine him settling all our arguments in a really chill way. I’ve also been pretty obsessed with Alex G lately, he writes really weird songs that I would love to play bass on.

FTS: If you could time travel to any different time period to be a musician in, what would it be?

Jake: The future, to personally ensure rock isn’t dead. Plus, maybe playing instruments by hand would be trendy again?

Binh: We often joke that I don’t know any music from before 2000, but I think most of the music I listen to comes from the 90s, and honestly that’s just because I mostly listen to Mineral and Sunny Day Real Estate.

Check out “Sinking”, the latest single from Horse Doctor!