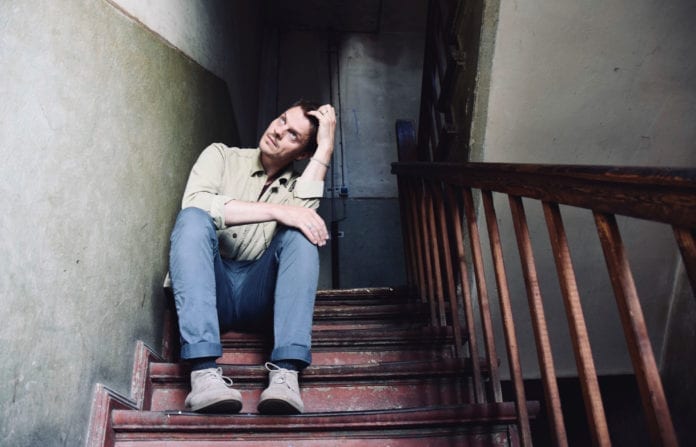 Charlie Grant is a Berlin-based singer-songwriter who got his first break as a songwriter for hire in London, after landing a publishing deal with EMI. After writing with a slew of artists, well-known and otherwise, he decided to work on his own music. He’s just released his latest single, “Stranger’s Eyes”, so we caught up with Charlie to learn more about the song, his musical influences, and his tips for new musicians.

From The Strait: Tell us about your new single “Stranger’s Eyes”.

Charlie Grant: Stranger’s Eyes was co-written with my friend Freddie Dickson who is a great artist in his own right. We recorded it with mutual friend Ivo Vollering who has a vibey home studio in Berlin, we all threw ideas at it and had loads of fun in the process, passing instruments back and forth between us and all contributing to the track with piano, guitars and percussion. I think we captured a dreamy, bleary eyed feeling that suits the song well. The song is more reflective and mellow than my last release, “Love Letters” and is inspired by someone who has become jaded and cynical too young after suffering one too many disappointments. They get a glimpse of a new beginning when they see someone in a crowded bar and catch eyes, and for a moment everything is possible again.

From The Strait: Who were your biggest musical influences growing up, and how do they differ from your current ones?

Charlie Grant: My first loves musically were the records my parents had at home, things like The Beatles, Bill Withers and Simon and Garfunkel. I later discovered Prince and The Police and went through a huge hard rock and grunge phase with bands like Van Halen, Led Zeppelin and Soundgarden but I never stopped loving melody and the power of a good hook. Elliott Smith, Beck and Oasis had a big impact on me when I first started writing songs in the 90’s. I’m currently a big fan of Andrew Bird, Foy Vance and Sam Brookes as well as Kacey Musgraves and newer pop artists like Sigrid and Maggie Rogers.

Charlie Grant: A combination of intimate, stripped down and acoustic moments and noisey and energetic full band stuff. I like to have that light and shade feeling so people can see more than one side of what I do.

From The Strait: What tips would you give new artists? Is there anything you wish you had known when you were starting out?

Charlie Grant: Collaborate with like minded souls as much as possible, you’ll make music that you wouldn’t have made on your own and will build a network at the same time. Also, being a good hang and not being egocentric will get you further in the long run than being super talented but difficult to work with or be around.  Staying true to the kind of music you love rather than chasing trends is a good strategy, you’ll get to stay in love with making music and have fun with it even through the lean times when it feels like nothing is moving forward for you. Building a small and committed audience can be enough to sustain you over time, so decide what version of success is going to suit you best.

From The Strait: Describe your sound in one sentence.

Charlie Grant: Heartfelt, handmade and soulful songs written and recorded with a deep love for the classics.