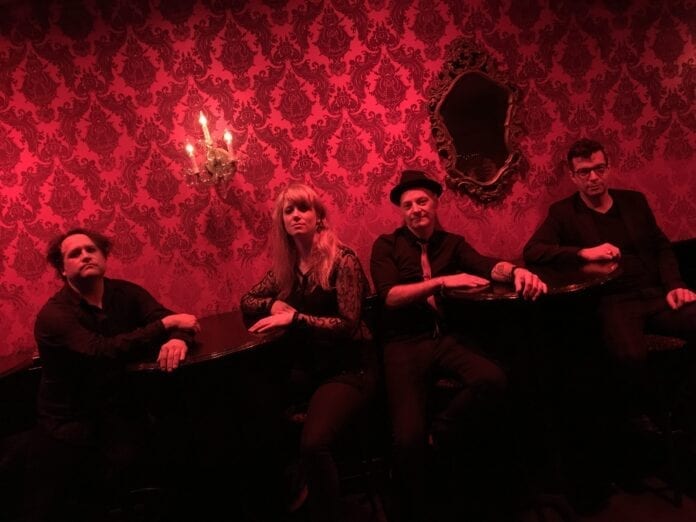 If you were planning on seeing Ron Hawkins‘ Live From The Strait show and were disappointed that we had to postpone it, here’s something to tide you over. Since he and the Do Good Assassins have been releasing new music including the lead-off single, “Teenage Insurrection”, we had a chat with Ron to learn more about his decision to go analogue, Facebook livestreaming, and his biggest musical influences.

From The Strait: Your recent single “Teenage Insurrection” is from the upcoming album 246 which was recorded on a 4 track cassette recorded. What made you want to go fully analogue with this release?

Ron Hawkins: Well it was kind of a happy accident. I was wandering around the Reverb.com site (an instrument buy and sell site on line) and saw a 1985 Tascam 246 4 track recorder. It was identical to one I had back in 1983 – one that I wrote and recorded all my first struggling songs on. It caught my eye and my imagination started humming. Add to that the fact that I had recorded and released 18 albums up to that point so a new angle or a new approach to making a record was exciting to me. Even if that “new approach” was an ancient one.

So I bought the 4track and took it to a place in Toronto called Dupe Shop, which is frequented by young super nerds enamoured with analogue. They got it tooled up and humming like brand new. From the first time I pressed record, I could smell the tape cleaner and the metal capstan and the whole sensory overload transported me back to my folks basement. That excitement and nostalgia fuelled the whole album. We recorded in Jody’s (drummer’s) living room. Stuart Cameron plays guitar in the band and Lee Rose is on bass so the band is a wonderfully soulful crew. We isolated the instruments as best we could and just let ‘er rip.

From The Strait: With all live shows on hold for months (including the one we were putting on with you, here in St. Catharines), you’ve taken to livestreaming shows online. How has that been, and will you continue after venues are open again?

Ron Hawkins: Live streaming has been a great way to keep the community I’m part of from frazzling and fraying. I dragged my feet for the first couple weeks of the pandemic because try as I might I couldn’t find a way to make it sound and look good. Facebook was built to make money, end of story. I liken it to showing up to a venue with a metal floor, mirrors all around the back of the stage and a low ceiling – the owners built it as an afterthought and the venue is a way to sell beer… with a live band hammering away in the background.

So all this is just to say Facebook wasn’t built for the audiophile music experience. That threw me for a couple weeks till I realized that’s not what it’s about at all. The pandemic made it clear that people felt secluded, separated and in need for any kind of community solidarity they could get. So I started my weekly Tommy Douglas Tuesdays. TDT because I felt blessed to be weathering a pandemic in a country with socialized medicine. It seemed fitting.

As the Tuesdays went on I leaned into the weirdness of a solo on line show – I brought in sound effects machines for applause and weird reaction noises to songs I’d play. I held up hand made cardboard signs with places people could send money to help those in need (PPE, Black Lives Matter, Shelters etc.) People had been wonderful about trying to monetize my Tuesdays in order to support me through the pandemic, but I’m a very resourceful indie dude so I was ok and I thought passing that energy and money on to those more in need was a good way to use the platform.

I tell a lot of stories and behind the scenes tales that would maybe not be as
doable in a live venue setting. The solo livestream has become so much a thing of it’s own (not like a band show or even like a live solo show) that I may continue it as a performance option even once we’re back out in the world.

FTS: And speaking of venues, where have you missed playing the most?

Ron Hawkins: I’ve never been a huge outdoor stage guy or a festival lover. I like the band members to be close by, not spread out 50 or 60 feet from me. I feel most at home either in a sweaty rock club with the band (Lee’s Palace or The Horseshoe Tavern) or even a venue the size of the TownBallroom in Buffalo (1200) or Massey Hall. As a solo performer I much prefer a very intimate room of say 50 or 80 people. It’s not a smart business move but it satisfies me artistically and emotionally. Maybe I’m just an old busker but I like to see the people and feel the filth and the fury.

FTS: Who would you say were your biggest musical influences growing up, and have they changed much over the years?

Ron Hawkins: As I get older and as I create a larger body of work I realize that it comes down to a handful of artists. The Clash is a major motivator and is the perfect mathematical formula of art and activism. They wrote aggressive and emotionally charged songs that ran the gamut from punk, ska, rockabilly, reggae, pop and even elements of hip hop. Their commitment to social justice and their no bullshit ethos always spoke to me and was the inspiration for how I’ve set up my career.

Billy Bragg is an influence for similar reasons but he also brings the romantic side to the fore. He’s a huge soul fan so the Motown and Stax influences are there. And there are a number of folk acts that inspired my lyric writing as well. But really everyone from the Beatles to Prince, Joni Mitchell, Public Enemy, Weddings Parties Anything, Gang of Four, The Jam, Royal Headache, Sleaford Mods, Toots and The Maytalls. Margaret Glaspy and on and on.

I have been equally influenced by novelists and painters as well. The list is too large to site but suffice to say my ears are always open and my mind is a bit of a sponge. I take inspiration wherever I can find it.

FTS: What are your go-to albums that you’ll never get sick of?

Ron Hawkins: If I had to choose one and one only – hands down it’s London Calling. I always hold it up as a litmus test for the perfect blend of ruff edges and sweet production. The spit is palpable and there are more than a few “mistakes” but then the beautiful horn arrangements on Revolution Rock and Rudy Can’t Fail or the layered percussion on Jimmy Jazz or Wrong ‘Em Boyo take it to a whole other level. That record is alive with a capital A. There are very few records, or works of art for that matter, that can claim this elusive title.

Check out Ron Hawkins and the Do Good Assassins’ new single, “Teenage Insurrection”!