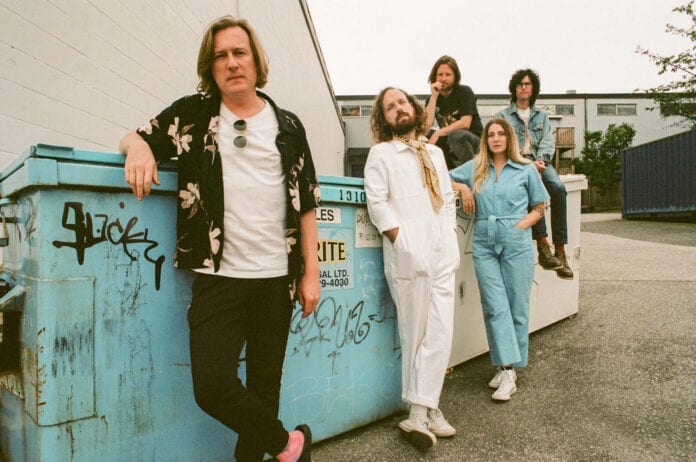 Vancouver psych-rock band Yukon Blonde are back with their first new music of the year – and this time, it’s got a retro-pop feel and a hell of a lot of groove. We caught up with the band to chat about the new tune, favourite venues, and their new adventures in taking charge of recording and producing their own music.

From The Strait: We are absolutely diggin’ the new track, “Get Precious”. Can you tell us a bit about the inspiration or process behind it?

Yukon Blonde: It sounds kind of silly now, but the real inspiration for this song sort of began as a few of us popping over to my place on one of the Gulf Islands for a hang/vacation. I don’t think any of us had any real intentions of making music, but when we were there, the vibe was correct and we just started messing around. Brandon had the riff and a chorus idea that got us started, and we just started playing around with it. I was thinking about this imaginary version of myself that didn’t let social media or manipulative behaviour get me down, nor did I take any part in it. We talked about these sorts of things and collaboratively created that person. They’re confident, creative, can see the crabs in the bucket but ultimately doesn’t really let those people in because our main character is too busy being awesome.

From The Strait: You guys are known for your killer live performances, so we’re sure you’ve been missing that a lot. What’s your all-time favourite venue to play?

Yukon Blonde: Yeah it’s a real bummer to not be playing for people, however we’ve never been given the opportunity to see whether or not we truly thrive as recording artists until now. Get Precious is entirely recorded and produced by myself and James and mixed by James. So yeah, we’d love to be playing shows almost more than anything, but we’re on a strange new adventure and it’s still exciting to be immersed in that too. Oh, and the Commodore Ballroom for sure.

Yukon Blonde: I don’t think ours is unlike many bands or artists out there: The songs usually start with me. I write the song through recording and have a pretty good idea of what I want most of it to be. About 30% of the time, the song is reworked, sometimes entirely by the band before we record it for real. There are some incredibly notable exceptions, however, as Brandon and James are phenomenal songwriters and contributed some of the best songs to our last album Critical Hit. When they present a song to the band, they typically do so the same way I do, and in some instances, nearly nothing ends up being changed from the demos.

The music we’re working on now mostly begins the same way as in the past, but since we’re recording and producing everything, the end result is much more collaborative (and less stressful!) than ever. It’s a really nice time we’re having.

FTS: Describe each band member in two words or less.

FTS: What’s next for Yukon Blonde?

Yukon Blonde: Same thing we try and do every night Pinky.

Check out the video for Yukon Blonde’s “Get Precious”!