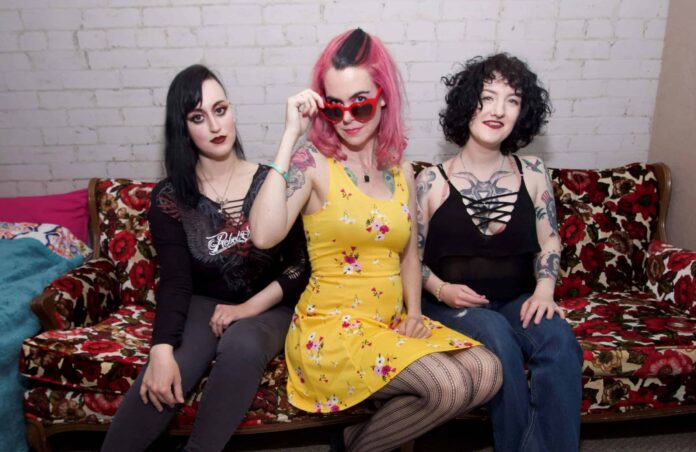 Whatzername just dropped a brand spankin’ new video for their latest single, “Vulture”– this marks the second single for the Niagara trio, and the first official video. We had a quick chat to learn more about how they got their start, the inspiration behind “Vulture”, and their musical guilty pleasures.

From The Strait: How did Whatzername get started?

Whatzername: After releasing her first solo EP, Ashlee decided to expand and create a band.

Jess approached Ashlee at a local music festival expressing interest in drumming for her and the idea started to form. Ashlee invited her friend Clairisa to join on bass and that’s how Whatzername came to be. Starting out with performing Ash’s solo stuff and some alternative/punk covers, the ladies started created their own sound and writing new material for Whatzername.

FTS: How would you describe your sound?

FTS: Where did the inspiration for “Vulture” come from? How about the video?

Whatzername: The ongoing battle of giving too much of oneself to others that take advantage, and the idea that we all have someone on our side looking out for us, perhaps someone who is jaded and has seen it all, like a vulture.

The video was filmed by Smoothie Studio (Bryce Smith) and Jeremy Sobocan. These guys had a great vision for the feeling we were trying to convey; mysterious story-telling. The idea for the video was Ashlee narrating at the piano, juxtaposed with the band performing in a bedroom. The video also includes a cameo from friend Danno O’Shea, who recorded lead guitar on the track. The unique house is artistically decorated and we thought it would serve well as a venue for the video.

FTS: What’s next for Whatzername?

FTS: If you could play any venue with any other band on the bill, where and who would you choose?

FTS: Do you have any musical guilty pleasures? (Not that we believe in them, but for the sake of Q&A… why not!)

FTS: If you had to describe Whatzername is only one sentence, what would it be?

Check out the video for “Vulture” and stay tuned for an upcoming “Live From The Strait” with the band!