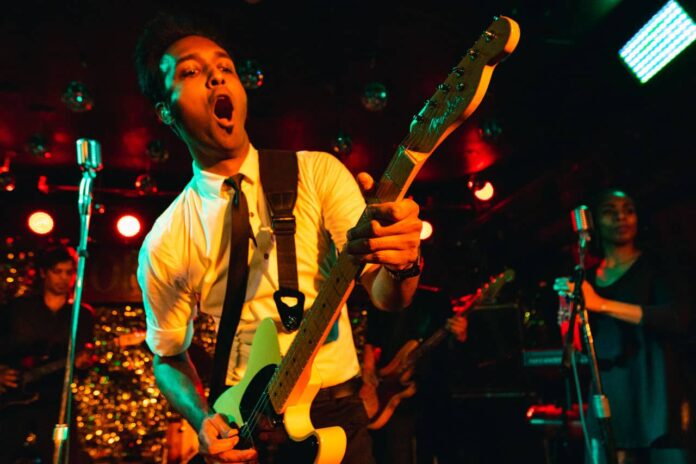 If you like a band with big sound, U.N. Jefferson should definitely be on your radar. They’re a 9-piece modern soul group from Toronto, with high-energy live shows and a unique genre-spanning vibe. They’ve recently released their new single, “Shine On Me”, so we caught up with frontman Ajay Massey to get the low-down on the band.

From The Strait: Tell us about how U.N. Jefferson got started.

U.N. Jefferson: I’ve always been a big fan of Soul music. Artists like James Brown and The Temptations have influenced my playing and writing in every band that I’ve been involved in. When the opportunity came up to start my own band, I knew I wanted to really focus on that sound. With that in mind, I started writing songs and got to the point where they were ready to play live. I formed a band around what I had written and this became U.N. Jefferson.

FTS: How would you describe your sound in 5 words?

FTS: If you could share the stage with any bands or artist, any venue, what would you choose and why?

U.N. Jefferson: Without a doubt it would have to be Raphael Saadiq with King Khan and the Shrines at The Fillmore in Detroit. I really like what they do. It would be an unbelievable show. The venue is amazing and I’m sure we would blow the roof off the place.

U.N. Jefferson: I’d still be involved in music. I have always thought that running a record label would be cool so maybe I’d be doing that. Regardless, it would be music related and it would have to involve some type of creative outlet.

FTS: What’s next for a U.N. Jefferson?

U.N. Jefferson: We’ve been working on new material and are gearing up to go back into the studio to do some recording for a new record. On top of that we’re going to continue to play as much as possible and spread the word.

Check out the video for U.N. Jefferson’s latest single, “Shine On Me”!