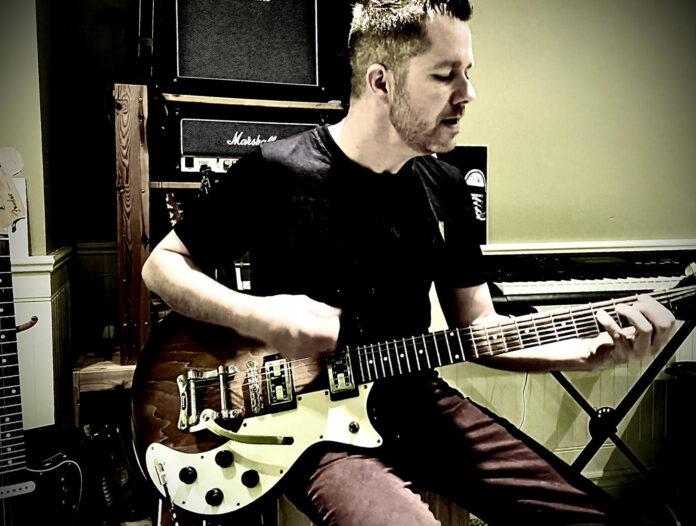 A moniker for longtime musician Pete Marino, The Trampoline Delay fuses catchy melodies and noise rock sounds with 90s and modern alternative influences. His new release “In Your Head” is the last single from his new album of the same name, both out now. We caught up with Pete to chat about the new music, his deserted island albums, and the under-the-radar bands he’s currently listening to.

From The Strait: Tell us about the new single, “In Your Head”.

Pete Marino: In your head is a song about “that person”. It could be a friend, a boyfriend, your wife, a parent, or your nagging boss! But whoever it is, they always have something to say about you or what you’re doing wrong! This song is a “FU” to them!!! Musically, In Your Head is fierce, noisy, chaotic, fast (both in tempo and in length), while maintaining an infectious quality that keeps it pounding “in your head” for days!

FTS: How about the album, also titled, In Your Head?

Pete Marino: I would have to sum it up with one word… “Eclectic”. Musically, this album showcases my love for all the different “Rocks”. Alt-rock, indie-rock, stoner-rock, folk-rock… it’s all there. A couple songs were written years ago, while most were born out of COVID isolation, and inspired by all the things going on around me. For me, early mornings no longer wasted commuting to work turned into a chance to pick up a guitar, release the stress of a crazy world and try to overcome my own anxiety, and turn those thoughts into something constructive. But it also provided a glimpse at a more troubled society. A virus culture fueled by fear mongering news outlets and money hungry pharmaceuticals. I watched friends and family self destruct under these conditions. So lyrically, there’s a lot of darkness. But definitely a very prolific time for me when it came to writing music. In fact, a good chunk of the follow-up record has been written and is waiting for its turn to see the light of day!

Pete Marino: Early on as a young kid, I would wake up to my older brother’s records pounding through my bedroom wall. He went through this stage of listening to alternative retro 80’s music like The Smiths and Echo and the Bunnymen. That music stuck with me… and to this day I still love it. I grew up on pop-punk and was big into bands like Gob, Blink 182, Less Than Jake, but to be honest, I don’t go back to that stuff very often unless I’m feeling nostalgic. For me, it’s all about indie/alt rock. Whether that’s listening to pioneers like the Pixies or more current bands like Kills Birds or The Effens. I think the 90’s/2000’s Canadian music scene by far produced some of the best indie rock bands, and if I were to drop some wisdom on young kids getting into music, I’d say go back and listen to bands like Limblifter, Treble Charger, Sloan, Eric’s Trip…. So good!!

Pete Marino: I’d probably start with “Turquoise Days” by Echo & the Bunnymen. It’s old, but it’s an amazing record end-to-end. I think all the echo and reverb just gives it this dream like quality that brings me back to my early youth. Second would be a record from the very late 90’s, called “Transistor Sound & Lighting Co.” by Transistor Sound & Lighting Co. I found this record well after the band already broke up. I was interning for a record company and digging through some drawers when I found around 5 copies of the CD. The cover art was cool and had a hand drawn reel-to-reel machine on it. I took it home, gave it a listen and went back to that drawer the next day and grabbed the other 4 copies… just to be safe. The record is hard to describe and all over the place, but it goes from screeching fuzzy guitars and screaming vocals to dreamy alt-rock campfire songs with an ever-present analog synth backdrop. Next, I would say probably the Pixies. I always hear the Pixies in newer bands that I like. They are such a huge influence for anyone in the indie rock genre. Hard to pick a record, but if I had to choose one, probably “Doolittle”. And finally… I would say “Love Tara” by Eric’s Trip. Love that band and the rawness of their music. Really noisy yet melodic.

Pete Marino: There are two that I’m really into right now… 1) Kills Birds and 2) PACKS.

PACKS has this lo-fi indie sound and “I don’t care” kind of attitude to their music. I think they are out of Ottawa, but based in Toronto. Their record “Take The Cake” is great! Kills Birds has this really emotional new wave punk guitar driven sound, and a really intense live show. Their new record is called “Married”. I think they just recently opened for the Foo Fighters so probably not under the radar anymore!! Both are amazing and worth a listen!!

Check out “In your Head”, the new single from The Trampoline Delay!