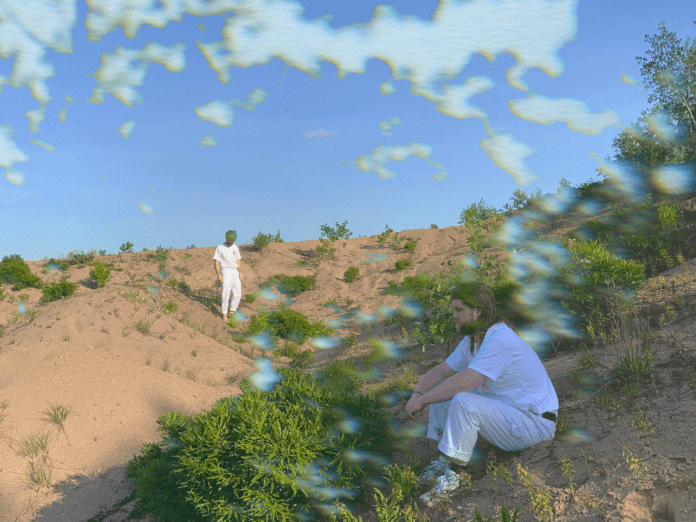 Ottawa duo Soft Top Intrepid are known for their “fizzy guitar-pop” style of indie rock. Their latest single, “Mirage” takes listeners on a dreamy, nostalgic ride, paying homage to summer’s end with jangly guitars and catchy vocal melodies. We caught up with Soft Top Intrepid members Rob LaPlante and Chris Galambos to chat about the new song, the music scene in Ottawa, and their favourite – and least favourite – part of being musicians.

From The Strait: Tell us about the new single, “Mirage”.

Rob: Mirage started earlier this year as a drum loop with bass guitar. We ended up writing the guitar hook pretty soon after we had started the track so we built the song and structure around those pieces and the rest kind of just fell into place, all while maintaining a sonic polarity from verse to chorus. Lyrically, I wasn’t necessarily writing with a predetermined subject in my head but just kind of mumbled words and melodies as we figured things out – I seemingly gravitated towards tripping up on nostalgia and getting lost in your memories so we saw it through and leaned into the subject matter that was happening. Looking back we were definitely letting the song and its parts inform the rest of the writing process and I think that paid off.

FTS: What’s the music scene like in Ottawa? Are there any local bands you think should be on our readers’ radar?

Chris: The music scene in Ottawa is great. It can be a little niche and you need to know where to find it, but all the people involved are incredible and supportive. A band to lookout for is definitely Scorpion King. They’re a “western influenced” indie-ish band. Great people. Super fun live and the perfect music to hang with the homies to.

Chris: The band and album that influenced me the most concerning this band, or style of music is definitely Nocturne by Wild Nothing. That record means the world to me. Sonically it’s lush and interesting even 10 years since it’s release.

Rob: It’s so hard to narrow down biggest influences but one that I always come back to is Local Natives – they never miss.

Rob: Favourite things? The freedom of writing whatever you want and doing whatever you want with what you’re making. How everything you make is inherently your own and nobody can replicate that because it’s you; art is so incredible and individualistic that way. Also, connecting with complete strangers through the music you make is an amazing experience. On the opposite end, the state of streaming royalties is really rough if you’re not Taylor Swift.

FTS: Let’s look into the future for a sec. The year is 2030. Streaming royalties have improved, allowing musicians to make a living with their music. Travel costs have normalized, making touring feasible once again. What’s Soft Top Intrepid up to?

Rob: Taking over the world via Soft Tour Intrepid, maybe. I don’t know. Writing and playing music – supporting my family with art that I’m stoked about would be incredible. Here’s hoping.

Check out “Mirage”, the new single from Soft Top Intrepid!