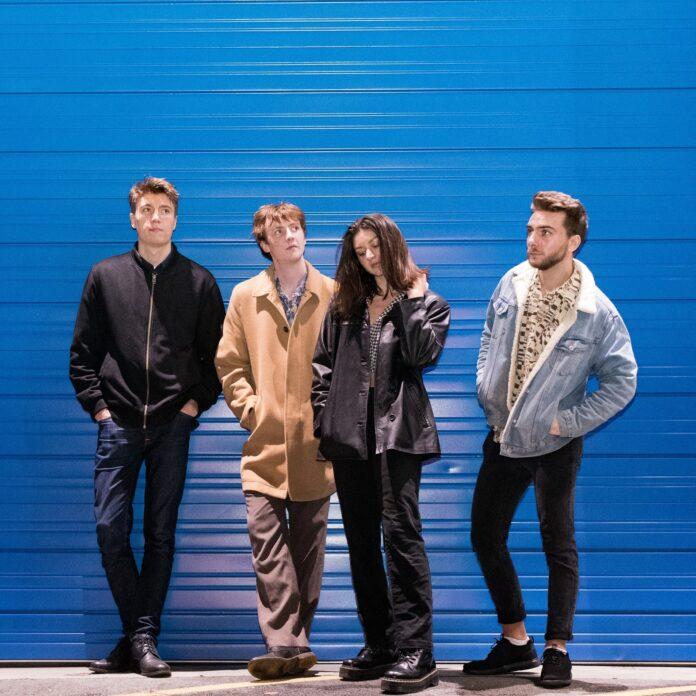 Vancouver-based band Slightest Clue create songs that mix alt-rock with jazz chords, dynamic structures, and a compelling pop appeal. Their latest single “Sibilance” is an energetic track with a sort of modernized post-punk-meets-garage-rock feel – the chorus hits just right, making this a song you’ll want to turn up and listen to on repeat. We caught up with Slightest Clue to chat about the single, the Canadian bands they’re into lately, and their non-musical hobbies.

From The Strait: Tell us about the new single, “Sibilance”.

Malcolm: Sibilance is the first song we play in our set to introduce ourselves to the audience, so it sets the tone and injects a good amount of energy from the jump. Each of us gets a moment to shine individually. Lyrically, Sibilance explores processing the loss of a loved one, especially the quiet moments alone when the world becomes still. I often find that feelings can become the loudest in the quiet, and it’s up to you to focus on these emotions and genuinely process. The bouncy instrumentation implies positivity through darkness, and that once you are on the other side, things will hurt less and you become stronger.

Sean: Sibilance is a tight indie & post-punk song where we really aren’t afraid to wear each of our influences on our sleeves. It’s a song where we collectively share the idea of just having fun in our own little ways, and express our energy.

Nick: It’s definitely a high-energy rock song with some fun surprising elements mixed in – like the outro, which kind of sounds like you’re caught in a windstorm.

Hannah: We’ve often compared Sibilance to a patchwork quilt. While recording, we wove together some of the things we love about playing with each other: blistering guitars, fuzzy bass, heavy drums, plus commanding and occasionally oddball lyrics. There’s an intense physicality to Sibilance, which comes through in the way that the four of us can’t help but explode each time we play it live. Instead of staying stuck, Sibilance gets the blood pumping every. damn. time. The movement of the song – along with the memories we have of playing it – are all a part of that quilt now.

M: Generally, I will bring a demo with some chords and light arrangement to the band, which will set a tone or vibe for us to build off of. Nothing is sacred, and the whole band gets surgical with each part, each person contributing their own ideas. We always try things once before saying no, and always try to hear one another out as we create.

S: We start with a pretty bare-bones demo, then we will dissect the living hell out of it. Sometimes it takes weeks, and sometimes just days, which is what happened with Sibilance.

N: Malcolm and Hannah work on demos sometimes together or on their own, since they usually work on lyrics or concepts. We all fine tune them as a band at band practice.

H: Getting to a finished product has always involved all four of us getting our hands dirty, pushing each other to make something better until we’re all finally satisfied. Mac and I have also started co-writing lyrics, which is more or less a first for both of us. It’s so great to be such good friends with each other at the end of the day – it means that we’re never competitive or precious with anything.

M:I’ve been diving into some local vancouver post-punk bands like Crack Cloud and Nov3l for inspiration on guitar production and overall sweet tunes! I also love some more well established acts like The Tragically Hip and Metric.

N: I’ve always been a fan of the oldies – BTO, April Wine, Trooper, The Band, The Tragically Hip

M: My personal favourite is playing and watching competitive Super Smash Brothers Melee tournaments. It feels like playing turbo speed chess and watching professionals play excites me to no end. I hope one day we can tour and bring smash along with us on tour to pass the time and maybe challenge other bands to some matches!

S: I’ve got a healthy obsession with the gym, which allows me to listen to and find new music for two hours straight while also fighting my inner demons – what’s not to love? It also helps with carrying all my guitar equipment.

N: I really like coding, and playing chess. I’m a big nerd, what can I say.

H: I’ve been reading a lot lately, both fiction and non-fiction. I do some freelance work as a live sound tech, which is a great way to enjoy music spaces without performing myself. Like Sean, I’ve also been making working out a bigger part of my life, which definitely helps when you’re a smaller-sized girl carrying a ten-pound bass guitar on one shoulder during a physically energetic set! Otherwise, I’ve been slowly picking up my sketchbook again for the first time in years, which has felt great.

FTS: What’s coming up next for Slightest Clue?

N: We have a bunch of shows coming up and we’re releasing our EP very soon. We also may or may not have our next EP in the works…

M: After this EP release on September 16th, we plan to get back in the studio as soon as possible and begin recording. Our next batch of five-six songs are already very close to complete. We’re hoping to shoot more music videos, and create a more cohesive project on this next run. This whole endeavor has been a learning experience, and we now can see ways we can be more efficient and more effective as a band on the next run.

H: Besides endless band admin and emails, I’d love to put together a small BC tour in 2023 – so stay tuned!

Check out “Sibilance”, the new single from Slightest Clue!