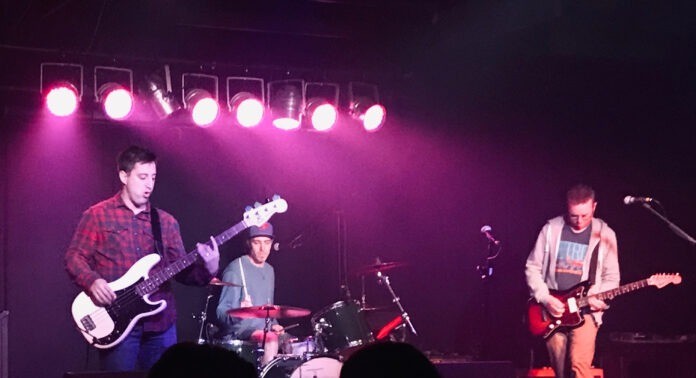 If you haven’t yet listened to Real Kevin‘s recent double album Ninety-Four, let this be another nudge to get on that. (Go ahead, we’ll wait!) The Niagara alt-rock trio has just released a video for the second single “Freak Out”, from the heavier side of the album. We caught up with the band to chat about the single, their songwriting process, and what Niagara acts they’re diggin’ right now.

From The Strait: Tell us about the new single, “Freak Out”.

Real Kevin: Our latest release is a double album, one side leans more towards an alternative, garage rock style that was heard on our track “Tired”. This newest release, “Freak Out” is from the heavier side that draws on our grunge influence. Lyrically, the song deals with the relationship we have with our own anxiety, the kind of tight rope you walk to keep it in check.

FTS: As things start opening back up, what are you guys looking forward to?

Real Kevin: Nothing can replace the feeling of playing a gig; with the nice weather we’ve been able to get together and have socially distanced rehearsals but the first gig back is going to be incredible. We are also in the process of creating more content via music videos, live versions of songs, entering as many contests as we can find, and getting back into the studio. But having an on stage view of Danny’s 1-2-step is something I never realized I would miss so much.

Real Kevin: We tend to throw as many ideas out there as possible, bulk writing vocal melodies and chord progressions and then pick whatever pieces we feel have the most potential to fully shape into a song that can fit into our setlist. It then gets reworked until everyone is really excited about what we’re playing. We trust each other’s opinion on what’s good and what stinks and needs to go.

FTS: What are some Niagara bands you’ve been listening to lately?

Real Kevin: There are a lot of great acts! I don’t know if you could call him local anymore but Mason Vail has some great stuff. We’ve been listening to some of Phil Wellman’s newest material which has been really cool, really eclectic. We’ve had the pleasure of being included in your Indie Top 30 list which exposed us to some new Niagara music we hadn’t heard before. Lastly, we’ve been listening to some early studio mixes from a to-be-named project from Marty Chorosinski that we’re really excited about, we’ve played a few gigs with him and he’s been awesome.

Real Kevin: There’s so much talent in Niagara, I feel like every time we get to play a gig there’s a new band that I’m impressed by and glad we got to share the bill with.

Check out the new video for “Freak Out” by Real Kevin!