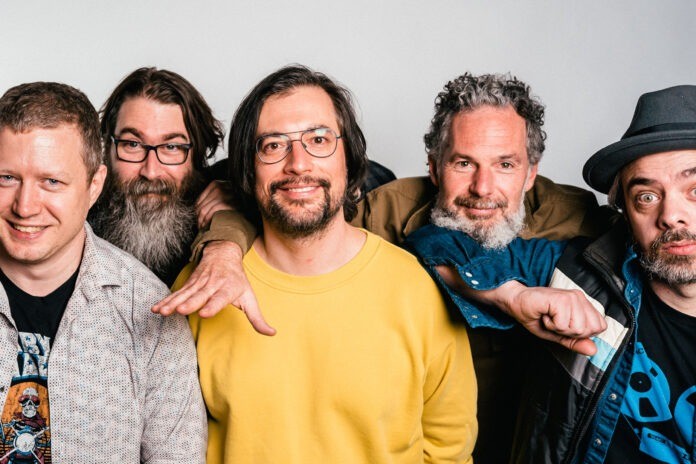 The Sarandons are a Toronto indie rock band with a unique, layered sound we love and songs that tell stories. They’ve recently released their latest single, “Stand Down”, so we caught up with the band to chat about the new music, which artists they’d put on a festival bill, and where the band name comes from. (Because we’re all picturing Susan Sarandon, right? No? Just me? Cool.)

From The Strait: Tell us about the new single, “Stand Down”.

The Sarandons: “Stand Down” is a harder rocking version of The Band. It’s packed with imagery that’s beautifully brought to life in 70’s style collage animation by Polish designer Barto Bąk. As with all our songs, “Stand Down” was born and developed through collaboration with all five of The Sarandons. In this case, the genesis of the song was Craig (lead guitar), who came in with a punk riff and the bridge chords. We channeled Courtney Barnett (“Elevator Operator”) and The Band (“The Shape I’m In”) to develop this playful rocker. I tried to deliver my best Dylan rant, while channeling my inner Bowie (shout out to our Producer on this track, Devon Lougheed, for the great note). I encourage everyone reading this to go put on some headphones – right now – and listen to “Stand Down”. We GUARONTEE that but the time you reach the last section of the song you will be imbued with boundless energy. If not, we owe you a hat – just DM us on IG with “not imbued” and we’ll send one your way.

FTS: We were obviously imbued, but still might lie for the hat!
I feel like you guys have had a successful year of putting out great music – how has your approach been different as a result of the pandemic?

The Sarandons: Appreciate the kind words. Indeed, we’ve been very busy. We’re based in Toronto, one of the most locked-down cities in the world. So we’ve had to release an EP without any live support. That said, where we would have made traditional videos (we did do one for “Lately, I Believe”), we’ve had to explore other options. If it wasn’t for the pandemic we would have never connected with German longboard dancer Giu for our wildly popular “Outrunning” video (100k views and counting!) or Polish designer Barto Bąk who developed the wonderful animated world of “Stand Down”.

FTS: If you could curate a festival (with you headlining, of course), who would you want on the bill and what would it be called?

The Sarandons: Thank you for the headlining spot! Let’s see… we’d have Courtney Barnett, Daniel Romano, Half Moon Run, The War on Drugs, Kurt Vile, My Morning Jacket, Wilco, Spoon, Cage the Elephant, Dr. Dog, Arcade Fire, Neil Young, The Strokes and Bob Dylan* (*must have Charlie Sexton on guitar). It would be a one-time free show in Downsview Park (where Toronto hosted The Stones and AC/DC for a free show after SARS disproportionally impacted our city) and we’d call it, the “After Times Festival”. From the original SARS-fest lineup we’d also bring back Sam Roberts, Kathleen Edwards, The Flaming Lips and, of course, my friends – The Guess Who.

FTS: A question I’ve wanted to ask since I first heard one of your songs… where did your band name come from? (I picture Susan Sarandon in her Rocky Horror role whenever your name comes up, and I do not know why.)

The Sarandons: Let’s make it a scavenger hunt – scroll back through our IG and you shall find some pictures that tell the story. I’ll give you a hint… there’s a connection to Phil (drums) and Spain. As for your flashbacks to the Rocky Horror Picture Show… that’s not a bad thing. That said, after watching the “Stand Down” video hopefully you’ll be picturing each of The Sarandons being taken out one by one and subsequently turning into an animals (Craig/Zebra, Ed/Octopus, Phil/Fox, Dave/Alligator, Damian/Elephant).

FTS: (To any readers whose scavenging skills are undeveloped, click here for the answer.)
Lastly, what’s next for you guys?

The Sarandons: Back into the studio to record our first full length. When we formed The Sarandons we decided to give ourselves two EPs (The Sarandons (Nov 2019), Outrunning (May 2021)) to find our identity before jumping into a full length. We’ve got about two dozen new songs ready to go and you can expect a more homogeneous sounds drawing from the best parts of the EPs. Timeline for recording is this fall so expect a full length in Spring 2022.

Check out “Stand Down”, the latest single by The Sarandons!