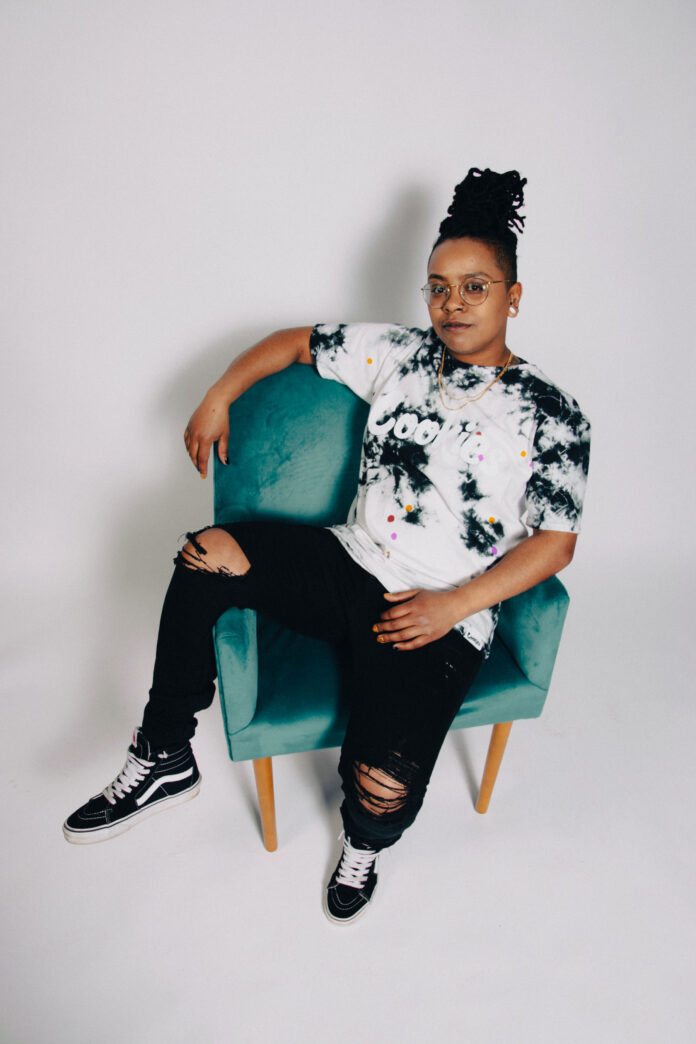 Iowa-based artist August Gonzalez would be impossible to define with just one genre. While most would be quick to call her music hip-hop, she manages to weave her pop-punk and alt-rock influences into each song, spanning genres and sub-genres to create her own style. Her brand new single, “Lxxkn 4 the L!te” does this especially well – while it seems like a pop-tinged rap song for the first few seconds, once the guitar and drums really start to kick in, there’s no denying that it’s also one hell of a rock song. To premiere her brand new video, we caught up with August to chat about the new song, her musical influences, and her writing process.

From The Strait: Tell us about the new single “Lxxkn 4 the L!te”.

August Gonzalez: Back in 2017 I started doing these “Freestyle Fridays,” and one Friday a month I would record myself rapping over a beat and post it on my socials. So the first verse of this song (with a few changes) was originally a freestyle I posted back in 2020 during quarantine over Blink 182’s song “Miss You.” I remember during this time I was a bit depressed being stuck in my room 24/7 and I just wrote about how I was feeling and I didn’t like this sad version of myself and I missed the happy fun person I used to be before covid hit. It got a great response on my socials so I decided to make a full song and put it on my EP.

August Gonzalez: I’ve always been a collector of all kinds of music even growing up. My grandparents have always been a big influence in my life and I remember when I was a little girl and they introducedme to The Beatles, I took all their Beatles CD’s and burned copies of all of them. In middle school is where I found my love for Pop-Punk. I’m still a huge Green Day to this day and Billie Joe Armstrong I love all of his work. In high school I was obsessed with Lil Wayne and Kid Cudi and I remember I wanted to be just like them but the female version, because they weren’t afraid to experiment in different genres and sounds in their music. All of these artists are still a big influence in the music I’m making now amongst a bunch of others. I don’t want to be put into a box and just make one type of music, because I enjoy all types of music and I just want to make whatever my mood and vibes are feeling at the moment.

August Gonzalez: I’ve always been drawn to music ever since I’ve been a little girl. When I was younger I would make up my own lyrics to songs that were already out that I liked and it was usually something silly because I was a goofy kid. In high school I played basketball and we would have to share the bus with the boys basketball team and in between games on the back of the bus me and a couple of my friends would battle the boys on the back of the bus. After high school I got a macbook for college and I discovered Garageband. I loved messing around with it and making my own little beats and I would write songs and show anyone who would listen to what I made. Then after a while I lost confidence in my ability and didn’t think I was really that good so I stopped making music til about 2017 and I got inspired and started recording myself putting it on socials, it went over well and then in last year was the first time I made my music available on streaming services.

August Gonzalez: For the most part I usually have to have music first before I can start writing lyrics. When I’m in the studio with Brendan and we’re starting fresh I usually tell him the vibe I’m going for, if I have a melody in my head I’ll hum or sing it for him, and we just kind of start building from there. Sometimes I do have lyrics first or have an idea of what I want to say but I still need the music in order to move forward with the song and finish it. Sometimes I get writers block when I’m trying to finish a song and I start over thinking and trying way too hard, so sometimes I’ll put that song down for a few weeks move on to something else and then circle back to it later or something will happen sometimes to where I find some kind of inspiration from the most random things and a little light bulb goes off and I’m like that’s what it’s missing.

Check out the new video for “Lxxkn 4 the L!te” by August Gonzalez!