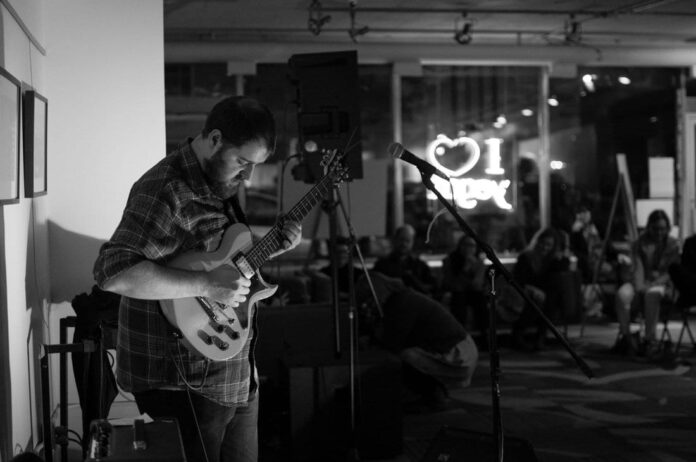 Edmonton-based singer-songwriter Jom Comyn is set to release his 8th album on Sept 6th. Crawl promises “unconventional song structures, counter-intuitive chord shapes, steady rhythms, gloomy basslines, and an unmistakable baritone singing voice. ” We had a quick Q&A with Jom to learn more about his sound, his influences, and his desert-island albums.

From The Strait: We see that your sound is described as “snowcrust” indie rock and “snowglobe folk”. Can you tell us more about what that means, because we are definitely intrigued.

Jom Comyn: The “snowglobe folk” thing was from a review in Weird Canada of my third release back in 2010, written by my pal Jessica Faulds, a great writer, and a great drummer also. For the first few years of being in this project, I was supremely uncomfortable writing about myself and my music and everything, for bios, for one-sheets, for grants, etc. But over the years, it seems like being an independent musician is 50% making music and 50% writing about yourself in order to publicize your stuff, pitch yourself to promoters, or write grants for yourself. So today i’m only medium to medium rare uncomfortable talking about myself in the 3rd person.

“Snow crust indie rock” was just a shorthand I came up with for a bio to explain how sometimes I do different genres like jazz or motown (and whatever else I feel like in the future), but the underlying thing, main music I do, is just “normal” indie rock. I hesitated to just go with “snowglobe folk” because I wanted some distance between me and “folk”, because I don’t consider what I do has ever been folk, but there is a strain of music listeners and writers for whom all music made with guitars that isn’t metal or punk is automatically folk, and I’ve been described that way a lot. I’d like to make a Folk record one day, but I just don’t think that’s my main thing up to this point. So I made up “snow crust” as a shorthand for the “normal” kind of rock songs I usually write.

FTS: “Crawl” is your eighth release – how has your music changed since your first release?

JC: In some ways, not very much at all. To a certain extent, there’s still a certain kind of visualization I think of when a song comes to me, if it’s a metaphorical physical space, like a certain room in my mind, or a certain colour, or a moment or a sensation or whatever, and I suppose there a few of those, and different songs etc, but it feels a familiar place I go to each time. There are exceptions and outliers and everything, but it’s still the same at its core I suppose.

If anything, the biggest difference is that I’m much more stressed out and neurotic about it now than I’ve ever been. When I was a teenager just writing endlessly, albums and albums worth that mostly never got recorded, in some ways that was the happiest I’ve ever been (but of course a lot of that is rose-coloured).

These days, i find it very fraught to just allow myself to connect with the ether that even permits the potential for being open to get a song idea and develop it. Now, when I get an inkling for something, before I let it flow, I’m thinking of how long it will take until I record it, who will I record it with, I think of my own limitations as a producer, and I think about arrangements and who will be my band members, will I be able to play it live, will I release it or just keep it, will I ever tour, etc, etc, etc. These things are poison to the creative process, but the further along I go, the more outside material comes to bear on this. So I definitely need to find a solution to that.

FTS: Who do you consider to be your biggest influences?

JC: I never know what to say to these. I’ve been influenced I’m sure by hundreds of artists, thousands of songs. It’s tempting just to pick all of the music that kind of sounds like me, the low-voiced singers so: Jim Morrison, the National, and Crash Test Dummies. But really I’ve probably heard more minutes of Weezer in my life than anything else, probably even the Beatles at this point, from those few intense years as a 14-16 year old when I listened to stuff over and over endlessly. Some respectable standards I fall back on are Beach Boys and Beatles, which I love truly and deeply, but I’ve been through intense fervent phases lots of music of varying levels of division, including the Doors, Metallica, Miles Davis, Sinatra, Bob Marley, the Strokes, Interpol, classic 50’s like the American Graffiti soundtrack, mainstream 90’s radio top 40 (I’m sure there are a few Now compilations that summarize that stuff neatly), Smashing Pumpkins, the Hip, the Clash, Sex Pistols, the Pogues, the Rapture, Queens of the Stone Age, then Broken Social Scene and Mogwai, My Bloody Valentine, Sonic Youth, Canadian indie stuff like Van Gaalen and Chet, and lots of other stuff.

I try to be open to whatever, which I know everybody says, and I have my boundaries, but I try to enjoy whatever it is, and not reject anything on ideological grounds. I try to maintain the genuine, visceral, spiritual enjoyment I had seeing Merzbow shred pure noise in to the atmosphere for 90 minutes at a live show, but also the pure unadulterated pop joygasm I experience when I’m at Shoppers Drug Mart and the Bryan Adams song with Mel C comes on (come to the think of it, the Spice Girls belong on that list up there).

FTS: It’s the worst game, but we’re gonna play it – Desert Island Albums. If you could only pick 3, which would they be?

JC: Just for the sake of the game, let’s say Magical Mystery Tour, Smile (the Smile Sessions I believe, whatever the one with the original recordings assembled in 2011 as close as possible, not Smiley Smile or Brian Wilson Presents), and the last one….this is hard! Let’s say Kind of Blue.