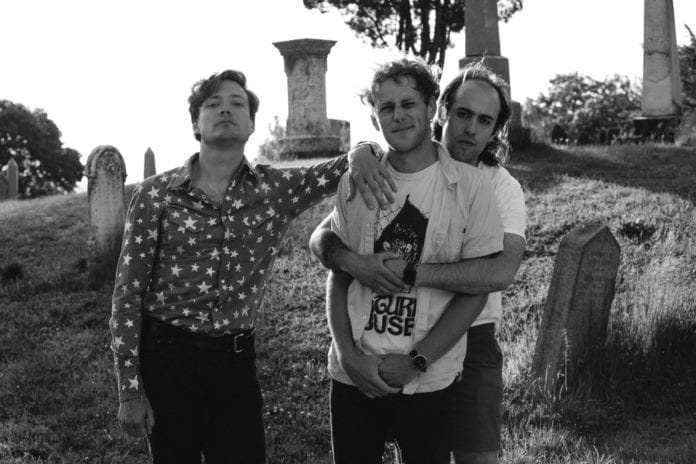 One of our favourite bands is back with a brand new tune – The Dirty Nil recently released “Done With Drugs”, a power pop/rock anthem previewing their upcoming album. We chatted with Nil bassist and overall hype-man Ross Miller about lockdown tunes, the feeling of following up Master Volume, and each member’s superpower.

From The Strait: One benefit of social distancing and lockdown has been many artists creating and releasing new music. With the three of you living in the same house, how often have you found yourself working on new music, or just jamming for fun?

Ross Miller: It has definitely always been beneficial for us 3 to be living together. We always inspire each other to work harder on our craft and there is always some kind of noise coming from someones bedroom. Luke and I covered a John Prine song after his passing and I thought it was a great way to honour his life. We also covered “I Saw a Tiger” from the show Tiger King with our other roommate Brett from the Glorious Sons. I personally played bass on about 15 songs for people around the world from my bedroom and that was a humbling and creative experience. It has been nice to see people from all creative outlets having time to work on their craft. I am hoping it creates an incredible artistic boom once this pandemic passes.

FTS: “Done With Drugs” is decidedly poppier than the usual Nil offerings (did we dance around our FTS office when we heard it? Maybe.). Was that a conscious decision, or just what came naturally?

RM: I’m glad you are digging it and dancing! Every NIL song is created very naturally. The only thought put behind each song is to make the best version of the idea that is brought to the table. We all listen to lots of music of all genres constantly so sometimes the initial idea that is brought to the jam space sounds very different then what we are used to. At the end of the day after the 3 of us truck away at the songs they always end up sounding like us.

FTS: As you’re working on a new album, what’s the general feeling about making a follow-up to a powerhouse album like Master Volume? Do you feel the need to stay in similar lanes, or veer as far from the album as possible?

RM: I personally think it would be impossible to make another record just like Master Volume. I love the record and I love the previous records but it wouldn’t be very fun if we tried to create a formula for the way we write songs. We are very open as people and as musicians so things are going to evolve and change as we grow. On our new batch of songs I played way more intricate bass than I did on Master Volume, only because that’s the way I was feeling when we wrote them. We are all happy to continue to build a strong body of songs for people to enjoy and create a bigger live show.

FTS: Watching your “Live At The Opera House” concert when it premiered recently made us really miss watching you guys live. What do you miss most about performing/touring?

RM: Aww well we miss you too! I’ve been asking that question to myself very often. The other day we did a “secret” live session at the Phoenix in Toronto to an empty club. It was fun to be on stage with my two best friends and play, scream and jump around. It was the first time in a long time I felt like myself. I also miss making people happy and giving them a chance to forget about all the crazy real life stuff that’s going on at home.

FTS: If The Dirty Nil were superheroes, what would each member’s superpower be?

Check out The Dirty Nil’s latest track, “Done With Drugs”!