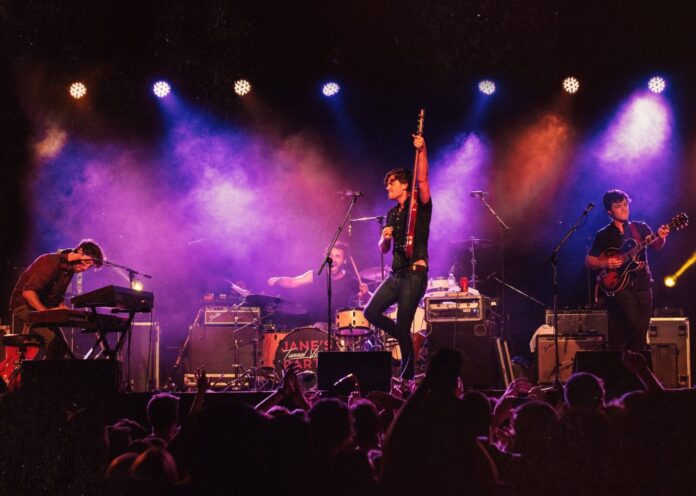 Toronto-based pop-rock band Jane’s Party are known for their collaborations and song remixes – their recent re-imagined release with singer Skye Wallace is a prime example. We caught up with the quartet to find out how they choose the songs, the most memorable of their many performances at Cameron House, and their favourite venues.

From the Strait: You’ve done a lot of re-imagined versions of songs. How do you decide which songs to do?

Jane’s Party: Often during the process of recording a track for an album, a song will change quite drastically, leaving behind almost all traces of the original demo. Presenting a tune in it’s original or demo’d form is most often the catalyst for a re-imagined release. This was the case for Tunnel Revisions and we’re very happy that we get to share both versions with the world.

FTS: Your history with the Cameron House (having seen you back up several artists and perform on your own) is there any single performance there that stands out as your favourite?

JP: We’ve played the Cameron House front and back room so many times it all kind of blurs into one long epic show, but if we had to pick one it might actually be Brad Dalgarnos 50th birthday party. We were the house band for the night and got to host a handful of iconic musicians and personalities including Jim Cuddy and Ron Maclean.

FTS: Cameron House aside, you’ve played a lot of impressive venues. What are a few of your favourites?

JP: In Canada Kee to Bala is always a blast and of course Danforth Music Hall is such an iconic Toronto stage to play on, but one of the wildest venues was actually a hockey arena in Prague to roughly 4 thousands screaming people. Let me just say even with all those bodies it was still VERY COLD but an experience we don’t get too often and won’t forget.

FTS: Name a dream artist (any genre, living or dead) that you’d love to do a collaboration with.

JP: The Beatles of course. Double drum kit, who wouldn’t love it? And think of the harmonies! So many harmonies!

Check out “Straight From The Heart”, ft. Skye Wallace!