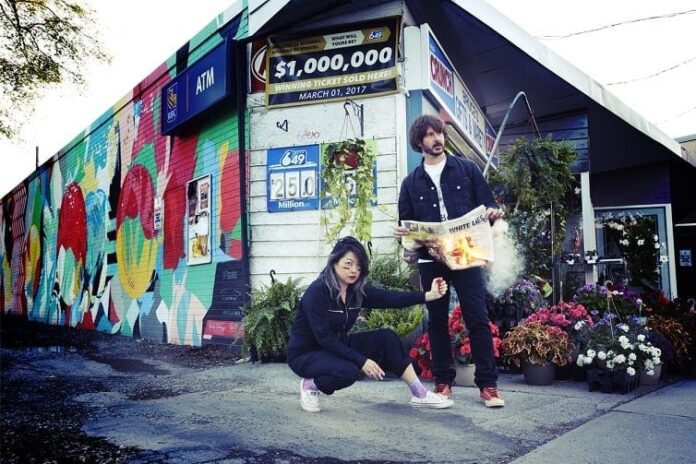 Dearly Beloved are gearing up to release their next record, Times Square Discount, an album conceived on the road during their seemingly endless touring. At the end of August, they released the video for their single “Race to the Bottom” – we caught up with the duo to chat about the video, their new album, and who they’d love to tour with.

From The Strait: The video for “Race to the Bottom” looks like it was fun to make. Tell us a bit about shooting it.

Dearly Beloved: This song is a dedication to the moms and pops, grandparents, etc that worked tirelessly to bring their families a better life. It’s a tribute to our history growing up in those aisles and as immigrants building up our communities.
We shot this in a store in Chino, California, not far from the neighbourhood where director Michael Estrella grew up. it was long day shooting promos and the video – James DiSalvio makes a cameo in the promos as Al Pachinko, a character we made up wandering the streets of Japan. So does Robert
Mukes from House of a Thousand Corpses (Rob Zombie). Let’s just say it took me a lot of takes to get my backroom security shot just right …

FTS: Describe your sound in six words or less.

FTS: What can we expect from your upcoming album, “Times Square Discount”?

DB: It’s a ten song experimental barrage rock / avant-pop journey. The last record was recorded in 30 days. Times Square Discount took almost 3 years.
A lot of what we wrote was inspired by the travels we have taken. We‘ve played 27 countries to date and in that time we’ve gone down several rabbit holes researching the moments and histories that have gotten us to where we are now. There are several guests on the record – Dimitri Coats (OFF) on
guitar, James DiSalvio (BranVan 3000) with Maia and Lorca Cohen, Jordan Lawlor (M83) and new additions to the band Tyler Beans and KT Lamond (Like A Motorcycle). It’s still the bass driven songscapes you’ve grown to expect from us but also some added avant-pop elements that might surprise you.

FTS: You’ve been touring with Sebadoh – is you could tour with any three bands (any genre, alive or dead, no rules!), who would it be?

DB: The Jimi Hendrix Experience for the inspiration
Steve Seagal aka The Mojo Priest for the comedy
Parliament Funkadelic for the spectacle

Check out Dearly Beloved’s latest video for “Race to the Bottom”, and stay tuned for the new album Times Square Discount, out on October 25th!