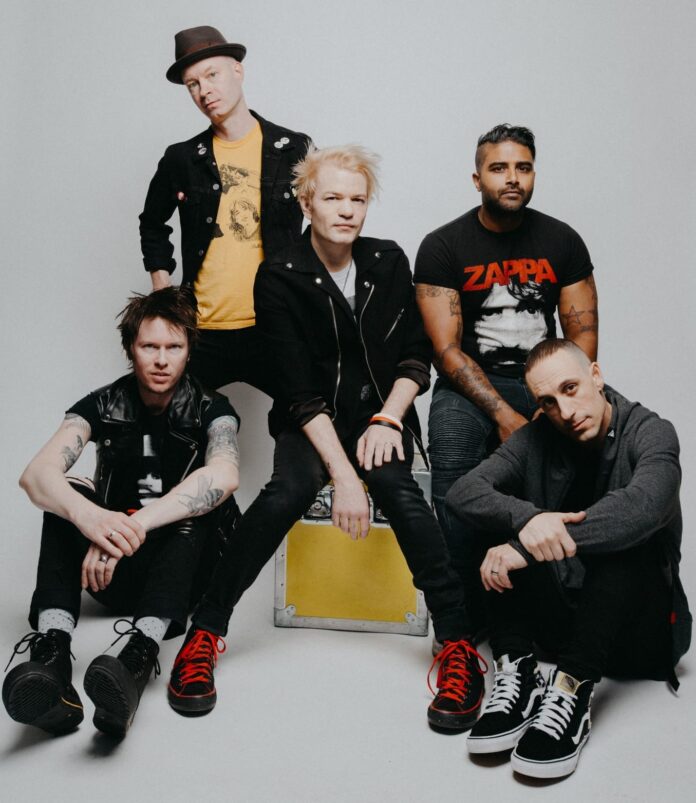 With their 7th studio album, Order in Decline dropping on July 19th, Sum 41 is back in full force with a decidedly heavier sound. We had a quick call with guitarist Dave Baksh while he was in Niagara recently, chatting about the new record, metal bands, and “holy shit” moments.

FTS: So, 7 records deep, how has the excitement level changed over the years? Do you still have a nervousness about putting stuff out?

DB: Yeah, we’re always so in our own world when we’re creating. Especially this record, a lot of it, the demos were complete by the time we got them. We went into pre-production, and when we were tracking this record, we all did it in our own studios except for Derek and Frank. So hearing the collective work afterwards was wild. It’s always nerve-wracking to put something out but at the same time, this was something where we were like – we felt really good about what we did, so we have that feeling about at least we tried as hard as we could.

FTS: It seems like this new album is one of the heavier-sounding albums you’ve put out. Since your other bands – Brown Brigade, Black Cat Attack – are a little on the heavier side, did you have a big influence on the direction of Order in Decline?

DB: Actually for Order in Decline, Derek brought the demos to us, and was kinda like “ok well, learn these & we’re gonna go into pre-production”, and we went into pre-production for the second stage of demoing and… there was not much to change. Usually we’re dissecting songs,  like “this needs a new bridge, this needs this.” But it was pretty well complete.

FTS: Maybe Derek’s coming around to your heavier sound!

DB: Y’know, we’ve been fans of metal since we were kids. He was more rock ‘n roll, kind of Guns ‘n Roses, who rode the edges of metal a little bit. But in “Welcome to Hell”, when Jamie Thomas was ridin’ that rail to “Hallowed Be Thy Name”, we were all into that. There was no question.

FTS: So what bands influenced you growing up?

DB: Maiden for sure. I think between all of us, it was a lot of different bands, but genre-wise it was everything. Grunge, metal, punk rock, funk, hip-hop, rap, everything just kinda collectively came to us. And got put into our music.

FTS: How does it feel to be that band now for a new generation of younger bands, to be an influence on them coming up?

DB: It’s pretty surreal. We would go up to guys like Fat Mike and say “we’ve been listening to NOFX for ages.” It was rad. I would go up to guys in Anthrax and be like “Yo, man, this was the first riff I ever learned on guitar!” and to have that kinda stuff being fed back to us, we can’t even believe that we are one of those bands. Because there’s a really low percentage of bands that live past the first ten years of their career. It’s not a common thing.

FTS: That leads right into our next question, do you remember the first guitar riff you learned?

DB: Oh absolutely, I was sitting there in my cousin’s basement. He was playing Battle Toads. And I was plucking away on a guitar on the couch behind him and he presses pause, and he looks at me and he’s like “no man, you don’t hold a guitar like that”, cuz I was holding it like Jeff Healey would play.

So I had it down on my lap and I was trying to play like that, and I was like “yeah, this is a cool way do it because Jeff Healey does it this way” and then he’s like “yeah man, no it’s not.” Lifted it, put the pick in my hand, showed me how to hold it. And then sits me down with Guitar Magazine, and one of the riffs that they had picked that month’s past was “Caught In A Mosh” by Anthrax. So yeah, that was the first one I’d ever learned. He taught me how to read tabs, and I was playing that riff for awhile, trying to impress girls and stuff

FTS: (Nolan) The good old days of Guitar Magazine, with the tabs. A guitar player myself, my first one was “Hanger 18” by Megadeth, that was my first riff.

DB: No way, I remember actually  – didn’t they have “Hanger” and “Holy Wars” in the same magazine?

DB:  The one with Mustaine on the cover, right?

FTS: Yes! Awesome. So what’s your biggest “holy shit” moment that you’ve had? Because you’ve shared the stage with so many different acts, we’re wondering the biggest “shake your head” moment” was – where you can’t believe you’re actually sharing the stage with this band.

DB: It would’ve been probably the Metallica Icons performance. We had come up with idea of doing a medley of “[Enter] Sandman”, [“For Whom the] Bell Tolls”,  and “Master of Puppets”.  So we worked it all out, got it all done, and when Metallica heard it, they were like “yeah, so that’s what we’ll come out to during the show”. We were like “what?! Ok… you’re gonna walk out to that…” I guess we’ve gotta do this really well. So opening the show, we’re sitting there, guys are looking at Cone, making the finger across the neck like “yo, don’t screw up or I’ll kill you”. So I’m thinking “Oh my gosh, I don’t solo like this, I don’t solo like Kirk Hammett, I solo like me, like the dude from Face to Face, that’s how I solo”.

Then it kicks off and we’re just flying through the tracks, and people are loving it, and even though he had to be like 100 feet away from me, I could see Kerry King’s face super sharp. There was no audience, there was just him staring into the depths of my soul. Like “don’t mess up, don’t mess up…” We broke into Sandman, and Metallica comes out, and we break into “Master of Puppets”, and that was the “oh shit” moment, I think, as far as being on stage with another band.

FTS: That’s a pretty damn good one. Do you still have nightmares of Kerry King (of Slayer), staring at you?

FTS: So you’re right in the middle of festival season, Disrupt is coming up this week for you guys.

DB: Yeah, we just got off 3-4 weeks in Europe, and that was incredible. We got to play Hellfest and Download in Madrid and we’re headed into Disrupt with some good friends.

FTS: If you were curating a festival, what would be the top three acts you would want? Any genre, really.

DB: Kim Mitchell. The Guess Who. And, uh… do we bring in Bryan Adam, or do we go with Kickaxe or Sword? And for something special , Toni Braxton.

FTS: That puts Bonaroo to shame.

DB: Yeah, I think it’s the best festival ever made. Ever.

FTS: Thanks so much for the call, we wish you nothing but luck with the record and hope you enjoy Port Colborne.

DB: Always  do! Next time I’m in Port Colborne we’ll let you know, and I’ll come right into the office and hang out way too long.

We’re gonna hold ya to that, Dave!

Stay tuned for Order In Decline, Sum 41‘s latest album, dropping July 19th. In the meantime, you can check out the first single, “Out For Blood” on all streaming platforms.