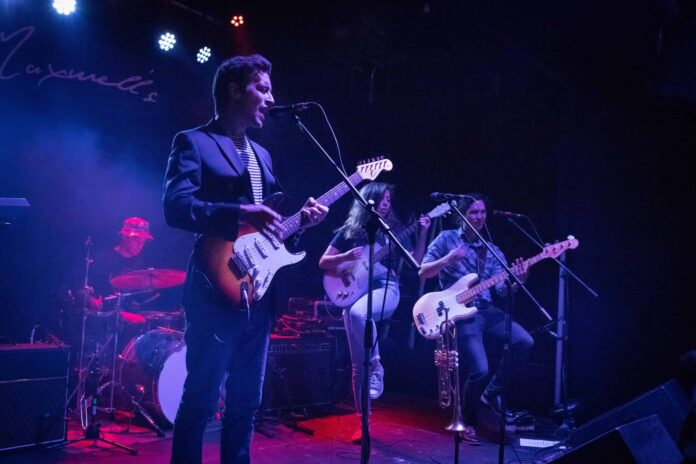 Hailing from Kitchener, 12 Mile Island is an indie rock band with blues, pop, and R&B vibes. With a new single just released, they’re getting ready to head out on tour, including a stop at Sanctuary in Ridgeway on May 15th. We caught up with lead guitarist and Niagara native, Nic Nolet to learn more about the band – how they started, who they consider influences, and their desert album picks.

From The Strait: How did 12 Mile Island form? And how would you describe your sound to anyone who hasn’t heard you yet?

12 Mile Island: We formed in September of 2018. We are made up mostly of Laurier Music graduates, and we all met through playing and jamming with musicians in Waterloo. We started writing almost immediately, and we realized that our styles and our sense of humour gelled really well. We have had a hell of time deciding what our sound is. It’s definitely groove-based, danceable, but the guitar is dirty and the lyrics are thoughtful. We are proud of our debut release, a song called “Lioness”. We find it’s our favourite song to play live and really exemplifies our sound.

FTS: Who were your musical influences growing up, and how do they differ from your current influences?

12 Mile Island: Most of us grew up listening to what our parents listened to: good old fashioned Canadian rock and roll. That has changed, we listen to a lot of R&B, Neo-Soul and Funk. But the beauty of it is we are trying our best to find a marriage between those two camps. We want the lyrics to be meaningful, we want classic guitar tones, but we want there to be groove and we try to make sure the instrumentation is thoughtful and tasteful. If you were to isolate each one of us, you’d hear our different influences, and that has really helped us as a band.

FTS: If you could play any venue, co-headlining a bill with any band, where and who would you choose?

12 Mile Island: This is tough. SO TOUGH. I think I speak for all of us when I say that Red Rocks is a dream venue. As for the co-headliner, the band that we can for sure all agree on is Vulfpeck. Those guys are doing everything right.

FTS: It’s a damn tough question, but one of our favourites – if you were stranded on a desert island, what albums would you want with you?

12 Mile Island: Ok, this is the best list we could come up with:

To Pimp a Butterfly – Kendrick Lamar