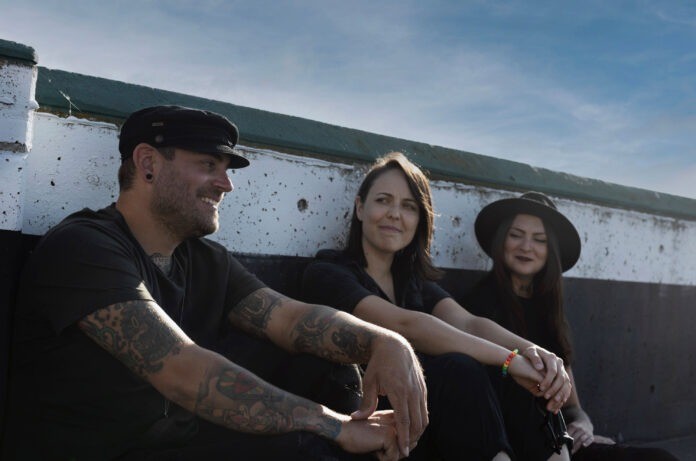 Niagara’s own indie synth-pop three-piece Years of the Modern may be a fairly new band, having formed during the pandemic, but the members each have their own long history as musicians with very diverse backgrounds. Amanda, Jason, & Lauren have just released their much-anticipated second single, “Aerosol”, so we caught up with the band to chat about the music, their individual influences, and what’s next for them.

From The Strait: How did Years of the Modern get together?

Year of the Modern: During lockdowns and feeling the loss of not being able to see live music or play with their other projects, Jason Edonel and Lauren Leprich began to write instrumental tracks inspired by their love of 80s post-punk and new wave. Delving into synthesizers and drum machines along with traditional instruments, they began to develop a new sound that combined those sounds of the past with the indie pop, alternative and synth pop styles of present. Realizing they would need a vocalist to complete the project, they began to show their instrumentals to friends. When close friend and incredibly talented singer-songwriter Amanda Lyn Parker heard the songs, she asked them if she could sing for them. The songs came fast and naturally and soon they had a full set and record’s worth of material.

FTS: Tell us about the new single “Aerosol”.

Years of the Modern: The inspiration for the song came from the image of an aerosol can being sprayed near a flame. We related it to a relationship that grows out of your control- it was meant to be something casual but somehow it got out of hand and real feelings got involved. Then you’re left not knowing how you should deal with it, especially if you felt unprepared for a true commitment.

Lauren:I was raised on everything from rock to jazz to pop to reggae and everything in between. In high school I was heavily influenced by ska bands like Less Than Jake, Goldfinger, Reel Big Fish etc and played bass in a ska band for several years. I then began drifting into more of a folk/rock/Americana style listening to artists such as Tallest man on Earth, Jason Isbell, Amanda Shires, Trampled by Turtles, Shovels & Rope, and Nathaniel Rateliff, to name just a few. Throughout it all I’ve always loved more pop driven bands (like Chvrches), and have also recently rediscovered a love for post punk/new wave  (ie. Joy Division, the Cure, The Smiths, New Order, Interpol ) and am really enjoying new discoveries (such as Graveyard Club, Black Marble, Drab Majesty, Cold Cave, Softkill, House of Harm, Korine, and more).

Jason: my biggest influences growing up were all pop/skate punk, emo and hardcore bands. And I still love all of that to this day. However, opening my mind to genres I refused to even acknowledge when I was younger like folk, electronic, pop and indie stuff has made all the difference in not only my playing, but my musical enjoyment overall.

Years of the Modern: We thought about this as a band and realized we’d mostly want our friends and fellow musicians in that room with us. The Mandevilles, JIN, Little Nerves, Pindles, Arih SK, Cubs Refrain, Strange Shakes, Charles J Hunk and the Trainwreck, Stereo Sunrise, Road Waves, Moonfox, Sine Language, Sleepy Jean, Minumum Wage, The Holdouts, My Son the Hurricane,  Whatzername, Matty Leon, Twin Rivals. Most of those are from our area, and around here is just boiling over with extreme talent. We’re probably missing some, and will kick ourselves later.  Of course we could also say that some heroes and faves like The Cure, Josiah Leming, Smashing Pumpkins, Chvrches, The National wouldn’t hurt being there either 😉

FTS: You’re a fairly new band and are only two singles in – so this may seem a bit premature – but what’s next for you?

Years of the Modern: Our third single is already in the works and will be out as soon as it is ready. We have more than enough material for a full length, and are working that out to see which ones will make the record, which we plan to release after a couple more singles.

Now that things are opening up we hope to start playing out live and showing these songs to the world!

Check out “Aerosol”, the latest single from Years of the Modern!