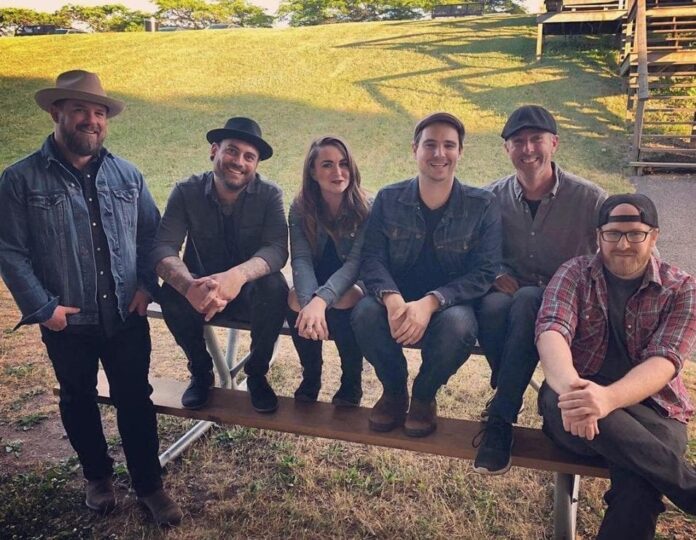 Niagara six-piece The Weather Wild is back with the second single from their upcoming self-titled EP. With a sound that blends alt-rock with a bit of twang, their latest single, “One More Round” offers up the toe-tappin’, butt shakin’ style that fans have come to expect. We gave each member of the band one question to get to know them a bit better.

From The Strait: Question for Kevin (drummer) – Are there any drummers you look up to? What drummers do you draw inspiration from today?

Kevin: When I started playing many years ago I drew a lot of inspiration from Dave Grohl. His energy  grabbed me and showed me that hittin em hard isn’t always a bad thing. Christian Tanna made me learn to use the entire kit, not commit to a standard formula and feel the groove. Taylor Hawkins is just a whole lot of fun to watch and his stick work is something I aspire to learn. Those three are the drummers I try to draw a lot of my style from.

FTS: Question for Brad (bassist) – Prior to being in The Weather Wild, you were in punk bands… what is the biggest difference between playing punk and what you’re playing now?

Brad: Punk rock is definitely my first love, but I’ve jammed and played with so many people from different backgrounds and influences that I think music is music is music no matter what you’re doing, just enjoy it, as long it’s fun, it’s worth doing.

But really the biggest differences between playing in a punk band and playing punk shows  versus playing the weather wild and our shows is there’s isn’t anyone drinking warm 40 ouncers in the parking lot, zero fights and I don’t think anyone has lost their shoes… come to think of it maybe we should mix in a rancid song here and there? What do you guys think?

FTS: Question for Nolan (singer / guitarist) – Aside from The Weather Wild, you also have a solo project – how do you balance the two? Is there any crossover, or do you keep them separate?

Nolan: The solo stuff is always interesting because I get to present a different side of me – I’m a little more sad bastard when writing solo… With the band we get an idea and flush it out and it’s generally just way more fun and exciting. We put all of our fingerprints on it until it really starts to resemble a Weather Wild song. Solo you don’t get that same luxury of sharing ideas…it’s all you. You’re fully on display. For better or for worse. I think this band just makes me better…without the worse.
Live, I think just about every member of the band has joined me on stage for shows…I love that too…the way they are able to elevate my songs live – blows me away every time . I am Definitely lucky to be surrounded by such talented people!

FTS: Question for Lauren (fiddle player) – You’re a multi-instrumentalist – what is it the drew you to the fiddle?

Lauren: I grew up in a very musical household and consider myself very fortunate to have been exposed to many different styles of music from day one.
One of the very first concerts I attended was to see Yanni when I was about 4 or 5 years old, and his fiddle player Karen Briggs absolutely blew my mind. After attending that concert I used to go around the house with a ukulele we had, trying to hold it like a fiddle. I then got a chance to see Natalie McMaster play in Toronto later that year. I was just instantly drawn to the fiddle from that young age and never really looked back

FTS: Question for Jay (guitarist) – The Weather Wild has gained a pretty sizeable audience rather quickly. What do you attribute the success of the band to?

Jay: I think our ability to draw influence from such diverse musical backgrounds and genres from folk to punk to straight up rock n roll  gives us a broader audience while allowing listeners to experience something a little unique. People seem to like the amalgamation of styles and they get to enjoy music outside their regular listening habits. Hopefully we continue forward with the growing crowds and expanding interest!

FTS: Question for Sandro (pedal steel player) – You, like Lauren, are a multi-instrumentalist – if you weren’t playing pedal steel, what other instrument would you like to introduce to the band’s music?

Sandro: I’ve become a huge fan of the tenor guitar. It’s sounds like a guitar, it looks like a guitar. It’s tuned like a violin or mandolin. The 5ths tuning lets me play things that would be otherwise unavailable with a guitars standard 4ths tuning.   It’s also 60% less strings than the pedal steel – which is a nice mental break sometimes.

Have a listen to their new single, “One More Round” below, and stay tuned for their debut EP. And don’t forget to grab your tickets to this year’s Cicada Festival, where the band will be performing alongside a stacked lineup.