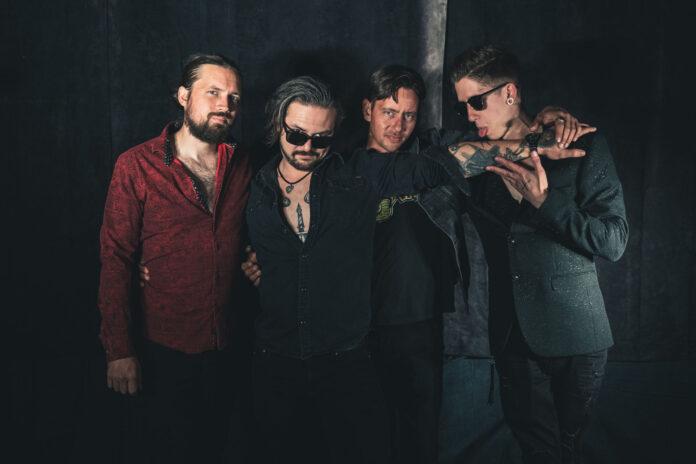 If you don’t know Vogue Villains yet, their brand new single is a killer introduction to the Vancouver Island-based band. Released yesterday, “Wrong Side of Midnight” is an alluring alt rock track with driving guitar riffs and a lot of swagger – perfect for fans of Queens of the Stone Age and Royal Blood. We caught up with the band to chat about the new song, how Vogue Villains got together, and the most intense show they’ve played thus far.

From The Strait: Tell us about the new single, “Wrong Side of Midnight”.

Vogue Villains: On the surface “Wrong Side of Midnight” is a song from the perspective of a vampire that cares more about how they look than they do about drinking the blood of the innocent, but underneath the dirty rock exterior and massive energy is an anthem about knowing exactly who you are and feeling more than comfortable in whatever supernatural skin you’re in, a song about busting through the constraints of who you’re told to be, all while flipping off anyone who has something to say about it.

FTS: How did Vogue Villains get together as a band?

Vogue Villains: Both Andrew and Lucas had been musicians in the city of Campbell River for years, always playing in different groups and appreciating one another’s talent from not so afar, even joining each other live on stage just because they were friends, although they never found an opportunity to be in an actual band together. Jump to 2017 when the time was right, they FINALLY found themselves in each others orbit and as soon as they began writing together they instantly knew that this was the perfect match and it was a long time coming. As they continued to produce material together, through the spring, as well as playing shows for another project that was at its end, that summer they decided upon the moniker of Vogue Villains.

They had a name and they had some songs, even playing live with other people, but it was not until they met Nate Cox that the band really began to feel like the real VV. Nates unique approach to his musicianship as a drummer was a perfect fit for the new music. Rock, harmonies, twists and turns was the new sound. And although the collaboration was probably chaotic at first, the immediate chemistry, between the three made Nate joining the band the obvious best choice.

But it was not until the addition of Rob Johnston in 2019 that the circle was complete and ultimately cemented what Vogue Villains consider their true creative form. Playing the part of multi-instrumentalist, he brought his own style and challenged everyone else to bring up theirs, by way of self taught guitar playing and meticulously written keys, layers of not only synth but deep atmosphere. Even though he was asked many times to join before he did, and he had never truly played outside of his tiny closet studio, Rob quickly became an integral piece of what really makes us VV.

FTS:Every band has their own way of creating songs – what is your songwriting process like?

Vogue Villains:  The way we typically write songs varies with each one. Quite a few songs have been sparked by a set of riffs, a cool beat, a few lines of lyrics, or even a droning synth sound but generally our process revolves around one member bringing in a skeleton, whether it be fully fleshed out or not. We then come together as a band to flesh out riffs, beats, melodies, harmonies, etc. Arrangements usually end up changing as we continue working the ideas and making it into a real song, but there are also cases where things have stayed exactly as originally written because it just works! The source of the next song is always a bit of a surprise, but it makes for an eclectic catalogue that is ever growing with the many new songs burning holes in our pockets waiting to get the full fledged VV treatment.

FTS: What are some under-the-radar Vancouver Island bands you think our readers should be listening to?

Vogue Villains: One of our coolest and intense shows was at a venue called the Victoria Event Centre in Victoria, BC. It was our first real entry into the city/music scene where we connected really well with the crowd and made a big impact, everything had gone pretty perfectly until the very end of the set, the band was hammering out a trashcan, everybody was freaking out and giving it their all right until the very last note… When Andrew swings his bass back and cracks Lucas in the head with a tuning peg. He starts pouring blood down the side of his face, unbeknownst to Andrew as he continued to thank everyone for the amazing show, Lucas came up to the mic and asked the crowd “Is my face bleeding?”, to a resounding YES! Immediately the band, and the crowd came together to check on him, but not before taking some great photos of the carnage. Throughout the rest of the night people continued to ask if we had staged the hole thing with a blood capsule, or if he was hit on purpose for the show! It most definitely was not, but it was hilarious and a great way to end our set before another band had to follow!

Check out “Wrong Side of Midnight”, the new single from Vogue Villains!