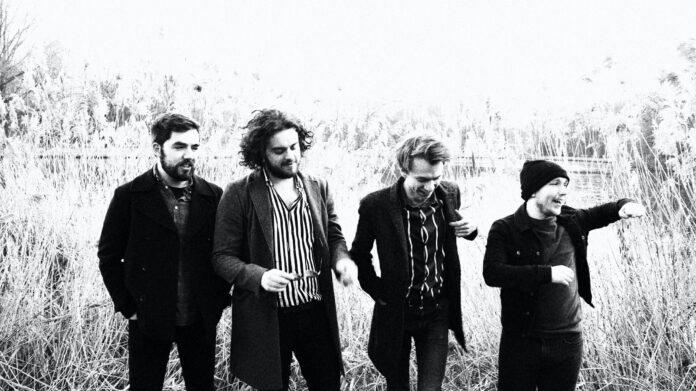 British alt-rock four-piece The New Nostalgia have just released their first single of 2022, “Ibis Budget”. Taken from their upcoming debut album, Bleed & Bloom (out this August), the single is an edgy, tongue-in-cheek rock track with a post-punk feel. We caught up with the band to chat about the new song, under-the-radar artists they’re currently listening to, and their superhero alter egos. (Superglue Dude may be coming to your rescue one day soon!)

From The Strait: Tell us about the new single, “Ibis Budget”.

Patrick McCallion: So around five years ago I moved to The Netherlands and had to spend two weeks or so living out of a hotel near the airport while I tried to find a place to live. It was a really odd and chaotic time and I’d been meaning to write a song about it for ages. During the pandemic inspiration finally struck, probably due to some similar vibes from being stuck inside and the track came together pretty quickly. I think the track does a pretty good job of capturing the madness of these liminal hotel rooms. I listen to a lot of Yard Act, Viagra Boys, KEG, Horsey, those sorts of bands and I think that inspiration comes across in the tune.

FTS: How did The New Nostalgia become a band?

PM: We met studying music at University in Liverpool but never formed a band while we were there for some reason. It was only a couple of years after we graduated when we started getting together in London to jam, mainly just as a way to keep in touch and hang out. The rest has been history!

Charles Adey: I spent all three years of uni trying to form this band, but everyone had a lot of projects on at the time. We had unlimited access to free rehearsal spaces at university, so of course it was only logical to wait until we had graduated and moved into three separate cities (and two countries) to form a band.

Sam Bramhall: I’ll fully take the blame for the delay of us forming the band. I was already in a band (or 3) and I couldn’t commit when I really should have, hindsight is a wonderful thing eh?

James Sands: Fortunately for me and Charles, us living in London meant that it made the most logistical sense for the band to rehearse there, so I couldn’t resist the convenience/didn’t have a good enough reason to say no.

PM: I host a new music show on In Your Ears Radio and it’s been a really great excuse to discover new talent. There’s a bit of a running joke on my show that I always play this band LOBSTERBOMB from Berlin. It’s very cool, in-your-face Indie Punk and I really can’t get enough of them. I’m dying for them to do a show near me sometime soon! I also have to mention Benefits who are really blowing up at the moment. I’m obsessed with the aggression in their tunes and I listened to them a lot when recording some of the more angry political moments on the record. ​​​​​​​

SB: I’m not sure how under the radar she is, but Susanne Sundfør is excellent, no where near enough people have heard of her.

PM: I like to think that our stuff is pretty diverse in terms of mood and messaging. Ibis Budget is taken from our debut album BLEED & BLOOM. which we’re releasing in the autumn, and you’ll find all sorts on there, from slower introspective acoustic cuts that reflect on modern times, to full on batshit ragers like the new single. If there is one overarching theme to the LP, it’s that existing in your early twenties can be emotionally exhausting.

CA: The album holds two opposites in conjunction, and that’s always felt like an important aspect to us as a band. We can be commenting on something political, or throwing light on personal insecurities, but we’re equally just trying to have fun and want the listener to experience that too. I think we manage a good blend of all of the above.

JS: I hope the squeaks, scratches, beeps and boops I manage to coax from my guitars and pedals get the recognition they deserve, especially the accidental ones.

FTS: If each band member were a superhero, what would their superpower and name be?

SB: I’d be The Magnificent Budget-man, my power would be to teach people how to use Excel for maximum efficiency. Oh! And I can fly too.

CA: I’d be Superglue Dude. I may not have the smarts, or possibly even the talent, but I’m the diplomatic glue that holds all this shit together.

SB: I have a very reasonably priced utility belt with extra glue in, ready to assist superglue dude at any given moment.

Check out “Ibis Budget”, the new single from The New Nostalgia!