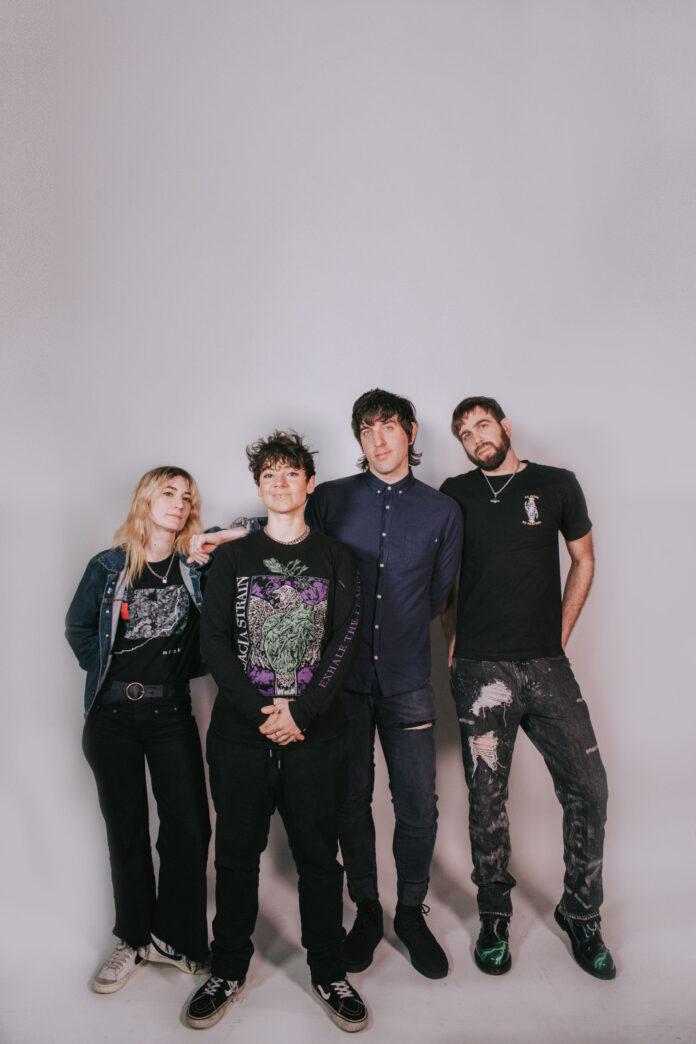 San Francisco indie rockers gloomy june are set to embark on summer tour in support of their EP, Popsick (out June 2nd). They’ve just released their latest single, “This Party Is A Warzone”, an electro-punk track with big energy and catchy melodies “inspired by that energy to party like your life depends on it, mixed in with a self-awareness that the party can’t last forever”. We caught up with gloomy june to chat about the song, how they got their start, and the best – and worst – thing about being a musician.

From The Strait: Tell us about the new single, “This Party Is A Warzone”

gloomy june: This Party is a Warzone is all about tension – from the near-relentless instrumental to the story of the lyrics, it’s an ever-escalating track about partying like it’s the last thing you’ll do, because it probably is. The song was written just as music venues were opening up again in mid-2021, and at all the shows there was an air of desperation to “go back to normal” in the post-pandemic world. “This Party Is A Warzone” captures that energy, paired with a romantic drama.

FTS: How did gloomy june become a band?

gloomy june:  gloomy june formed in early 2021 from 3 members of San Francisco’s The Y Axes (Devin Nelson, Jack Sunquist, and myself), when our drummer moved out of state to become a dad. With new drummer Ash Hyatt, the band felt it was time to start something new. After months of discussion, gloomy june, inspired by the fog known as “June gloom” that surrounds the California coast in early summer, was chosen as the band name.

gloomy june: The coolest show we’ve played so far was a house party in Eugene thrown by Common Koi. It was on a Sunday so we had no false hope that the show would be as amazing as it was, but people came out and packed the house, and everyone was into the music and not just trying to get drunk at a college party. Can’t wait to come back. The weirdest show we’ve played is probably the livestream we did for a corporate event back in 2021. We’d done a few livestreams, but not really one we’d be paid for, so we tried to go super hard for an audience we weren’t even sure was there. We filmed this at The Complex SF, a recording studio that also puts on professional live streams, and they made it as fun as possible for us.

gloomy june:  My music tastes do a bit of an amorphous Venn diagram with my past music taste. There are some things that I loved as a kid that I didn’t like so much in college, and sort of came back to after I became a musician. Each year of my high school life had a different band associated with it: Freshman: Saves The Day, Sophomore: Oingo Boingo, Junior: White Stripes, Senior: Ani Difranco. These all hold up in my opinion, but I grew out of my pop punk phase for a few years and got into commercial folk pop for a few years; I think my love for Bitch and Animal flowed naturally into twee ukulele music (lol), but at this point I don’t think I could handle another song like that or with group chanting. Right now I’m listening to mostly Remi Wolf, Charli XCX, Toro Y Moi, and Jack Antonoff.

FTS: What’s the best – and worst – thing about being a musician?

gloomy june:  The best part is the feeling of sharing your music with other people and seeing live how they connect with it. The worst thing is a tie between doing all the business sides of it (or losing money paying someone to do it), and feeling utterly buried in the mass of content that comes out every day. Actually that’s not so bad, as long as the right people hear you and connect with your music. Maybe the worst thing is carrying gear (lol).

Check out “This Party Is A Warzone” by gloomy june!