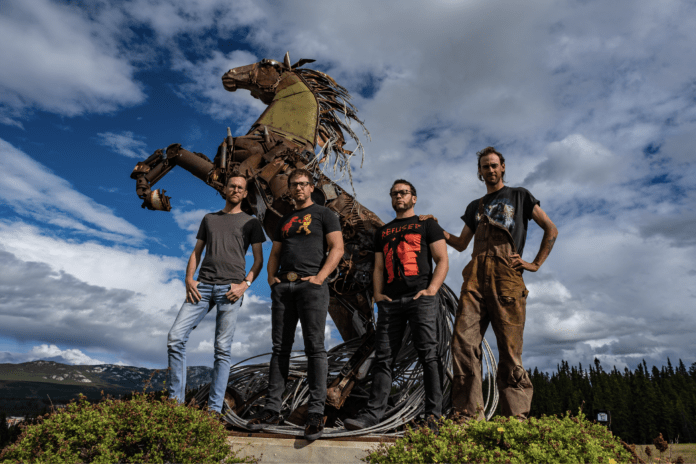 Yukon rock band Speed Control are known for their riff-driven, harmony-heavy style. They’ve just released their new single “Mr. Romance”, and we caught up with the band to learn more about the song, how they got together, and who their musical influences are.

From The Strait: Tell us about the new single, “Mr. Romance”

Speed Control: This song was inspired by the feeling that no matter what you’re doing, you’re letting someone significant to you down, and the desire to prove to them that you’re not crazy, you’ve got this. We wrote and recorded this song in under 3 hours originally. We sat with it for a while, and actually had a version mixed, and ready to go but kept coming back to it. Jan DeVroede helped produce the song and gave us some really key ideas to work off of. After sitting with it for months, and working away, we finally landed on the final version, with huge props to Greg McLaghlin for living with it, adding bits of synth, layers of guitars and making the whole song sound amazing.

FTS: How did Speed Control become a band?

Speed Control: Speed Control came about at the University of Toronto while Graeme was in the jazz drumming program. Tired of hauling drums, he picked up the guitar and wrote some punk rock songs and played some shows with Ben Whiteley (Weather Station) on bass, and a drummer friend named Asher. When he got back to Whitehorse, Yukon, he paired up with Spencer Cole (Weaves) on drums, and brother Jody Peters on bass. We recorded our first album the “A.D.D. Sides” in 2 days, mixed it in a day, then set off on a 2 month tour of BC/AB/SK, burning cds on a iBook as we went. Graeme got the name from when he was heading to a gig, and a “Speed Control” traffic sign in TO blew off and almost hit him. Great name for a band!

Speed Control: Graeme and my (Jody) influences were full of classical and jazz music until the discovery of punk, rock, and metal at age 14 Bands like MXPX, NOFX, Jimmy Eat World, Weakerthans, and Weezer, were huge influences at the beginning of Speed Control, and still are. Bands we’ve added to the list now are Judas Priest, Danko Jones, Iron Maiden, PUP, Foo Fighters, Refused, and Tenacious D (Jody’s favourite).

FTS: What’s coming up next for Speed Control?

Speed Control: We’ve got an EP coming out in about a month, and then a tour through Washington, BC, Yukon, and Alaska during July. That will lead into some fall touring, and an LP launch later on this year.

Check out “Mr. Romance”, the latest single from Speed Control!