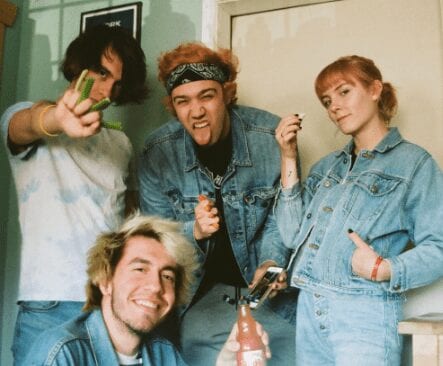 Eclectic indie rock group Sleepy Gonzales is a tough one to describe. From dream pop tunes to garage punk jams, they’re carving out a niche all their own. With the new release of their song “Abandoned Amusement Park”, we caught up with the band to find out how they got their start, what they’re listening to, and what we can expect from their live show.

From The Strait: How did Sleepy Gonzales become a band?

Sleepy Gonzales: Cristian and Beni have been writing songs since we were teenagers. We knew Allyson throughout high school, but had no idea she could sing. As soon as we heard her, though, we pretty much begged her to be our singer. Her voice was just special.

FTS: Tell us a bit about your live show, what can future audiences expect?

SG: Our shows are like peanut butter, we have both a smooth & chunky type. The smooth shows are very emotionally lush, where we try to plant flowers in people’s hearts. The chunky shows are where shoes and makeup come off, and we try to awaken peoples’ inner crocodiles. Both are fun in different ways.

FTS: What artists / bands are you guys currently listening to?