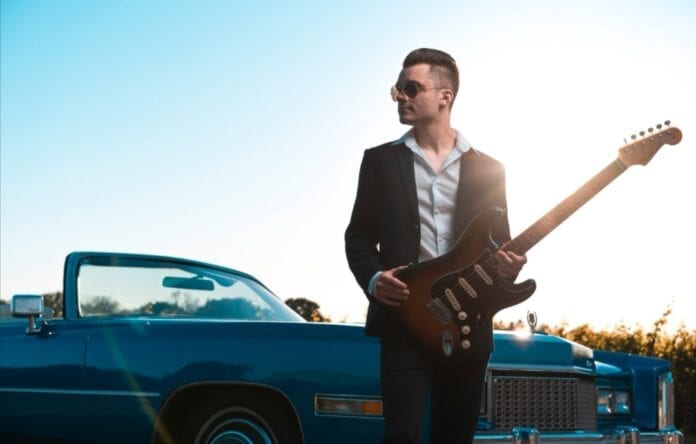 If you don’t know Riley Michaels yet, trust us – you will. The Niagara musician just released a brand new video for his single “Now I Know”, a catchy track you’ll have a hard time getting out of your head. We caught up with Riley to chat about the song, his favourite guitar gear, and his musical influences.

From The Strait: Tell us about the new single “Now I Know”.

Riley Michaels: The song’s message is simple, and it is upfront and bold – “Now I Know what not to do.” This is a song detailing a person who has had bad experiences with relationships, and now that person has a grip on their desires, and what they truly want out of a relationship with a person. They know the signs and the red flags now, and they are hell-bent on not making the same mistake twice. It’s about giving your all, and only getting a little bit in return, and how unfair it is. It’s a warning to not get too attached to this new love interest because you can see the red flags, and you don’t want to get hurt again. The recording process took months to do. We started with little demos and little bits and pieces of songs that eventually we just pieced together. But it all started with a funky bassline and an in-your-face drum beat.

RM: Growing up, (which I am still doing at 19 years old, LOL!,) I was really into rock and punk bands! I loved bands like Led Zeppelin, Green Day, and Aerosmith. While I still love those bands dearly, I was introduced to artists more in my realm, like John Mayer, Prince, and Elvis, whom I would say are my three biggest influences currently.

RM: My favourite guitar has to be my Fender Classic Series 60’s Stratocaster. It isn’t an original Strat, it’s not an American Strat, it’s not even an expensive Strat, but I’ll tell ya, it plays and sounds better than any other Strat I have ever played. Other equipment that I own that sits at the top of my list are my Fulltone OCD Overdrive Pedal,my Strymon BigSky, my EHX Q-Tron+, and my Boss DD-3 Delay Pedal. My favorite amp is my Fender ’65 Deluxe Reverb 1×12 Combo. Punchy and warm! I also have been fortunate to have been endorsed by an ampcompany starting up out of Cambridge, Ontario, called Norfolk & Jarvis. They make a really impressive solid state amplifier that sounds like a vintage Dumble. Impressive to me!

FTS: You’re an extremely hard-working musician, but are there any non-musical things you enjoy doing?

RM: I have lots of passions, actually. My two biggest passions in life are Music and the Martial Arts. I have been training in Traditional Japanese Shorinji RyuKarate for over 15 years, and I currently hold a First Degree Black Belt, also called a Shodan. I have been so fortunate to travel and compete at so manytournaments, as well as have the opportunity to make many great friends and connections through the Martial Arts! I would not be who I am as a musician, or as a person without the Martial Arts.I am also a SCUBA Diver, and have filled my free time from COVID up with Scuba adventures!

FTS: If you could play a show with three other bands or artists (with you headlining, of course), who would you love to play with?

RM: It would be SO much fun to perform with these three bands/artists:
George Michael
Prince
John Mayer
I think it would be so fun to hold a show with those three artists because they are each so different, and all three of them are musicians that I have looked up to for a very long time!

Check out Riley Michaels’ new video for “Now I Know”!