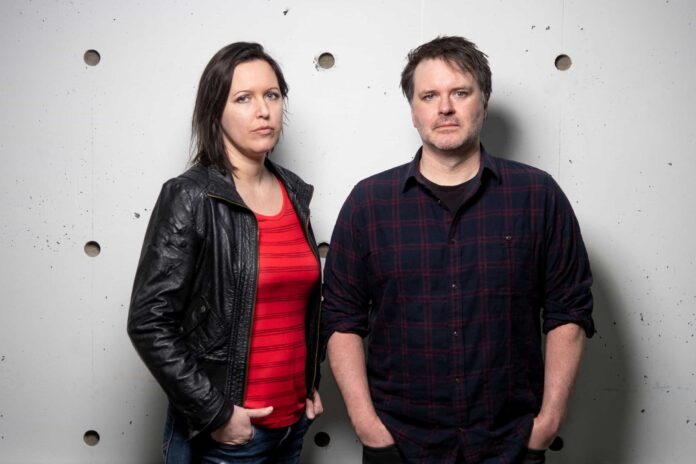 Ottawa-based ethereal alt-rock/electro-pop duo Paragon Cause are back with a brand new single, “Lost Cause”. Once again,we’ve caught up with them for a quick Q&A to chat about the new song, their dream festival line-up, and advice for new musicians. Give it a read, and check out the brand spankin’ new video below!

From The Strait: Tell us a bit about your new single, “Lost Cause” What was the inspiration for it? And the video?

Paragon Cause: We had a lot of fun recording that song. The interesting thing, it almost didn’t happen. Michelle writes 100’s of amazing songs, but she never writes them down. Sune Rose (of The Raveonettes) was in town recording with us at the time. Sune and I (Jay) were out getting food and walked into our house. We heard Michelle playing and singing in the home studio and we immediately looked at each other. We ran downstairs and Sune told Michelle to keep playing and we recorded the song in its entirety. If we didn’t walk in at that moment, it probably wouldn’t exist.  We all knew it was special, so the three of us spent time crafting the song and making it sound epic. In our minds, we wanted it to sound like a chant, an anthem.

The meaning of the song evolved from Michelle being able to voice her frustration with the problems that women face in the criminal justice system.  It is meant to serve as an anthem for women everywhere. To keep going, keep fighting for what is right.  The Netflix show “Unbelievable” deals with two separate women’s treatment by law enforcement following a rape.  Spoiler alert: the second scenario would only exist in a dream world.  I fear we may never catch up, hence her lyrics You’re a lost cause, you mean nothing.

As for the video, we originally wrote a whole story, a sci-fi kind of story that we were going to turn into an animation, but instead, we used that story and made a graphic novel/comic that will accompany the upcoming full album. So, we decided we wanted to make a video that demonstrated through images, what we were feeling when we wrote the song. We wanted somewhat of a stereotypical synthwave video with the idea of a happy facade, all the bright lights you see on the TV and news.  Our version implores you to look under the surface of the flashing lights. It was meant to symbolize the distraction of life and the lies people tell. There are a lot of visual metaphors and symbolism hidden within. Some obvious, but the majority remain more obtuse. The obvious focus of the video is women’s rights, but there are references to Cape Breton’s poverty, religion and many other issues important to us. The scars of trauma can come from many sources, and we present many of them within the imagery.  There are some images in that video that may strike a nerve to people in Canada, but we feel it is important. Our goal wasn’t controversy, but rather reality. This is the world we live in.  Even with all the positive changes in the world, some things never change.  When you look deep under the grass, you often find the insects crawling.  We didn’t want to hide from the images we all see on TV, the news and the internet. Similarly, they never seem to change and history repeats itself.   As Perry Farrell said, nothing’s shocking. We did, however, want to be sensitive with the video. We wanted to ensure we were not being exploitative.

FTS: If you were curating your own music festival (with Paragon Cause as main headliner), what other acts would you want to fill out the bill?

PG: a) The Raveonettes

b) A Tribe Called Quest

f) The Mama’s and The Papa’s

FTS: So many people dream about being successful musicians, but often don’t realize the scope of work and difficulties involved. What advice would you give to a new musician?

PG: Well, we try to not have unrealistic expectations and I think all musicians and artists in general need to think the same way. We define success the way we want, not how others define it. We already feel successful as we wrote a lot of music that we are really proud of and that people want to hear. That is very important as those who make unrealistic expectations are doomed for failure. However, everything in life is the same, you may have the talent but if you dont have the drive and work ethic, it doesn’t matter how talented you are. We find alot of musicians think you just randomly get discovered like on American Idol, its a fairy tale, that only happens to the 0.00001% You need to push through the challenges and learn from your mistakes. You need to recognize your weakness and either improve them or fill them with someone who has your weakness as a strength.  You also need to take chances. Scott Cohen, Sune’s manager, gave us that advice.

We try to take chances and do what we want and play what we feel. Dont hide from who you are, make the music you want to make. If you like pop music, make pop music, don’t feel guilty you are not ‘indie’ enough. You need to be yourself but also move outside your comfort zone, that is usually when you find the magic. Its easy, but boring,  to keep the status quo. Also, be nice to other musicians and fans, it goes a long way.

Finally, don’t be afraid to ask for help. Even the best musicians in the world hire a producer as an extra brain to help record and craft a song.

FTS: What’s next for Paragon Cause?

PG: We want to continue to write and record more music and hopefully help produce other bands music. This past Jan (2020) Sune Rose of The Raveonettes came back to Ottawa and we recorded another album’s worth of material for 2021. Sune sang and played guitar on this album, so it is going to be amazing. We decided that we are going to continue to record as a three piece for albums. However, Paragon Cause the duo will continue to record and likely release some EP’s and singles over the next year.

We are really proud of our development as artists since we started playing together 2 years ago, to be honest, we just want to continue to develop as musicians and create music that people enjoy as much as we enjoy it.  As it stands right now, we are going to play some shows and hopefully meet with Sune again soon and record more music.

Check out the video for the latest single from Paragon Cause, “Lost Cause”!